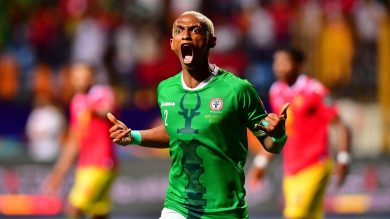 GK – Brahim Soulemayne – SFG’s Official Banter Sponsor of AFCON 2019, Brahim Soulemayne rolled back the years to give us a performance of AFCON goalkeepers gone by. Broadly a competent bunch these days with minimal slip-ups or moments of madness, Brahim (or Diallo as he was known in one match) perfectly balanced making some tidy saves with some goalkeeping japery. The particular highlight was when he rushed out to absolutely demolish an onrushing Moussa Marega in very Ralf Schumacher style, escaping with a booking. Exceptional.

RB – Ahmed Elmohamady – Whilst no one in Cairo had a Ahmed Elmohamady mask, the right-back did an excellent job of guiding his side through the pressure that hosting brings. One of the most experienced players at the tournament, he ably did what he’s been doing for Egypt for what seems like millennia, helping organise the backline and provide a nice overlap when his winger needed it. Whilst the hosts haven’t yet lit up the tournament, Elmohamady will be pleased with his contribution so far.

CB – Abdoul Ba – Ohh boy oh boy, what a man. What. A. Man. The 6ft 7in man from Mauritania secured himself a place in AFCON folklore this tournament. Doing a clap-worthy job of trying to manage a limited side from conceding too many goals, especially given their preference for big expansive football, just looking at his lumber about the pitch was a joy. Bringing back memories of Australian internet sensation ‘The Big Cow’, the camera men did a great job of making sure that the full extent of Ba’s height and width were in the shot, he should be proud of Mauritania’s performance at their debut AFCON.

CB – Michael Ngadeu-Ngadjui – An unspectacular player in an unspectacular team, Ngadeu has suddenly established himself as a solid presence at the heart of Cameroon’s defence. Whilst only managing to score two goals in the group stage, he helped his country tediously grind their way to some not-so-tasty 0-0 draws to ensure their passage to the group stage. It’s not his fault they’re so blunt going forward.

LB – Achraf Hakimi – Whilst stationed out in an less familiar left-back position for two of the group stage games, Dortmund/Real Madrid’s silky full-back did his bit to get up and down that touchline. Typically ambitious in his forward play, he facilitated Morocco’s attacks nicely as an outlet on one side, even if his pullback from the byline ultimately came to nothing in a mixed performance so far from the Atlas Lions.

RM – Riyad Mahrez – Whilst there’s not much more that needs to be said about Riyad Mahrez’s importance to this team, Algeria’s new lease of life rubbed off on their captain as well, blending in nicely with the rest of the team to give some glorious performances. Back to his tricky, cut-inside-y best, he was flooring defenders all day long. Algiers will be hoping he can do it when the games get tough in the latter stages.

CM – Ismael Bennacer – Arguably the surprise package of the tournament, Bennacer has proven himself to be an exceptionally valueable cog in this exciting, well-oiled Algeria team. You would need George Orwell to come up with a new-1984 style word for just how tidy Bennacer has been, making the right passes at the right time, dribbling out of tight spaces, whilst also getting stuck in to get possession back for his team. At 21, he’s like a more interesting Nabil Bentaleb.

CM – Amadou Haidara – Part of a growing body of exciting, dynamic Africa central midfielders, Haidara played a key role in Mali’s impressive group stage performance, as they topped the group with two wins and a draw. Whilst the double-Adama Traore excitement took centre stage, Haidara’s diligent play in central midfield was key to freeing up the entertainer talents of players like Traore and Djenepo. Given a new lease of life under African Uncle Mohammed Maggassouba, Haidara is one of the many things to enjoy about this Mali side.

LM – Carolus Andriamatsinoro – The oldest-looking man in the world, Andriamatsinoro proved himself to have younger legs than he does a face during Madagascar’s group stage campaign, chipping in with two goals to make them the officially designated Surprise of the Tournament. Playing as part of an exciting front-three, his willingness to put the work in defensively as well as provide a threat at the other end was representative of the whole team’s performance, as they look to make history in their debut year. He also saved the commentator some effort by having Andrea on the back of his shirt, which was nice of him.

ST – Emmanuel Okwi – The man who’s been ripping up East African football for almost a decade now, Okwi’s two goals were imperative as they beat DR Congo to second place in Group A. Nodding in during the shock win over DRC and then getting an early goal vs Zimbabwe, he has been the shining light in an impressive Uganda side, who had their first victory in their AFCON history this year. Still only 26 but with plenty of experience on his shoulders, Okwi will be looking to expand his impressive scoring record to expand Uganda’s burgeoning international reputation.

ST – Jordan Ayew – An often tedious, frustrating presence in this Ghana side, Jordan Ayew has very much proved his doubters wrong so far. Freed from the burden of playing next to Asamoah Gyan, Ayew and his brother Andre have been two good point in what has otherwise been a mediocre tournament for Ghana so far. Struggling to find much creativity from anywhere, Ayew has been efficient with his chances, his finish against Benin in the opening game a particular highlight.