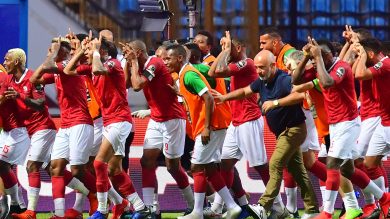 The level of coaching has been abysmal

The mind is inundated when thinking of who has been the worst coach of the tournament so far. And we don’t just mean for the minnows like Tanzania and Kenya, who were always going to be limited whoever their coach was.

DR Congo’s Florent Ibenge came into the tournament at crossroads and the reservations around his tactical nous and selections have not gone away. Not much was expected from Kenya and Tanzania of Sebastien Migne and Emmanuel Amunike, respectively, but both of them walk away with their reputations lowered.

It’s clear, as always at AFCON, that we are not witnessing compelling coaching. Some of the coaches remaining in the tournament may just have to blag it to the final.

The standard of shooting just as much

We’ve seen a lot of the so-called outsider showcase some intricate, crisp passing moves and great interplay, but much of it counted for nothing. Angola went up two notches with the introduction of Gelson Dala for the last two games, but it’s difficult to score when you miss the target from two metres like Wilson Eduardo did. Mauritania surprised even their regular followers with some beautiful diagonals, straightforward but precise passing and great set pieces; but again, they only scored once in a game where it didn’t really mattered, and finished the last match with some desperate attempts from 40 metres or so.

Finally, the Southern African trio. Zimbabwe were way more fun than two years ago, but even the main director Khama Billiat wasn’t on with his finishing and Knowledge Musona chipped in with his own “worst miss of the tournament” candidate. South Africa love a one-two outside the penalty box, but once they get inside, it gets all-round horrendous. Scuffed shots, overhit shots, you name it. Namibia, then, are basically a South Africa in a larger, even more incisive package. More of their players seemed to be involved in interplays (the likes of Shitembi, Hotto or Shalulile showed tons of silk in Egypt), but sadly more of them also seemed to be wasteful when presented with golden chances.

In the end, it seems like only Malians are capable of beautiful, mid/long-range shots for a goal. And that’s not what the home continent of Alain Traoré is known for nor deserves.

The 24-team format has been a slow burner

Bar Madagascar, the identity of the other teams is not a surprise and the field for the knockout stages almost looks like what a typical Cup of Nations would look like. There has been no major surprises, bar Madagascar’s comfortabe win over Nigeria.

So far it has been a festival of football where some teams have been able to have an X-ray of where they stand compared to the superior sides in Africa but the lack of urgency has understandably frustrated the neutrals. Drama is what makes tournaments memorable but we should expect little of that in this format.

…but the format also gives sides a reprieve

DR Congo and South Africa have made it to the knockout stages by winning just one game and losing their other two whereas Tunisia have made it through drawing all their three games. In the past, losing one of your first two games of AFCON let your campaign on a tightrope. That’s no longer the case as 3 or 4 points can do the job.

In a way, it’s the beauty of this format which ensures some of the top sides can afford to lose their games or not accumulate enough points and still ‘bury their mistakes’ as it were. These sides now have the opportunity to write a second, better chapter to their story, as many recent champions, such as Nigeria in 2013, have done so.

Morocco and Algeria look the most cohesive teams

Morocco and Algeria have looked the best teams so far. Morocco have largely been their typical selves, too dynamic and frenetic for everyone in their group. Algeria qualified at a canter, beating Kenya and Tanzania with ease, and then seeing of one of the tournament favourites Senegal. Both have notched nine points. Unfortunately it could count for nothing.

The AFCON winners in recent memory have all won it through being difficult to beat than playing swashbuckling football. The AFCON graveyard is full of teams that played well only to stumble when it mattered most.

Two of last semi-finalists are still figuring it out

While Egypt have basically remained the same, relying on two individuals instead of one upfront and still defending in a passive block for too long periods, Ghana and Cameroon are in a different kind of world two years removed from appearing in Afcon semi-finals. And both coaches, Kwesi Appiah and Clarence Seedorf, are arguably no wiser about how they want their teams to play after they had spent much of the group stages wildly tinkering.

Seedorf was going back and forth with his formation, juggling a classic 4-3-3 with a 3-4-3 designed specifically to neutralize Ghana (and Cameroon), and freshly a 4-3-1-2 diamond in the last game. We therefore still can’t be sure what is Seedorf’s preferred system and formation; the only constants that remain are Georges Mandjeck and the inclination to pass the ball at the back for a whole eternity.

Meanwhile, Kwesi Appiah is a much-maligned figure in Ghana, but he has got some things correctly, such as inserting the overlapping Baba Rahman to the starting line-up or moving Thomas Partey further up the field in the second half versus Guinea-Bissau. Nonetheless, Black Stars remain an uninspiring side tarnished by a persistent lack of tempo in build-up and their inability to pick out clever runs from Jordan Ayew on even a semi-regular basis.

Any ‘serious’ football country that hosts an AFCON tends to win it, and with the home advantage Egypt have it will take a team that has the mentality and quality to beat them on home soil. The closer they get to the final, the more passionate the support should get and in such a passionate country off-field antics won’t be out of question.

Egypt have shown a dependency on Salah and Trezeguet to come up with the moments of brilliance, but it is already apparent that, while Egypt may have to win at least one shootout, they have a hell of a 12th man to spur them on. That is clear on the ground in Egypt and in the stadium. From a pure atmospheric level, most sides left in the tournament are not equipped to face Egypt and beat them under conditions Didier Drogba feared he wouldn’t get out alive back in AFCON 2006.