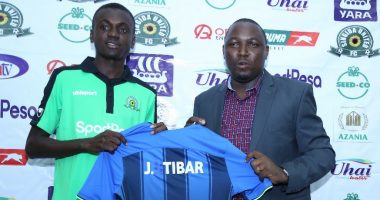 Before the Sportspesa Super Cup final between Gor Mahia and Simba, members of the Simba board were in the tunnel jovially winding up Gor Mahia players that Simba will embarrass them in front of their own fans.

Mehdi Kagere, then Gor Mahia’s chief striker, just looked at them, silently, while they were up to no good. By the end of the game he had made us shut up.

With his contract expired the Rwandan transferred to Simba soon after that final, joining an attack that already had the firepower of John Bocco and Emmanuel Okwi. It is now a question of whether they can all play in the same team together with the Simba management keen on squeezing the trio into the same team.

Strong, pacey and relentless in pursuit of goals, Kagere arrives with the sort of hunger that makes you believe he’d score goals anywhere any time. A goal in the community shield on Saturday quickly endeared him to the Simba faithful. At 31 a move to more lucrative pastures has now long passed, with a short stint in Albania proving to be unsuccessful.

It seems Simba may be as good as it’ll get and that will suit them jjust fine as Kagere seeks to make the final mark of his career.

The Zanzibari left Azam on loan last season to move to Singida United in search of regular first-team football, and it took just a handful of games into the season to establish that it would be a fruitful move for both parties.

Yahya immediately impressed in the first half of the season as his team kept pace with the pace-setters. His calm demeanour when in possession, thrown in with the odd nutmeg and sombrero, highlighted him as a rare midfielder in Tanzanian football. Regular football with Singida, and the captain’s armband to go with it, saw him grow as a player and force his way into the Tanzania national team starting XI.

The return to Azam comes with some good luck charms. The departure of midfield stalwart and captain Himid Mao to Petrojet in Egypt opens up the evasive midfield position that pushed him away last season.

What’s more, Hans Van der Pluijm, the coach that showed so much belief in him in Singida last season, has been named the new Azam coach. Under his guidance Yahya should be confident that he can start to state his credentials as one of the best midfielders in Tanzania by steering an Azam title challenge.

The Zambian has signed on a one year contract but many believe that season should be enough for him to make his mark in Tanzania. The man known as ‘Triple C’ could have quite the impact going by his pre-season performances, where he has shown he has the ability to be the chief creator for Simba’s cohort of strikers.

With last year’s star signing Haruna Niyonzima struggling for form and fitness, Simba lacked an advanced central player of Chama’s type last season. They certainly aren’t lacking In that regard this season, with Hassan Dilunga also on board, but the former Lusaka Dynamos captain will be more than an able deputy, as he showed in the ‘Simba Day’ friendly versus Asante Kotoko, and threatens to make Niyonzima a distant memory.

A game-high five key passes in the Asante Kotoko friendly displayed what he was capable of. Perfectly measured through-balls are something the Msimbazi faithful certainly appreciate and Choma brings that in abundance.

The 20-year-old finished the season in a rich vein of form which saw a summer scramble between the big guns in the league for him. His willingness to cover the hard yards in attack and strong upper body caused issues even for the most distinguished of centre backs in the Tanzanian Premier League.

The crowning moment was a tireless performance versus the then champions-in-waiting Simba which he capped off with an all-action goal that displayed his best attributes.

In the end he, rather predictably, chose champions Simba over the rest. It remains to be seen whether this was a wise decision, with concerns over whether he will be able to hold a place in a side stacked up top with Kagere, last season’s top scorer John Bocco and Emmanuel Okwi, not to mention also new signings Marcel Kaheza and Mohammed Rashid competing for places in attack.

What’s guaranteed is Salamba will play with typical intrepidness when presented with the opportunities.

Tibar is a talent that would have been off the radar before the rise of organised Tanzanian street football in the major cities. The 17-year-old made his name in the city of Mtwara where Pride FM’s yearly street football tournament saw him break out as one of the players of the tournament last year

Those exploits remarkably saw him parachuted from amateur football straight into Tanzania’s professional top flight with Mtwara-based Ndanda FC. He didn’t disappoint in his debut season, playing with the youthful abandonment befitting his age. The youngster was one of the most watchable players in the league, his ability to beat a man making him a draw to Tanzanian football lovers.

Despite that, he also showed the rawness that was still there in his game. Over-elaboration on the ball and selfish runs showed the street football edge to his game which he needs to iron out if he is to progress further in his career.

Nevertheless Singida United saw enough to acquire his signature. A more organised and technically superior team, in comparison to Ndanda, should give him the platform to flourish even further.