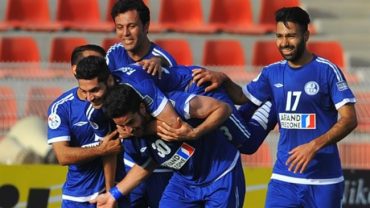 We have hit the mid-stage breather of the AFC Champions League group stage, and while we’re not foolish enough to predict who’ll actually win the tournament at this stage, we can instead start making our evaluations on the success rate of individual leagues. The obvious winner (albeit predicted) has been the Chinese Super League; with the Brazilian lead duo of Shanghai SIPG with Hulk and Oscar and Jiangsu Suning with Alex Teixeira and Ramires going three from three in their opening fixtures. While reigning domestic champions Guangzhou Evergrande remain undefeated alongside recording the biggest victory of the stage, smashing Hong Kong’s Eastern 7-0 at Tianhe Stadium.

A much quieter success story comes from the West, through the re-emergence of Iranian clubs from the Persian Gulf Pro League, with all four of their representatives primed for a decent shot of progression going into the final stretch of the group phase. The two headlining this upward turn of form are Tehran heavyweights Esteghlal FC, no stranger to this level of continental competition and their namesakes Esteghlal Khuzestan who have surpassed many people’s expectations in what is their debut ACL campaign.

Considering their status on both the domestic and continental front, they can be crudely likened to the Manchester United and Leicester City of Iran; one a legendary club backed by an impressive fan base across the nation and further afield, the other the reigning domestic champions who were fighting relegation only the year previous. While this is a starting point of basic comparison, both can point to unique struggles over the last 12 months that have made their success over the last couple of months ever more impressive. Both sides signed off their first half campaigns in the best possible way in top spot ahead of illustrious company in the form of their Middle East rivals.

Esteghlal Tehran, (in theory anyway) are expected to be competing at this higher level consistently, however it’s the club’s first appearance back at Asia’s top table in 3 years. They are also without a domestic title in 4 years, meaning the Blues needed to scrape past another sleeping giant in recent ACL seasons in the form of Al Sadd of Qatar to just make the group stages at all, this via a thrilling playoff penalty shootout victory. Alongside this came continual struggles domestically. The club were imposed with a devastating transfer ban at the beginning of the year and subsequently trail city rivals Persepolis in a now seemingly insurmountable domestic title challenge.

It hasn’t only been points that they’ve trailed their key rivals this term, it has been quite clearly a gulf in talent and prestige of their playing staff. Persepolis can call on a raft of national team talent; the likes of Iran’s number one Alireza Beiranvand, defenders Jalal Hosseini & Ramin Rezaeian and the league’s top scorer Mehdi Taremi. While many rival Iranian fans may scoff at the fact that Esteghlal have a below par squad, the fact the transfer window snatched away the international quality of Andranik Teymourian and Server Djeparov at the last minute can’t be argued against being a decisive blow to any team. 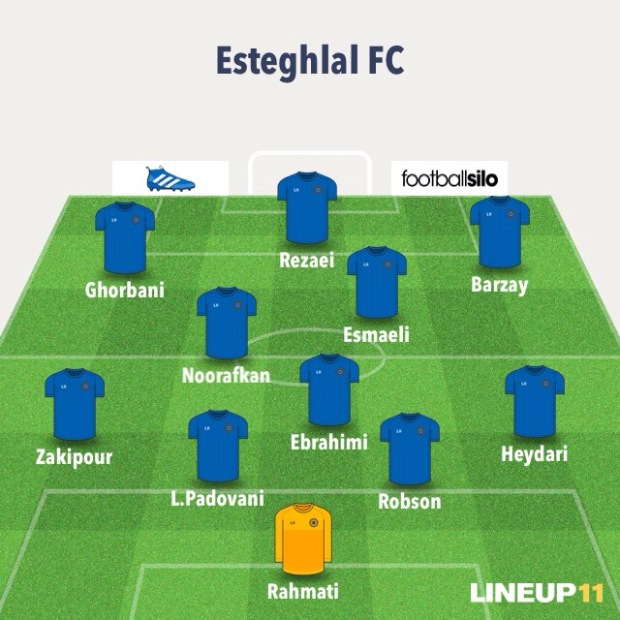 In their place is a mixed squad of young, hungry, broadly attacking players who have a point to prove, alongside a highly experienced core of defensive players who are beginning to wind down their careers. That defensive block, that has conceded the second least in the Western side of the ACL after Esteghlal Khuzestan, comprises of former Iranian international Khosro Heydari, alongside Brazilian Leandro Padovani, a reliable head in Iran over the last few years, in front of the outspoken yet continually dependable Mehdi Rahmati. This has offered the solidity needed to burst forward, and how – with the quality and variety in attack as fluid and as devastating as its been this year.

Alireza Mansourian who moved in over the summer to replace Parviz Mazloumi, after a successful spell with Naft Tehran (leading them to the ACL quarters in 2015), may have had a rough start to his tenure, but since the new year he’s found his groove. Much of this has been down to the general integration of some of his former players at Naft, bringing in the aforementioned Padovani, left back Milad Zakipour and wide man Ali Ghorbani last summer. The team relies heavily on emotion and team-spirit, encapsulated in their 3-2 win against Persepolis in February’s Tehran derby, where Esteghlal were largely second best, only to win the emotional battle to strike at the crucial points.

Back to their attack; their greatest weapon, a statistic they lead the way domestically in, even over the league pace-setters Persepolis. The star turn, Kaveh Rezaei, into his second season in the ACL after firing Zob Ahan to the knockout stages last year, leads the line expertly, but his role is much broader than purely goalscoring. Running the channels, creating space and linking up with his attacking colleagues in the final third, his personal performances have proved to be fruitful in the early days of this ACL campaign. One such name benefiting in coming in late to the box to feed off Rezaei is Farshid Esmaeili. A wonderful talent who has started 2017 in a great vein of form, scoring 3 in his last 7 matches, book-ended by beauties; an equalising volley in the derby, before a cut in and hit after a corner against Lokomotiv Tashkent this week.

Their matches individually have been all but accomplished perfectly, finishing up 3-0 and 2-0 victors against Al-Taawon and Lokomotiv respectively in the last fortnight. The opener, away in Dubai to Al-Ahli, will be the match they’ll look back and rue however, after managing the contest well throughout before slipping to a final minute winner for the hosts. That being said, Esteghlal sit handsomely in top position, primed for a passage through to the knockout stages, and on current form they should be confident of going through as group winners, some way to meeting their fans and those fascinated neutrals who are looking forward to seeing Esteghlal where they are thought to belong.

In stark contrast Esteghlal Khuzestan are the babies of the ACL, with little expectation affixed to their campaign. Along with Al-Taawon of Saudi Arabia, Esteghlal Khuzestan are making their way in the group stage of the competition for the first time. Their existence doesn’t even stretch back a decade, with the club coming into being in 2011/12, so to make such headway in such a small space of time is more than admirable. After last year’s title victory, a dramatic demise was predicted, and while they’ve returned to their mid-table contesting domestic form after much of the squad were usurped alongside their departing coach Abdollah Veisi last summer, Esteghlal Khuzestan have embraced the ACL and look an outside shout for a late finals appearance.

While their Tehran namesakes struggled in their one away match, losing in the UAE, Khuzestan trumped their domestic rivals by clinching a victory away in the Emirates against runaway league leaders Al-Jazira, and have also clinched a point against the Qatari league leaders Lekhwiya this last week. Match after match history for this fledgling club continues to be written; 1st – their first match and first win in the ACL (against Al-Fateh in Muscat), 2nd – their first away victory in the competition (against Al-Jazira) and 3rd – their first home match in the ACL (a memorable draw against another ACL high flyer). With the return legs to come, it promises to be eventful whatever the outcome in Ahvaz. 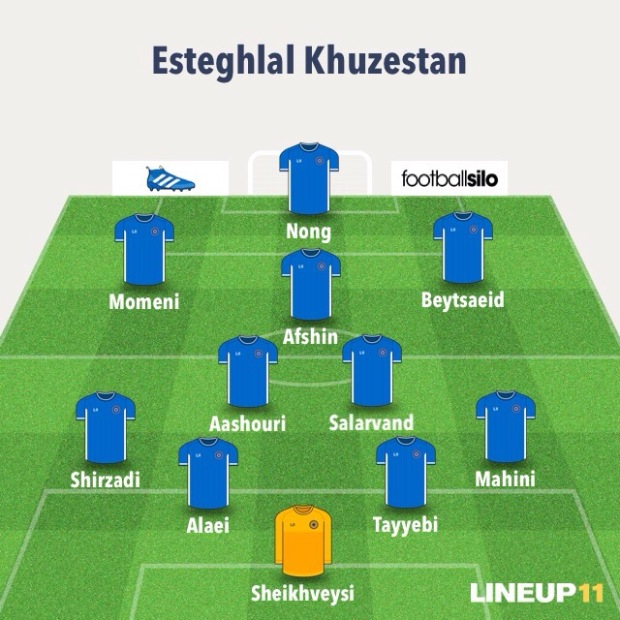 While their domestic league success was down to a stringent defence, something that hasn’t gone away overnight after only conceding one goal in three matches, their attack has been the most eye-catching aspect of their play. The loss of Rahim Zahivi in particular from last season’s title winning side took away the team’s focal point, however with the introduction of serial ACL-team hopper Aloys Nong (in his third consecutive year of ACL football where he’s played for 4 different teams) new coach Sirous Pourmousavi has been able to mould their threat into a fluid frontline. Nong’s movement with Arash Afshin (another close season signing from Esteghlal Tehran) in behind him, and Hassan Beytsaeid out wide, has worked like a charm, the latter in particular looking a talent rising to the big occasion after years of playing in the Iranian second tier, he’s taking the stand when most needed.

The team is full of personality, from the interchangeable front three back to defence where Mohammad Tayyebi (ranked number 44 in our #SFGTop100 last year) aims to up his game yet again. You would be forgiven in making the comparisons yet again with the Foxes from England who have also turned in their best performances in the Champions League. They’re a likeable underdog, which has recently been the flavour of the month in the ACL, particularly in the West, with fellow Iranians Zob Ahan and Uzbek champions Lokomotiv stunning the group stage last year with a similar approach of a stiff defence and an interchangeable counter attack.

While these two sides have stood out the most, for me neither have the resources to potentially make November’s final. The cream usually rises to the top in the latter stages, and when you’ve got the likes of Al Ain, Al-Hilal, both Al-Ahli’s and even Persepolis, both Esteghlal’s may struggle in the key moments where their quality may be up against it. It does however point to a nation who have been dominating the continental national team landscape over the last few years, which has a domestic base which is improving (excitingly in attack). With Farshid Esmaeili, Kaveh Rezaei and Hassan Beytsaeidin particular catching the eye. It’ll be interesting to observe their progress as we head into the next round of ACL.