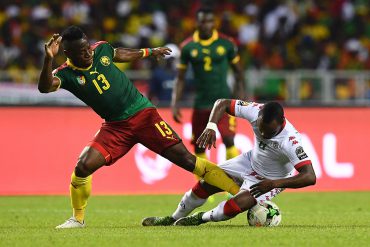 The outstanding performers from the tournament.

It was a close call between Fabrice Ondoa, Essam El Hadary and Herve Koffi. Though Koffi may not be everyone’s cup of tea, especially after his penalty miss in the semi final, the 20-year-old excelled at his first international tournament. ‘The Cat’ introduced himself as a sweeper-keeper in the opening game with an excellent tackle on Christian Bassogog when he was through on goal, and then followed up with a series of composed, regal performances belying his years. Ondoa and El-Hadary had situations, especially in the final, where you felt they could have done better; penalty miss aside, it’s hard to think of a moment where Koffi could have done better.

A survivor and stalwart of Egypt’s 2006-2010 epoch, it’s fair to say the Al Ahly full-back isn’t thirsty for AFCON medals. He started the tournament at right back and finished it at left back following an injury to Mohamed Abdel-Shafy after two games and had a largely error-free tournament. The transition from Fathy to Abdel-Shafy was so seamless, with the left side of the defence remaining water-tight, that the casual observer could be excused for not having noticed the switch.

When AFCON 2017 highlights are replayed over the coming years it’ll be Vincent Aboubakar’s tournament-winner that will be the principal highlight, with the ball flicked over Gabr’s head before the striker fired home. That moment will be a misrepresentation of Gabr’s dominant, resilient backs-to-the-wall defending throughout the tournament. Him and his accomplice Ahmed Hegazy rarely looked like being beaten, particularly in the air, and they were a key part of the system that was nearly successful in firing Egypt to glory.

There were better individual centre backs in the tournament, like the flawless Kara Mbodji of Senegal, but the dutiful, no-nonsense Ngadeu-Ngadjui was one of the players that typified Cameroon’s collective spirit. He scored the winner against Guinea-Bissau to allow them the breathing space to draw in the final game, and the opener versus Ghana in the semi final. Although he’s a centre back, if he’s cheeky enough, he’ll never forget to remind anyone willing to listen that he finished the tournament as Cameroon’s top scorer.

The only home-based player in the Burkina Faso squad, the left back wasn’t a great ambassador for the domestic league on his tournament debut versus Cameroon, with dallying on the ball and positional errors aplenty. From then on, though, he rarely put a foot wrong with dogged and energetic performances, including a tackle reminiscent of Maldini in the 2-0 win over Tunisia. A long line of players have occupied the left-back spot for Burkina Faso in the last four years, from Saidou Panandetiguiri to Narcisse Bambara, but Coulibaly will have hoped that he has made the position his own.

A model of consistency, as ever. Calm on the ball, wise with his choice of pass and ever willing to carry out the destructive duties in midfield, the Burkina Faso captain went to war again in midfield in another excellent tournament, perhaps better than his 2013 effort. Kabore announced his intention to retire after this tournament and he will be hard to replace. At just 28 years of age you sense Kabore still has more to give and Burkinabe fans will be hoping he makes a U-turn.

It was his pass that found Vincent Aboubakar for a goal that will go down in AFCON history. Quick to the tackle and a willing shooter, he was ever-present in a Cameroon team that needed leadership and mettle, playing every single minute from the opening game to the final itself. Though there were midfielders in the tournament who had more eye-catching displays, like the Moroccan duo of Mbark Boussoufa and Karim El Ahmadi, Siani quietly went about his business and, like Ngadeu-Ngadjui, typified the spirit of this Cameroon side.

One of SFG’s players to watch prior to the tournament, and he didn’t disappoint. Often unfavoured by past Morocco coaches, the versatile 32-year-old has been one of Herve Renard’s most trusted players. His poise in possession, versatility, set-piece threat, and mobility made him a critical player in Morocco’s 3-4-3 formation, and he and Karim El Ahmadi outplayed every midfield they came up against. The standard of players in front of him wasn’t good enough, but there’s no doubt that Boussoufa was one of the tournament’s hardcore performers in a team that was a tad unfortunate to go out early.

Egypt’s star player was often an isolated figure and, hindered by a one-dimensional midfield pivot, he didn’t have an AFCON that set the world alight, so there may be some contestation as to why he made the SFG team of the tournament. But Salah made the most of the little he had, playing a part in some of Egypt’s best attacking moments in the tournament. His goals against Ghana and Burkina Faso, and his assist in the Uganda win and in the final, showed his class and potential to win games on his own, particularly in high pressure moments.

Named CAF’s player of the tournament, and deservedly so. The Denmark-based winger did not have a bad or average game. He consistently played brilliantly in every single game and his confidence rose as the tournament went on. After the first half of the final the game looked like it was a step too far for Cameroon, but at that point the Indomitable Lions’ breakthrough still looked likeliest to come from the sparkling Christian Bassogog. He has been the revelation of the tournament.

For many reasons, this was not a tournament where strikers shone, and it’s apt that Junior Kabananga, most comfortable on the wing, has finished as the top scorer with three goals. His height and knack for goals – and big occasions – has always made him an invaluable option for Florent Ibenge, either as a central striker or on the left flank. And he was to reaffirm his coach’s belief in him at this tournament, starting with punishing Morocco’s Munir in the first game to claim a fortuitous 1-0 win which helped his team finish as group winners.