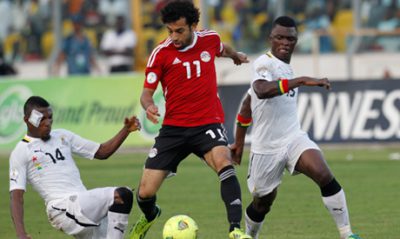 Going into Sunday’s game in Alexandria, Ghana are the team under pressure. With Uganda winning at home to Congo in Kampala, a loss for the Black Stars would make qualification chances look that little bit bleaker, even with four fixtures to look forward to, as they would lag behind both Egypt and Uganda in Group E.

Ghana have recent history on their side, though. Their 7-3 victory on aggregate in 2013 still looms large over this fixture like a dark cloud – members of both local medias bring up the events of that fateful October afternoon in press conferences before the game, three years on.

World Cup qualifying series haven’t been kind to Egypt- they haven’t qualified since 1990, despite being considered African giants. They have tripped at the final hurdle two times in a row against Algeria and Ghana, respectively. Failure to take points of Ghana may have them ruminating over their misfortune again when qualifying concludes next year.

Still, the Pharaohs have shown resilience at the start of the current campaign, coming from behind to beat Congo 2-1 in Brazzaville. In-form Mohamed Salah poses the biggest threat to a structure-less Ghana side that leave themselves wide open to counter attacks. Most sides the Black Stars come up against don’t have the quality to capitalise, but Hector Cuper will surely have recognised this opportunity for the Roma winger.

Cuper told ONSport of his satisfaction with the current players in camp.

“Everyone is in a good physical state and we only miss Mahmoud Kahraba and Ahmed Hassan Koka. It is great to have such a group of great players under your management,” Cuper said.

“We understand the importance of the game to the Egyptians, the players are focused on getting the victory and winning the three points,” the former Valencia coach added.

After an unexpected draw to Uganda in Tamale, where the team dominated and missed many chances, Ghana face a completely different test against Egypt on Sunday. Ghana, generally, have flattered to deceive over the past year, blowing past teams due to sheer quality, despite not looking like an organised unit after two years under Avram Grant. The Pharaohs are a compact counter-attacking team and will have the composure to punish the Black Stars on the break like Uganda couldn’t in Tamale. The match against an organised but unremarkable Egyptian side will serve as a decent litmus test.

Asamoah Gyan’s absence is a big blow. The veteran’s clever hold-up play allows  the team to bypass the midfield’s disjointed attempts at building through the middle and get the ball forward. With very few questions about how the team will actually set up coming from the press, most are none the wiser as to what Grant will do on Sunday. Will he use Jordan Ayew up-top as a single striker or partner him with Abdul Majeed Waris?

Grant himself is wary of the threat Salah poses. “I think all players are dangerous. I have heard about what Salah is doing. He is the best player in the Italian league,” he told Al Nahar Reyada Channel.

“Salah is a player that can create something dangerous. He is very quick.” If the Black Stars are to get anything from this game they will have to nullify the red-hot Salah.