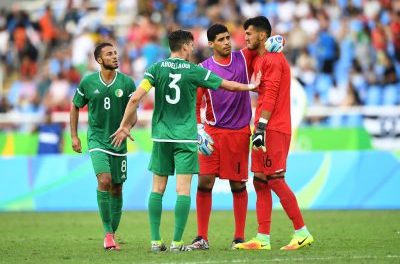 South Africa jetted to Rio as the most unfancied African side, and it was easy to understand why. Having been fortunate to qualify in the first place, as coach Owen Da Gama frankly admitted in the aftermath of their backs-to-the-wall play-off triumph on penalties against Senegal, expectations were also low from the South Africa camp.

For all the pessimism,  they emerge from the first round of matches as the most impressive African team, offering the most optimsm. Expected to succumb to a defeat to hosts Brazil, Bafana Bafana delivered a courageous performance. They started off well, quietening the crowd early, stayed defensively compact and looked dangerous on the counter through the brain of captain Keagan Dolly.

The last few weeks’ hot debate has been the merits, if there are any, of the inclusion of the duo of Itumeleng Khune and Eric Mathoho. By full time the overage pair had both justified their places and more, insofar as the mute the debate for once and for all. Khune’s exuberance behind the sticks and command of his area sparked another debate: was he was currently Africa’s finest goalkeeper? Mathoho, as expected, added raw physicality into the heart of a defence which had struggled to cope with powerhouse centre-forwards during their AFCON U-23 campaign.

Facing Brazil in their curtain-raising game posed the danger of their confidence being shot early on, in the event of a crushing defeat. This impressive draw, with the addition of having to play the final third of the game down to 10 men, gives Da Gama’s team great momentum to progress from the group with Denmark and Iran awaiting them. Wasteful finishing is a long-term issue, though, and it could prove to be their undoing.

In the hours before the start of Olympics an injury to first choice goalkeeper Abdelkader Salhi saw him ruled out of the tournament. His pain was Farid Chaal’s gain, but surely those that didn’t rate the MC Alger goalkeeper highly couldn’t quite have envisaged him to have such an atrocious game. In terms of goalkeeping, it was as bad as it could get for the 22-year-old.

The errors, especially for Honduras’ third goal when he dropped the ball onto the path of Lozano, were the type which suck the energy out of the whole team. With Algeria enjoying a dominant second half and looking the likelier side to score the equaliser, it was the last thing they needed.

The errors could haunt the Chaal for years to come or, depending on the eventuality of Algeria’s tournament, be forgotten. It is to his benefit that Olympic football doesn’t quite have the global appeal to live long in the memory, but it would be a surprise to see him play again in action again in this tournament. Algeria’s backline may not have covered themselves in glory in the first half, but they would not be filled with confidence with Chaal as the last line of defence.

Nigeria have issues to address

Another major tournament, another case of an African team’s maladministration making the headlines. Nigeria have issues to address – on and off the pitch. Jet lag couldn’t stop the Dream Team recording a 5-4 win over Japan, with some going as far as using it as an excuse for the poor defending and praising the team for having able to pull through with it. Perhaps they could have defended even better without it, eh?

Whatever the case, the porousness of their defence is something Nigeria need to address if they are to repeat the exploits of the 1996 team. A solitary clean sheet on their way to lifting the U-23 AFCON last year and the simple fact that they are a Samson Siasia team means this is wishful thinking.

The attacking midfield role for John Obi Mikel is also an issue that requires a re-think, not to mention the wayward passing that was an issue throughout. The Chelsea midfielder is showing diminishing returns in his creativity. While years ago he was able to control games, and may still be able to from deep, he doesn’t have the mobility or cunningness in the final third to show his best qualities.

Scoring 5 goals and recording a win given the context is impressive, but you can’t help but feel that Nigeria’s goals largely – a shot saved onto Umar’s path, misjudgement of a ball and two regains – came as a result of unforced errors rather than moments of genuine quality.

Player of the Round

Eric Mathoho (South Africa) – Monstrous performance at the back, and one of the main reasons why South Africa looked so secure. Added the brawn they have been looking for.