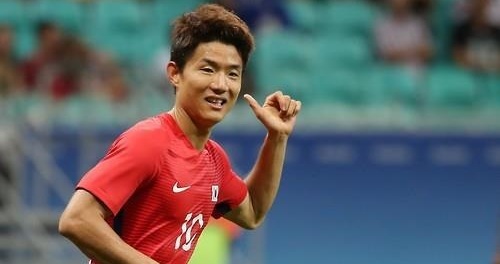 It was a mixed bag for Asia’s representatives on Olympic opening night, recording a win, loss and draw over their three matches. It was a late one for our own Tom Danieck, as he manned our coverage on social media into the early hours, but it wasn’t a disappointing one by any means. Alongside Tom, Martin Lowe looks back on the key takeaways from the opening round of Olympic football.

After watching the Denmark game, could you ever still imagine Iraq manager Abdul-Ghani Shahad fielding Ali Adnan as a centre back; an alternative seriously discussed prior to the kick-off? I bet you can’t, because it’s indeed pretty hard to see where all the Iraqi threat would come from if it wasn’t for the Udinese man.

Iraq lined-up in a peculiar, unbalanced formation which largely resembled a 3-6-1; providing Ali Adnan with plenty of freedom, and Dhurgham Ismail with the proverbial ball and chain, so to speak.

Having Ali Adnan as a left wing-back simply resulted in him totally owning the touchline, but at the same time restricting others to the roles of scarcely involved admirers, which – especially considering Dhurgham’s usual attacking appetite – was nothing else than a pity and a waste of talent.

Obviously, Ali Adnan at his very best can be a devastating force of nature; a truly imposing figure, adept in one-on-one situations and prolific at creating chances. That tag, though, Ali Adnan lived up to only partially against Denmark. Sure, he did produce one low cross which should’ve been turned into a goal and he did have some other good looks, but overall, he was giving a clear priority to flashy step-overs over ruthless straightforwardness – something Dhurgham would more or less guarantee instead.

It wasn’t just Dhurgham who was being suffocated, though. The Ali Adnan show rather marked something of a far-reaching power shift in Iraqi play, as he sort of drained everybody else of significant influence.

Ali Husni, for example, lynchpin of the bronze U-23 side in Qatar, had touched the ball only a few times as a left midfielder and had me genuinely wondering whether he was still on the pitch just before the half-time arrived; even though his on-the-ball movement is so unpredictable. On the other side, for a change, Humam Tariq felt the unnecessary need to do something too special and too rushed with just about every ball he received given how relatively little of it he saw.

This overt reliance on Ali Adnan doesn’t have to be an everlasting issue, though, as the last few minutes showed us. With Mohannad Abdulraheem as a power forward upfront and Mahdi Kamil as the most vertical central midfielder of all Iraqi options on the pitch, the Asians suddenly possessed a much greater variety of weapons. Kamil himself, for instance, drew two yellow cards from opponents, giving Adnan two opportunities to produce disappointing free-kick efforts from promising positions.

Start both Kamil and Abdulraheem next time around, and the goals will come. Trust me. TD

It’s very hard to grumble when you’ve just waltzed your way to an 8-0 drumming, but South Korea will wake up this morning with a couple of key questions they need to answer if they expect to make it through to the knockout stages in Brazil.

Without coming across greedy, the margin of victory could’ve been much higher. A missed penalty in the first half, was followed up by numerous wonder saves by Fijian man-mountain Simione Tamanisau and often sloppy final third play from the East Asians. The penny only really dropped after the hour mark, as Korea quadrupled their one goal lead within 2 minutes.

The team’s set up drew the initial talking points. Overage stars Son Hueng-Min and Suk Hyun-Jun were sensibly rested in knowledge this was likely to be an easy victory. However, the deployment of their third wildcard pick Jang Hyn-Soo in an anchoring defensive midfield role proved more than a little perplexing.

A sound defensive selection, given Jang’s immense experience and capabilities shielding his own goal. However, in a match where Korea unsurprisingly dominated almost three quarters of the possession and faced little attacking forays from the Fijians, their initial attacking build up was off key from the start, with Jang having to dictate much of their early moves.

Another reason for the frustrating start can be explained by first match nerves. Irrespective of the opposition, the pressure to start quickly was always going to weigh heavily on Korean shoulders. Such pressure once relieved mid-way through the second half, opened the flood gates leaving everyone in Taegurk Warrior red with a big grin on their face come the final whistle.

In an attacking sense, individually Korea’s attackers almost exclusively stood up to the task. Ryu Seung-Woo was excellent, both in creation (involved in all but two of the goals) and in front of goal (netting a hat-trick), Kwon Chang-Hoon while quieter than his attacking colleague finished expertly twice, while late cameos for Son and Suk saw them register debut Olympic goals.

Question marks if you’re being picky could fall at the door of Hwang Hee-Chan, who was unlucky on more than one occasion before being withdrawn for Suk and Moon Chang-Jin who was similarly thwarted by Tamanisau, and of course missed the earlier penalty, but overall the job was accomplished sufficiently.

Other bright spots came in the form of the rampaging full backs, right back Lee Seul-Chan particularly delivered a couple of delightful assists, but admittedly neither needed to be defensively aware in this one sided encounter.

Little can be truly derived from this contest, given Korea did what they needed to in putting their opposition to the sword comfortably. The upcoming tasks against Germany and Mexico will be far more testing affairs. ML

The late game in sweltering Manaus was clearly not one for the defensive purists, but anyone that either stayed up late or got up early to watch the Japan-Nigeria encounter, at least were rewarded with 9 goals, if not the best of rear-guard displays.

A game that seesawed frantically to begin with well and truly got away from Japan, who will want to erase this performance from their minds as soon as they can, clinging on to the fact that a narrow 5-4 defeat was a lucky deficit given the ineptitude of their back-line performance.

Each of Nigeria’s 5 goals, all scored before the hour mark were preventable, without one single man in the Samurai Blue defence avoiding a howler or two. The Super Eagles’ first; a tap in from the uncomfortable looking, but devastatingly effective Sadiq Umar should’ve been cut off at source. Building up on Japan’s left side with Hiroki Fujiharu putting in a limp attempt to break up the attacking play, before the back-line fractured in a failed offside trap.

Nigeria’s second, saw the opposite full back Sei Muroya miss time his jump, while for the third, a static defence looked on before the highly rated Naomichi Ueda comically headed to the opposition within the area. The fourth, came via a soft penalty giveaway which was of their own making, Muroya this time mucking around with Tsukasa Shiotani before tripping Umar. And onto the 5th, with keeper Masatoshi Kushibiki making sure he wasn’t left out in the catastrophe, flying out feet first for a cross only to set up Oghenekaro Etebo for his fourth. An all-round defensive disaster.

This young Japanese team who have a habit of making a late comeback, left it too late in this time, rattling in a double through substitute pairing Asano and Suzuki just as the game went into stoppage time. The score line flattered Japan, Nigeria will feel more than a tad disappointed that they let their guard down after being comfortably 5-2 up mid-way through the second half.

So where to improve ahead of Colombia on Sunday? First of all, I’d be surprised if Coach Makoto Teguramori doesn’t call on Kosuke Nakamura to take goal after Kushibiki looked a nervous wreck at times. Defensively, on paper these players should still have it in them, and without many other options to choose from, it has to be hoped that this was a mere blip that can be improved on immediately.

Japan’s pressing usually gains rave reviews, but that was the area in which they lacked urgency the most. Nigeria immediately wanted to win possession early, high up in the opposition half, while Japan too often took the cautious option, a reason why they subsequently never sustained any sort of momentum. Skipper and usual talisman Wataru Endo, like others had a patchy off day. His passing was wayward, his pressure was slow, he lived up to the team’s all-round performance.

A positive to take away from this is the impact in attack, where Japan can point to the fact that four of their strikers are off the mark at this tournament, giving Teguramori a nice selection headache ahead of match two. It’ll be a welcome distraction from him pulling his hair out over the defending that’s for sure. ML

Player of the Round

Ryu Seung-Woo (South Korea) – Korea’s hat-trick hero, was a menace both directly in front of goal and creating for others, including winning two penalties against Fiji.