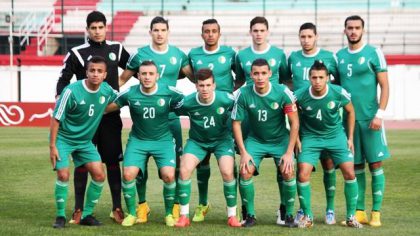 Last week, former FLN footballer and militant, Mohamed Maouche, told me that too many people celebrate Algeria’s 1982 World Cup side without paying attention to its harbinger: the Olympic football team of 1980.

Thirty-six years ago, Mahieddine Khalef took a star-studded line-up to Algeria’s first global tournament. Rabah Madjer, Lakhdar Belloumi, and Salah Assad – who would later compose the spinal column of Algeria’s golden generation – finished second in their group, upsetting Spain before crashing out in the quarterfinals to a dominant Yugoslavian side.

In Algeria, the Olympic games have always been heralded as a unique chance to raise the green, white, and red on the world stage. Rio 2016 is no exception, though expectations have been tempered, as the Federation of Algerian Football has not found success in convincing clubs to let stars like Riyad Mahrez or Islam Slimani participate.

The mini-Fennecs qualified for the Olympic Games by finishing runners-up in the 2015 Africa U23 Cup of Nations. Pierre-Andre Schurmann’s boys were drawn in a group of death alongside eventual champions Nigeria, and powerhouses Mali and Egypt.

Algeria managed two draws and a two-nil thumping of Mali, thanks to the magnificent play of Zinedine Ferhat. In the semi-finals, Ferhat and co. convincingly put two past a star-studded South African line-up. Having already achieved their objective, the team lost to Nigeria in the final with nothing on the line.

Abdelkader Salhi: Salhi may be the only player in the squad that is more looking forward to finishing the tournament than playing it. The ASO Chlef keeper has amassed the most clean-sheets of any goalie in Algeria these past two seasons. The only reason Salhi has not yet been called up to the national team is the coaching staff believed that doing so may disrupt team chemistry. With a good tournament under his belt, Salhi will look forward to challenging Rais M’Bolhi for a place between the posts.

Haris Belkebla: Belkebla knows that his performances in Brazil will be closely scrutinized. The 22 year-old can thank the French-Algerian press for making a convincing enough case on his behalf for his inclusion in the side. To be fair, the midfield dynamo has enjoyed success in Ligue 2, where he plays with Tours. A tidy and energetic box-to-box midfielder, Belkebla will fulfil the all-important role of linking possession between Algeria’s defence and attack.

Baghdad Bounedjah: By far Algeria’s biggest name at the Olympics. Bounedjah is not only an established star in his country, he’s also renowned on the continent after helping Tunisian side ES Sahel to Confederation Cup in 2015. For many, Bounedjah is the most talented Algerian striker. He can do more with the ball at his feet than Islam Slimani or Hillal Soudani. Unfortunately, the 24 year-old opted to sign for money at Al-Sadd in Qatar, but an impressive showing in Rio might just land him the European move so many of us crave.

Under Swiss caretaker Pierre-Andre Schurmann, Algeria play a 4-3-3. The formation quickly collapses into a 4-5-1 during defensive sequences of play, stifling space before launching into quick counter-attacks. The tactic worked to perfection during the 2015 Africa U23 Cup of Nations, as Algeria were content to sit back and surprise their opponents on the break.

It will be difficult to know if Algeria will continue their counter-attacking play as Schurmann’s entire midfield and attack will have been reconfigured. Star winger Zinedine Ferhat, who recently signed with Bob Bradley’s Le Havre, has been left at home for skipping training camp without notifying the Federation of Algerian Football.

Two-thirds of Algeria’s young and talented midfield have also been ruled out with knee ligament injuries. Oussama Chita and Ahmed Gagaa are to stay in Algeria having been replaced by Belkebla and Sporting Gijon’s Rachid Ait Athmane.

Notwithstanding, expect Algeria to play disciplined and defensive football. It is also fair to assume that Les Fennecs will rely on the individual qualities of creative wingers like Zakaria Haddouche, and Abdelkader Meziane. Their inventiveness and ability to develop a working relationship with Bounedjah will be key to any success Algeria have in Brazil.