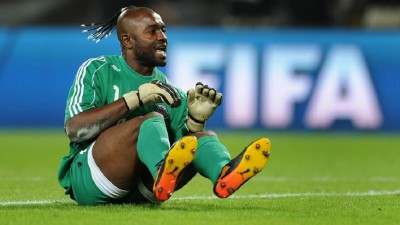 Robert Kidiaba went into AFCON 2015 as one of DR Congo’s potential weak links after the energy-sapping errors he had committed in the months in the lead up to the tournament. A few weeks later, he would exit the tournament as one of their impressive players as they battled their way to a third place finish.

A somewhat erratic keeper who has become well known to the wider world for his famous celebration when his respective teams score goals, rather than his skills as a goalkeeper, Kidiaba used his swansong international tournament to outline his credentials between the goalposts. A commanding goalkeeper with the bravado to intimidate opponents, as he showed in the third-place play-off penalty shoot-out against Equatorial Guinea, Kidiaba’s main strength is his ability to make crucial saves at crucial moments.

After retiring from international football on a high, Kidiaba used his international form as the gusto to a return to form with TP Mazembe after a painful end to 2014. Facing increased competition following the signing of Sylvain Gbohouo, Ivory Coast’s first choice goalkeeper, after the tournament, the 40-year-old has shown no signs that he will be relinquishing his jersey any time soon.

Whereas he was a liability in the latter stages of 2014, in 2015 he won TP Mazembe ties with countless crucial saves. His excellence and memorability at both club and international level sees him make the top 10 and finish on this list as the highest placed goalkeeper.

Highlight of the Year: Banishing the pain of last year

His misjudgement of the the flight of two routine crosses in the second leg of the Champions League semi-final against ES Setif was Kidiaba’s lowest point in 2014. It was a match which TP Mazembe were firmly on top and it was difficult to point fingers at anyone other than Kidiaba, who was inconsolable even days after the game. He has done as well as he could have hoped in 2015 to banish the pain of that defeat.