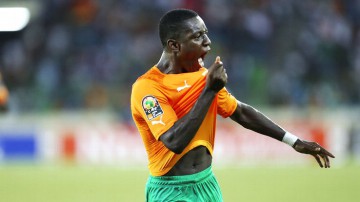 Max Gradel has always been a man of moments rather than stellar, game-by-game brilliance. The prototypical impact substitute, being named from the start usually resulted in subdued performances and, subsequently, redeployment on the bench. With an eerie knack of right-place-right-time runs in the box, he has often been the scorer of vital goals or the provider of assists from the bench for the Elephants in the last three years. The year 2015 will be remembered as the year he propelled from a side man to a main man. 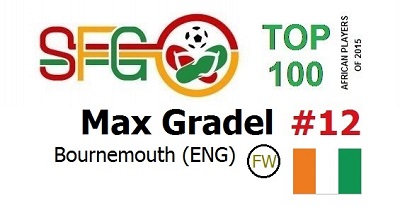 It is not hyperbolic to state that Gradel was Ivory Coast’s outstanding player at the tournament; a case can certainly be made for him. His key moments came in the Elephants’ toughest run of fixtures when the team looked uncomfortable with their brand new 3-5-2 system, and all of the attacking players were under-performing – Wilfried Bony looked isolated and unsuited to the 3-5-2 system; Yaya Toure oozed a Sunday morning laxity; and Gervinho, though lively in the opening game, was red carded and suspended until the quarter final after his moment of madness.

Up stepped Gradel. There was the late equaliser against Mali, the thunderbolt to beat Cameroon goalkeeper Fabrice Ondoa from long range, and the deliciously inviting cross begging for the connection of Bony’s head versus Algeria.

Due to the lack of midfield numbers in the system Renard imposed, Gradel, playing off Bony, had to do his fair share of hard running and defensive work. He was defensively excellent in the quarter final clash versus Algeria, making a game-high 6 tackles high up the pitch to curtail the attacking threat of Faouzi Ghoulam from Algeria’s left side.

There is a no-frills style to Gradel’s style of wing-play, which is perhaps a nod to his formative football years being spent in England, and is a good starting point to explain why he has been so overlooked for Ivory Coast over the years. On an off-day, where nothing comes off, he can appear to be the most average winger in the world – as he did against Colombia at the World Cup, where his first touch was off and his ability to beat a man deserted him. The modesty of his footballing CV only compounds the myth that he is average.

And on the days when he is in good form there is nothing extraordinary bar the completions of the basic necessities of wing-play to a high degree. The runs into the box are well-timed, the finishes are routine, he gets to the byline, and there is an intensity ande energy to his game which keeps the opposing full-back occupied for 90 minutes, but there are no elasticos or stepovers to warm the crowd.  He notched 17 goals in 31 games last season for St Etienne but few seem to have noticed.

An early-season injury has denied us the chance to see if he could replicate his form in the English Premier League for Bournemouth, but there’s no denying that Gradel was Grade A in 2015.

He has gone from an impact player to one of Ivory Coast’s key players. In terms of output, he always has been key over the last few years, but his form in 2015 has seen him cement his place in the starting XI.