Chelsea, Paris Saint-Germain, Arsenal and Real Madrid are just four of the megaclubs that tabloids linked to Faouzi Ghoulam over the summer. The interest has been generated by a series of consistent performances over the years.

Ghoulam is Algeria’s iron man, having played more than fifty matches across all competitions in three consecutive seasons. His superhuman endurance is a result of a high work ethic off the pitch. Ghoulam employs a personal trainer and nutritionist with whom he works with every off-season to ensure he’s fighting fit come pre-season. 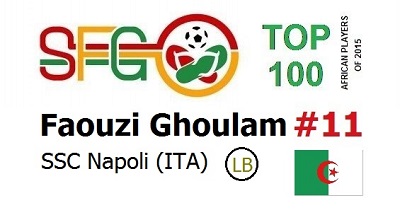 The 25 year-old fullback, now entering the prime of his career, is without exaggeration one of the best crossers of the ball in world football. He is one of a handful of defenders in European football that can regularly place a precise one-timed cross in the indefensible space between defensive lines and goalkeepers.

The rest of Ghoulam’s game is above average, but not exceptional. The Algerian isn’t the fastest fullback, nor is he the best one-on-one defender, but his erudite approach to the game compensates.

If any criticism is to be levied at Ghoulam, it could be that he seems to have hit a plateau. Very little separates the Faouzi Ghoulam of two years ago to the Faouzi Ghoulam of today. The only slight improvement in his game is an uptake in goal-scoring form, but the rest of his arsenal has unfortunately seemed to stagnate.

With the Algerian national team, Ghoulam enjoyed his best calendar year to date, scoring four spectacular goals. At the Africa Cup of Nations, his dangerous foray against South Africa gave Les Fennecs the lifeline necessary to climb back into the match. Ghoulam also managed a magnificent brace against Tanzania in October, which included a knuckleball free-kick that flew in from forty yards.

It is no coincidence that under Christian Gourcuff the majority of Algeria’s attacks originate from the left flank. The advantageous imbalance stems from the chemistry Ghoulam shares with Leicester’s Riyad Mahrez. The two have worked tirelessly on their overlapping runs and have rendered their side of the pitch one of the most feared in African football.

Now that he’s established himself as one of the top fullbacks in European football, outstanding questions won’t be of Ghoulam’s quality, but, rather if he will be able to cement a place in one of the elite sides he was linked with last summer. Napoli are atop the Serie A, but with only a year and a half left on his contract, lucrative contracts could yet tempt one of their most consistent performers.

Highlight of the Year: Two goals and an assists against Tanzania

Faouzi Ghoulam was untenable in the return leg of a tense qualifier against the Taifa Stars. Ghoulam scored a free-kick, penalty-kick, and cut a cross back for Riyad Mahrez on the way to a 7-0 rout.