Cast your mind back to April, where all the buzz in Asia surrounded a certain Japanese wonderkid’s potential transfer to the English champions no less. Well some 9 months later we may have been left a tad disappointed that that never materialised, however the impact of Yoshinori Muto on another area of Europe has been far from a let-down.

After excelling with his home town club Tokyo in the first part of the year, he wisely considered his suitors before picking the most holistic package for his development in Bundesliga side Mainz, a decision he hasn’t regretted one bit since. Now as the transfer circus wheels back into town, our Asian Rising Star that we highlighted in our series earlier in the year is once again being muted for a move to England. 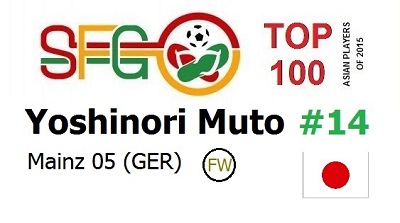 It’s been a year that the player himself will have trouble forgetting. He started 2015 in as much form as he ended 2014 (where he finished the season with 13 goals in 17 for FC Tokyo). He promised much in his breakthrough international tournament with Japan in the Asian Cup, which ultimately saw him used merely as an impact sub, but an effective one, before returning to J-League action in early April.

Considering that this was only his second year as a pro, the improvement on Muto’s game was instantly tangible, hence the considerable interest from Chelsea that came later in the month. He scored five in his first 7 matches, including an inspirational brace against Vegalta Sendai in May which saw FC Tokyo climb to the top of the table. By the time the summer break came round, Tokyo were clear title contenders despite their reliance on their fleet footed talisman, something that would sadly fizzle out for the remainder of the year on the back of Muto’s exit.

So to his move to Germany, where Mainz caught the favour, not necessarily because of the glamour, given they are quite firmly a mid-table outfit offering little European football prospects, but because of their sustained interest and their recent history of developing East Asian talent; fellow Japanese striker Shinji Okazaki and South Korean defender Park Joo-Ho had both moved up in their careers in the previous months thanks partly to the guidance from the club.

It was those couple of transfer dealings that had the club buzzing, out went one of their most potent attacking players in Okazaki, and in came the highly rated Muto in his place. While Muto instantly took up the number 9 shirt, his game previously is hardly that of a stereotypical centre forward. Throughout his Tokyo and fledgling Japanese career he had broadly been used as either as a wide forward or an attacking midfielder, for Mainz it was going to be different, instantly being thrown into a traditional 442 formation as one of the central forwards.

Muto didn’t take long to settle in, taking only three matches to score his first two goals for the club in a 3-0 home win over Hannover. The other scorer that day, striking partner Yunus Malli, has been Muto’s wing man in both players ascension. The pair have gone into the New Year with 15 goals between them out of Mainz’s paltry 23 in the league. He may not be replicating Okazaki’s style, but Muto is well and truly living up to his Japanese colleague’s goal scoring influence.

Style is something that has over the last two years separated Muto from his peers. He’s hardly the tallest, at 5’10”, however he’s up for a physical encounter, he’s direct when facing goal, looking for a quick and go rather than a patient build up, but most importantly he’s flexible. Okazaki for years in my opinion was played out of position on the right wing to utilise his work rate, when he should be used as a centre forward for his penalty box nous. Muto on the other hand can excel in both positions for slightly different reasons.

He doesn’t fit the old East Asian “110% effort” stereotype, but his pace and quick thinking is devastating when cutting in from either flank, though Muto has tended to prefer the left. As a centre forward, you might lose those devastating runs straight at the defence, but you gain a livewire that thrives on the loose ball, which has delivered much of his output for Mainz this year.

While 2015 will be seen as his breakthrough year on the domestic front, sadly for Muto he’s not as yet tied down a starting spot for the national team. He’s far from excluded, however, playing some part in every Halilhodzic squad since his appointment, but for the time being at least he’s finding competition fierce with Haraguchi and Usami in particular being rotated with the capital born attacker in the final piece of the Samurai Blue attacking jigsaw. As we start the new year, that’ll be his primary target ahead of World Cup qualification Round 3, that and possibly a certain Red Devils who’ve started sniffing around his magical feet.

Highlight of the Year: First hat-trick for his new club

While his performances were gaining rave reviews in the Bundesliga, 10 games in and Muto had only scored 3 goals, which he’d be slightly disappointed with. However in one game he doubled his tally and truly stamped his mark on the league. In a 3-3 draw with Augsburg, in which he clinched a last minute equaliser; it was a clear demonstration of the new Muto, which the J-League may have missed.

His penalty box movement, the hunger and the instinctive nature of all three of his efforts in isolation aren’t what we’d grown accustomed from Muto in Japan but they show crucially his maturity which looks to grow ever more into the new year.