What’s more striking than Islam Slimani’s 26-goal tally this calendar year is how effectively he has managed to turn doubters into believers every other year of his playing career. Slimani is a once-in-a-generation late bloomer, making his debut with the Algerian national team at the age of 24. 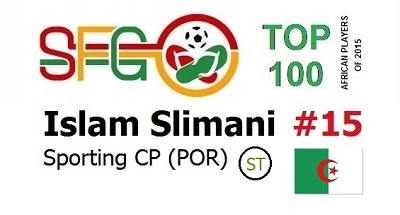 The Ain Benian native received his share of criticism in the Algerian press. Part of the distaste stems from an un-Algerian playing style that never drew the eye, or made viewers want to tune in. Newspapers called him ‘square-foot’, making the sometimes-fair observation that he lacks in technical ability. But this calendar year, Slimani has proven to be indispensable, and Algeria have often looked hapless in his absence.

Standing at nearly two metres tall, Slimani has always been an aerial colossus, scoring headers with his bounding vertical leap and timely anticipation. But since Jorge Jesus’ arrival at Sporting in August, the former CR Belouizdad man has taken on another dimension with the ball at his feet.

Take his goal against CSKA Moscow in Champions League qualifiers, or the first goal of the season he scored against Academica. Slimani himself has attested to the fact that he feels the Portuguese caretaker believes in his abilities.

An example of Jesus’ trust in Slimani came at the end of December. After Slimani won a penalty against Braga, he, Adrien Silva, and Teo Gutierrez all clamoured for an opportunity to put in the go-ahead goal. Adrien Silva, Sporting’s captain, grabbed the ball, but Slimani shot his coach a pleading look and the former Benfica coach was insistent, bellowing at his skipper to let his spearhead take the spot-kick.

Statistically speaking, Slimani has had himself a phenomenal half-season. Despite missing a month and a half at the Africa Cup of Nations, and dealing with a couple of injury stints, the Algerian striker has still managed more than 20 goals and 10 assists. The media have linked the Algerian striker to various Premier League sides since his two goals in Brazil. Leicester City, West Ham United, Crystal Palace, and Tottenham Hotspur have all made official inquiries about Slimani. There seems like no better time for the 27-year-old to make the glamorous move abroad and establish himself as a household name than now.

Highlight of the Year: Statistical output

As of now, there is no hotter player in world football than Islam Slimani. In 2016, the Algerian striker has 8 goals in 5 matches, more than any other player in any top division in the world. If he continues at this rate, Slimani will force his way into the African elite as one of the best strikers in world football.