No player in the history of the Iraq national side has managed to make his position his own after only 90 minutes of football, but that was just what Yaser Kasim, the Baghdad-born West Londoner, did when he bossed the midfield in the final Asian Cup qualifying victory over China which assured Iraq’s place at the finals Down Under.

At the 2015 Asian Cup, Yaser stood out as one of the Lions of Mesopotamia’s key men as Radhi Shanaishel’s men reached the semi-finals and it was not lost on observers that the defeat to South Korea in Sydney came in the absence of the suspended Iraqi number 5… 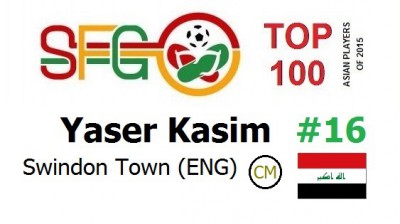 Yaser had great hopes in working under the man they respectfully called Al-Sayed Radhi, however after the Australian highs at the turn of 2015 came the lows in the summer – at Wembley losing the League One play-off final 4-0 to Preston, and then in Yokohama falling against Japan by the same scoreline in a friendly.

At the final whistle in Yokohama the disgruntled midfielder wasn’t happy and had to get a few things off his chest in a frank interview with Tokyo-based newspaper Kyodo, not only revealing that he was looking to leave his club Swindon Town in need of “another challenge”, but also lamenting the state of the Iraqi team. “In our condition right now, we’re not going to get to where we want,” he said. “We can forget about the World Cup – and I’m not blaming the players.”

Things did not get better for the ‘Iraqi Pirlo’ after he failed to earn a move away from the County Ground, where his own chairman believes he wouldn’t look out of place turning out for Real or Barça at Camp Nou or Bernabéu. However, a move in this winter transfer window may be on the cards, with interest from an unnamed Premier League club being reported.

In early September, on the eve of a crucial World Cup qualifier in Bangkok, Yaser refused to play telling the coaching staff that he was not in the “right state of mind” to start against Thailand. Only a few days later, in an open letter to the Iraqi fans, he explained his reasons for his sudden decision, mentioning that the Iraqi team was controlled by a few individuals serving themselves, who had “built a system in which intimidation and fear was used to control the team,” which he could not accept.

After behind the scenes consultations between the player, Sports Minister, and the alleged culprit in the whole affair, team captain Younis Mahmoud, everything returned to normal and Yaser is now back in the team.

Highlight of the Year: His magical solo goal against Jordan at the Asian Cup

When the draw for the Asian Cup groups was made, the Iraqis knew a win over neighbouring rivals Jordan would see them through, with Japan favourites to top the group. Precisely that match, though, looked to be headed into a stalemate until Yaser Kasim, a standout in the match, collected the ball in midfield, played a one-two with a teammate and then went onto beat three defenders as he worked his way through the defence on the right side of the penalty area, in order to find the back of the net with his left-footed effort.

He did so thanks to a notable deflection, which Kasim cheekily touched upon later on in an interview: “I was going for the far post but luckily it got a nice little deflection.” According to The Guardian, for a change, Kasim scored the winner with “a touch of Messi-style magic” and “a little slice of luck”. The goal was the start of Iraq’s magical run at the Asian Cup, where they finished fourth.