When a 19 year old Alireza Jahanbakhsh signed for Eredivisie side NEC Nijmegen in 2013, it was always going to be a start of a great journey for the skilful winger. There have been many bright Iranian young players down the years, but rarely any of them boasted the hardworking character or the professional attitude Jahanbakhsh himself has in abundance.

That makes him somewhat similar to Iran’s legendary right-sided player, Mehdi Mahdavikia, a loveable and determined character, someone who Jahanbakhsh has always praised after Mahdavikia advised him to take a chance and move to Holland. 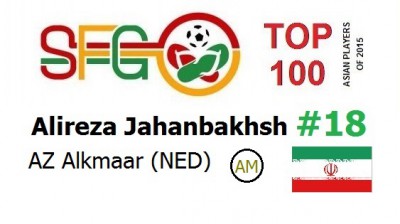 Jahanbakhsh’s first season at NEC came to a disappointing end as they were relegated to the Eerste Divisie, despite this following some of his great performances, there was some considerable interest from other Dutch clubs. However, Alireza remained loyal to NEC and so 2014/15 was the season when he had to really prove himself, in a league which many believed was below his level. But he showed his worth as he took the league by storm, 12 goals and 18 assists in 28 league appearances helped his team gain promotion back to Eredivisie at the first opportunity.

His stellar performances and statistics earned him the Golden Ball award, as he was named the Player of the Season. His stock was rising even higher in Holland as ever bigger teams started to take note of the Iranian winger.

Rumours of Feyenoord and PSV interest gained a lot of attention in Iran, but it was English second division outfit Brighton & Hove Albion who first approached Jahanbakhsh with a serious offer. However, Alireza’s mentor and agent, Amir Hashemi, who is a former Iran international and FIFA Instructor in Holland, rejected the big money offer, citing his player’s interest to play for a team at a higher level. Then came the move to AZ Alkmaar in Eredivisie. AZ had the Europa League to offer as well as a higher playing level which attracted Jahanbakhsh.

Having been highlighted by BeNeFoot as Alkmaar’s player to watch, Alireza’s debut season for AZ has been somewhat disappointing, with injuries holding him back from playing regularly at his new club. He made his league debut in late September in a 3:1 victory over De Graafschap. He only made five league appearances in the AZ Alkmaar starting line-up in 2015, but he has spent the last few weeks getting back to full fitness as he hopes to stamp his mark on his new club in the second half of the season.

For the Iranian national team, too, things haven’t been so smooth. Jahanbakhsh has been a bit part player for Carlos Queiroz’s Iran in the last 18 months, mostly making his appearances coming off the bench. He only started one game at the 2015 Asian Cup, in their final group game against the UAE, as he’s been behind Ashkan Dejagah in the pecking order.

Either way, his versatility in playing each side of an attacking three have made critics question Queiroz’s inability to give him a regular spot in his team. He has 17 international caps to his name, but he and Sardar Azmoun are quite clearly the leaders of this upcoming crop of footballers coming through the ranks. With his name attracting more attention in Holland and Europe, it’s difficult to see him sit on the bench for Team Melli much longer as 2016 gets underway.

Highlight of the season: Being officially recognized in Netherlands

2015 was a good year for Jahanbakhsh, but being recognised as the best player in the second tier of Dutch football is something that will probably standout for him personally too. It’s not often that you see a Middle Eastern player being given such an award in a European league, so it was satisfying to see him waving the Iranian flag in Holland.

The previous season, Alireza was voted runner up for the Best Young Player in Eredivisie, only behind Memphis Depay, so to take that on and prove himself in Eerste Divisie was something to behold. NEC Nijmegen fans were very appreciative for his phenomenal season, and they’ll probably point to the games against Jong Twente, FC Emmen and Helmond Sport as Jahanbakhsh’s best games during that season.