The 24-year-old’s year started with an anonymous AFCON where, with much expected from him, he failed to deliver. In fact, his performances in the opening two games were so poor that he found himself dropped to the bench for the crunch final group game against Ivory Coast, where only a would have guaranteed the Indomitable Lions’ passage to the quarter finals. 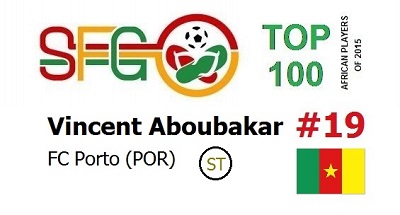 Having marched into the tournament as one of the favourites, obliterating Ivory Coast 4-1 in qualification with Aboubakar at his irresistible best, Cameroon were unrecognisable this time around, timidly exiting the tournament. It would be easy to blame Aboubakar, especially with his obligation to answer as one of the vice-captains, but it was very much collective failure by Cameroon, and the team was not helped by the bizarre, illogical team selections and tactics from coach Volker Finke.

What did arise from the tournament, however, was Aboubakar’s need to play with self-belief. It may seem like a convenient, off-the-shelf observation to make – after all, most players need confidence in order to play to their optimum level – but the Yaounde native has shown that he needs it more than most. It was an observation the Algeria coach Christian Gourcouff quickly realised when he coached him in his one season Lorient, noting that he “needs to feel good” in order to perform well regularly.

A stellar season at Lorient saw him make the leap to FC Porto, a club which has made a name for themselves not only through their success but also through their rebuilding strategy. Star performers at FC Porto are often quickly snapped up by the creme da la creme of European football, yet despite the regular rebuilding it doesn’t derail the conveyor belt of trophies and the wily acquisition of the next set of superstars, even with the competition in the transfer market.

Aboubakar was probably bought during the summer of 2014 in anticipation of jackson Martinez’s impending move to a richer club, but It was an underwhelming first season for the Cameroonian striker. Faced with the monumental task of dislodging Martinez from the starting XI, with the idea probably that he would be groomed to replace the Colombian over the season, Aboubakar’s little playing time saw his confidence plummet and the opportunities that came his way were spurned.

This season, though, with Martinez gone, he has shown that with self-belief he has the potential to replicate the sort of goalscoring statistics which made Martinez one of Europe’s most coveted strikers. Quick, able to self-create his chances and canny with his back to goal, Aboubakar has begun to show the swagger and cocksure attitude which saw him explode to life at Lorient, not only by scoring goals but also by creating them with audacious flicks.

The eight league goals to his name and three goals in the Champions League are signs that Aboubakar is coming to life. For now, it’s a question of whether he can sustain the self-belief in 2016. When full of self-belief, there is no argument that he can destroy even the best of teams in the world.

Highlight of the Year: Assist for Danilo’s goal versus Estoril

A sublime assist which showed the variance in Abubakar’s game.