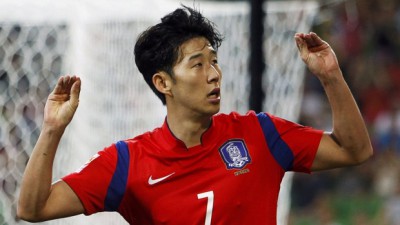 With Son Heung-Min’s big money transfer to Tottenham Hotspur confirmed earlier today, we thought we’d guide you through from an Asian football follower’s point of view of an undoubted mercurial talent who is set to become the next Asian star ready to light up the English Premier League. Martin Lowe looks at a contrasting fledgling career of heady praise, crippling national pressure but undoubted joy that will no doubt spark yet more headlines over the next couple of years.

His talent has never been in question right from when he was snapped up upon maturity whilst at the FC Seoul football academy by Bundesliga outfit Hamburg. Within a matter of months he was given his chance and immediately began repaying his German employer, becoming the club’s youngest ever goalscorer and continuously, year-on-year building on his goal scoring and ball work in transition.

When describing his playing style, this is where some myths are to be dispelled from the outset. Son isn’t an out and out goalscorer but isn’t a typified sleight winger. His willingness to chase lost causes, of course, matches the East Asian stereotype of focus and team harmony but Son is no Park Ji-Sung. While Park was the ideal “11th” man that could slot into any team and continue the work of the rest of his teammates, Son stands alone as one of or potentially the focus of a teams attacking play.

His strength which has developed since his £10 million move to Bayer Leverkusen three years back, is his enticing mixture of guile, direct focus and physical balance. He’s no great target man who will be holding off the likes of some of the EPL’s strongest defenders but he’ll not wilt under pressure when he out foxes the same opposition in the final third.

The true development in his game has been his decision-making. Too often he’d be blistering through after taking on a couple of defenders before going for goal when there was a better option on, or attempting to play in a team mate when fans screamed “Shoot!” from the stands. He’s developed a calculated brain to invent or devastate in a whisker of a second, a talent who is capable of the delicate or thunderous.

All this sounds like the perfect attacking player, and in some quarters in Asia that’s how he is pictured. With such a dearth in credible attacking threat on the continent, Son Heung-Min looks the only real prospect of breaking through to the real top of the game. The issue has been the pressure he has been put under back home, with an air of he can’t do anything right. He either excels due to the low level standard or he fails to live up to the talent he has been blessed with. Unless he is creating the sublime every national team game, some Koreans will be disappointed.

From the World Cup onwards Son has been placed in an unenviable position of a one man inspired attack, where nearly every move is engineered to involve him. In Brazil in particular he was fiercely criticised for not leading the team to victories, assuming this would have ve been single handedly given his fellow under-performing colleagues, who got off lightly in comparison.

Since the appointment of Uli Stielike, Son’s role within the national team has remained unclear. He continues to be played in his best position, off the striker to the left, with less responsibility to defend, but still his coordination with his fellow attackers remains off, he’s often left a frustrated figure who looks to be trying to hard to live up to the expectation. His ability however continues to standout, through an odd moment of genius, be it by nipping past a full back, a goal out of the blue or a stunning free kick in which he’s beginning to be known for.

The crucial area to focus on has been where has Son excelled and the answer has been for his club side. In a team full of like minded, similarly talented teammates he’s continued to improve, crucially without a heavy responsibility to often do it all on his own as he does for his country. A free minded Son, is a very dangerous proposition in any competition.

For the money Spurs are likely to shell out they can bank on experience of 5 years worth of full Bundesliga game time where he’s brought a regular goal output of 10-15 goals a season, Champions League pedigree (scoring 5 in 10 last year) and a willingness to improve. When you consider Saido Berahino, a year younger than Son was valued at the same price by his club West Bromwich Albion, it seems a no-brainer that Spurs turned to the South Korean wonder.

While Son’s been linked with numerous locations over the last few years, his attributes and ambitions clearly match Spurs’. If used correctly he’ll be a regular starter that can complement his mobile and quick transition play with Tottenham’s lone front man at present Harry Kane’s more instinctive finishing talent that would be better to kept as near to the goal as possible. This transfer could set up one of the most upwardly moving front pairings Europe has to offer.