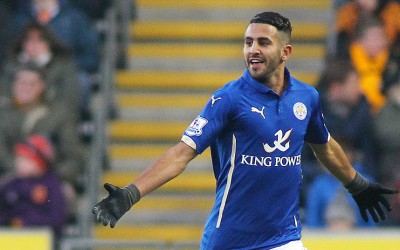 Like Franck Ribery, Riyad Mahrez never scaled the ranks of a French ‘centre de formation’. In L’Hexagone, few players forge professional careers without first passing through a centre de formation. But the ones that manage to wrest a professional contract often retain rare skillsets, left untouched by the sterilizing effect disciplined youth coaching often has.

The twinkle-toed Algerian winger was reared in the Parisian suburb of Sarcelles and only turned professional at the age of 19. Sarcelles is known for its demographic of first and second-generation immigrants, and the football cages said immigrants play in. Mahrez is a veritable joy to watch because he has carried a rare streetball style of play into the Premier League.

The opening weekend of this Premier League campaign saw Leicester host Sunderland. In the midland Saturday sunshine, Mahrez was on, scoring two goals and embarrassing any defender with the temerity to confront him. The good people of this world took great pleasure in seeing Lee Cattermole reduced to a pitiful heap as he fell victim to the Parisian ball-roll, and knocked Mahrez’s leg out from under him, conceding an all-too-obvious penalty.

One particular passage of play early in the second half toed a precious line between the frustrating selfishness of that obnoxious street player you love to hate, and the ingenuity of a world-class phenom. With three teammates in the penalty box, coaches, teammates, and supporters all screamed for Mahrez to pass. He didn’t. Leicester’s number 26 chopped in, hooked out – did that twice more – and kissed Costel Pantilimon’s right post with a bending effort. In another match, that kind of gall would amount to nothing and Mahrez would be hooked under a disapproving tempest hisses and boos. But on those (more and more frequent) days when it comes off, Mahrez alone is worth the price of admission.

An appreciative Match Of The Day panel singled out Mahrez’s glowing performance that Saturday evening. With two goals to his name, Mahrez now leads the Premier League in scoring. The biggest challenge the Algerian international will face this season is one of consistency. He will undoubtedly shame his opposition on a weekly basis, but if he can continue to put the ball into the net, Mahrez will have added a vital dimension to his repertoire. It is only then that he will develop into the elite player he’s been threatening to blossom into for the past year and a half.

1 Comment on SFG Player Of The Week: Riyad Mahrez