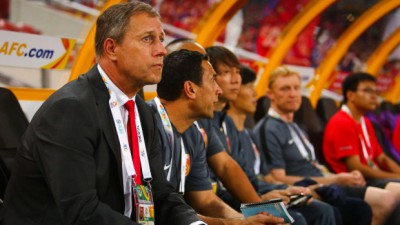 While pre-season builds up for the domestic season kick off for much of the world, in East Asia the most important regional national team competition is set to kick off this weekend as China host the sixth edition of the EAFF East Asian Cup. In the first part of our preview into the four competing nations Martin Lowe looks at the hosts’ chances of clinching the trophy and how they’ve been received outside the region since their Asian Cup exit in January.

The Chinese national team have found themselves somewhat in a divisive position over the last six months. Prior to the Asian Cup, they were billed as sleeping giants with the potential but perhaps not the direction to compete at the highest high level with their perceived continental betters.

A few weeks later they had split opinion. Did Alain Perrin mastermind what we had all hoped for in an unblemished section progression, or were they ultimately lucky in key parts of the group which saw them fortunate to make it to the knockout stages? On the site, and during our commentary, we heard opinions from both sides of the coin, but the conclusive prognosis would always refer towards future performances.

Since then, results have arguably enforced both arguments. Poor home draws with Tunisia and Haiti suggested that the Australian journey may have been a lucky shake of the dice by Perrin. However on their return to World Cup qualification (the results that matter of course) they comprehensively fired in six unanswered goals away from home, albeit past a struggling Bhutan, but it prompted praise that China could turn up when there were points to play for.

This tournament, a home games, could be widely seen as a key direction changer for Chinese football. Their strongest squad almost exclusively (Zhang Chengdong’s transfer to Spain last week, the exception) ply their trade in China, so Perrin will go into the competition with his squad in fine fettle, which can’t be said of rivals for the title Japan and South Korea, who arrive with largely B squads.

Strongest squads across the board being present, China wouldn’t expect much. However regional based squads only should prove an enticing prospect, if just for domestic league bragging rights. The CSL is one of the quickest growing leagues around after a glut of high profile overseas transfers over the summer, an East Asian title would also cement that their home product also makes the grade.

While the tournament is largely seen as a development ground for future World Cup qualification, the changing format of such will unlikely see anything as nearly competitive and as condensed as what will be observed in China over the coming fortnight. The hosts have consistency in personnel on their side, a team with comparative experience who’ll expect to deliver, with only the risk of awakening those same skeptics from six months ago.

Key Question – How will China’s defence fare against their regional rivals?

China’s greatest loss ahead of this tournament was felt through the injury of Zhang Linpeng earlier in the year. His stewardship was pivotal in their showing in Australia, an area which Alain Perrin will be looking to harness going into the campaign, as their rivals will undoubtedly target the hosts major weakness.

They will face a number of different bombardments; be it through South Korea’s aerial presence, North Korea’s movement or Japan’s quick interplay in the attacking third. All will be expected to be dealt with at arms length, given that as hosts China, if successful, will dominate possession. On the break any of their opposition should prove a test to the Chinese rearguard’s ability on the turn.

Amongst the mediocrity since their Asian Cup exit, Beijing Guaon winger Yu Dabao has impressed particularly. Notching four goals in three, including a brace in the battering over Bhutan, Yu offers a unique option in Chinese football at present: an unpredictable outlet.

His erratic nature has took time to convince Alain Perrin, but after being left out of the squad that traveled to Australia he looks to have come back more focused than ever and, more importantly, calmer in front of goal. While others slowly woke from their post Asian Cup slumber against Tunisia and Haiti, Yu took his chance emphatically to win over Perrin’s affections.

One to Watch – Liu Binbin

In the same vein as Yu, Shandong Luneng’s  Liu Binbin has gained another call up thanks to his wing wizardry in the CSL. If you like your wingers adventurous, quick and forward thinking, Liu will have your heart racing, if at times off your seat in frustration.

Liu doesn’t only offer China a greater depth positionally but as one of the few promising fledglings within the squad, he offers youth. Perrin’s selection only features two under 25s, clearly illustrating their priority to ensure silverware over development at their home games with many of the squad now hitting their prime. However, Liu could be that unassuming edge of unpredictability that could spark their victory if called upon from the bench.