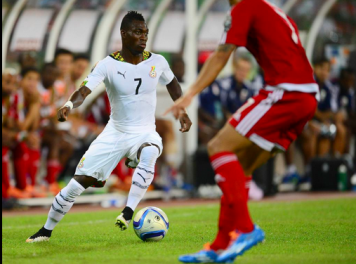 The outstanding performers from the tournament:

The discovery of the tournament. Lithe, fresh-faced, and a mere part-time professional footballer with Deportivo Mongomo, initial impressions suggest the 21-year-old would be out of his depth amongst full-time professionals.

Despite the concerns, and some McDonald Harawa moments on his part, he never looked out of place for the most part. For someone so unimposing, his spring to clutch balls that hung in the air, even when faced with several bodies to negotiate his way through, was particularly impressive. With it, his hoarding of the ball to consume those precious few seconds late on in games became a trademark which the crowd were receptive to.

There was an inquest into his defensive discipline after the opening two games, with Guinea’s and Mali’s solitary goals stemming from his individual errors, but, after being cautioned by his coach, he answered his critics with typical brio by stifling Henri Bedimo and Riyaz Mahrez in successive games.

He was at his excellent attacking best in the semi-final against DR Congo, retrieving the ball to kickstart the passage to Gervinho’s goal and his second-half header from a corner was saved onto the path of Kanon to thigh it onto the roof of the net.

It is his attacking play which caught the eye, but an understated part of his attacking game was the goal threat he caused at set pieces.

What the Ivorian defence needed before the tournament was consistent reliability. And the last person you expected it to come from was an untried 21-year-old playing in an unconventional 3-4-3/5-2-3 system. It is on that note that ADO Den Haag’s Kanon makes it into this team ahead of the soothing solidity of the experienced Kolo ‘Minister of Defence’ Toure.

Kanon, uncapped until the pre-tournament warm-up friendlies and thus untested in competitive action, has provided the required reliability with steady, faultless performances throughout. The Cyrille Domoraud Academy graduate’s pace also gave Herve Renard the option of deploying him at left back when he opted for a back four, as he did initially in the opening game against Guinea and later on versus Algeria and Ghana.

Infamously pictured kissing a stash of cash in Ghana’s bonus saga during the World Cup, it will come as no surprise that the Black Stars’ defence was at its most economical, most stingiest with Boye at the core of operations.

Boye first sampled AFCON 2015 action when coming on for the injured Daniel Amartey in the 36th minute of the 2-1 win over South Africa, and he brought with him a no-nonsense, safety-first brand of defending which would see Ghana not concede a single goal for the rest of the tournament.

The Augsburg left back packed his brimming club confidence and brought it to the tournament. He had an excellent AFCON, underlining his precociousness in the final by containing the dangerous Ivorian trio of Serge Aurier, Gervinho and Max Gradel down his flank.

He notched a crucial assist too – his cross for Dede Ayew’s winner versus South Africa was decisive in what had become a must-win game for Ghana.

Comfortably one of Ivory Coast’s hardcore performers at the tournament. A prolific fouler and regularly high tackler, El Gladiator did the dirty work and hard running for an unfit, more creative midfield partner in Yaya Toure.

The standout performance came in the quarter-final clash with Algeria, where he took advantage of the referee’s reluctance to brandish yellow cards to nullify the fleet-footed Yacine Brahimi, and won the ball in his own penalty area deep in injury time before releasing the ball for Ivory Coast to get the sealing goal.

DR Congo finished third with only one win in their six matches, and Anderlecht’s Chancel Mbemba played a significant part in how hard they were to beat. His preferred position is at centre back, but it was in maelstrom of midfield where he would produce a string of assured performances.

His tidy passing kept the DR Congo midfield ticking nicely, ensuring the team always had enough of the ball to have some control of the game. And he relished the physical duels, too, dominating both Serey Die and Yaya Toure in the opening hour of the semi-final.

A slow start to the tournament for Atsu, but the Everton loanee resuscitated his best form when Ghana needed it most – in the must-win group game clash with South Africa, and then the cutthroat knockout rounds, scoring what many consider to the goal of the tournament against Guinea.

He was undoubtedly the liveliest player in a classically cagey final, his pace and skill on the ball causing severe problems for the ageing Siaka Tiene.

Gradel was Grade A. He faded in the semi final and final, but this has always been a man of moments rather than stellar, game-by-game brilliance. His moments came in the Elephants’ toughest run of fixtures. There was the late equaliser against Mali, the thunderbolt to beat Cameroon goalkeeper Fabrice Ondoa from long range, and the deliciously inviting cross begging for the connection of Bony’s head versus Algeria.

He was defensively excellent in the latter game, making a game-high 6 tackles to curtail the attacking threat of Faouzi Ghoulam. It is not hyperbolic to say that Gradel was one of the key individuals in the Ivorian’s success.

One of the easiest players on the eye at this tournament. Having been on the books of Real Madrid Castilla, Balboa showed the razzle-dazzle that had piqued the interest of the superclub many years ago.

In Iban Edu and Kike Equatorial Guinea had incredibly raw players in their attack, but the well-seasoned Balboa’s head was calm enough to provide the match-winning quality in the dramatic quarter final; scoring the late penalty to keep the hosts in the tournament, and then a fantastic free-kick in extra time.

In simple terms, Congo would not have made it through the group stages without Bifouma. While other target-man strikers were largely underwhelming in this tournament, Bifouma’s hold-up play, link-up play and off the ball movement were the hallmarks of a high level striker who was primed for battle.

That Congo made it through as group winners with the highest points tally (7) is still a mystifying blur of under-performance from other teams and opportunism from Le Roy’s side, but the individual quality of Bifouma can’t be discounted.