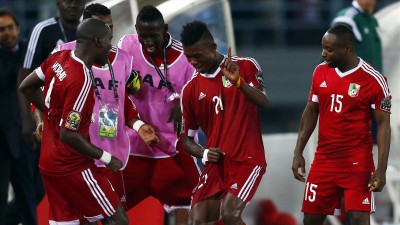 The 2015 AFCON draw always had a bottom heavy feel, and that notion has only been lengthened by the manner in which the group stages played out. Although the likes of Senegal, South Africa and Mali should lament their own separate deficiencies for falling at the first hurdle, the trio could be forgiven for ruefully gazing across at the other side of the draw.

In advancing against substantial odds, both Congo and Equatorial Guinea scripted compelling narratives – the sort of stories that makes AFCON the mystical tournament it is – yet it is difficult to envisage that either would have negotiated more arduous assignments. At the same time, it’s hard to recall a less inspiring quarter-finalist than opportunistic DR Congo, who progressed both without winning a single game and scoring only a paltry two goals.

To a large degree, the unbalance that has infused is merely an inevitability of tournament football and lamenting fate represents a somewhat frivolous task. Nonetheless, the seeding format utilised does provide room for scrutiny.

In contrast to using the much maligned FIFA World Ranking system, CAF employed a policy based around the previous two AFCONs and qualification for the 2014 World Cup. In hindsight, that makes logical sense – so much so that many have campaigned for a similar format being employed in all major international tournaments – yet there is a danger that circumstances can change vastly over such a prolonged time period.

Although FIFA’s ranking system is far from fool proof, it does arguably offer a more reliable indication of where a country is at. For instance, Zambia were ranked as top seeds under CAF’s system – primarily due to their memorable AFCON triumph in 2012 – however, of the nations summoned to Equatorial Guinea, only three are ranked lower.

Rewarding recent accomplishments is both respectable and valid. Further to that, it is a variable other tournaments would be advised to consider when allocating seedings. Nevertheless, as is the case, when solely relying on rankings there is potential for anomalies.

Equatorial Guinea being hosts and therefore warranting a place amongst the top seeds always meant a level of disjointedness would be unavoidable. That being said, it is a quite remarkable twist of feat that Group A compiled four of the five lowest ranked nations according to FIFA, although Burkina Faso – who were 2013 finalists and came within a goal of gracing the World Cup – arguably have reason to be aggrieved with such a rating.

In reality Group A was hardly helped by both the Burkinabe and Gabon freezing in the face of the arguably unreasonable expectations, which were only enhanced by the appetising draw. Burkina Faso have always lacked killer instinct; however, few would have fully anticipated the extent of either their wastefulness or numerous uncharacteristic defensive lapses – although debatably the Stallions biggest stumbling block came in the form of being transformed from the hunter to the hunted.

Group B is the assortment that will leave a particularly bad taste, yet had the pots been assigned by ranking then the exact same quartet would have been a possibility. There is little denying that luck was the overriding factor in DR Congo advancing over either Cape Verde or Zambia, given that between them the trio contributed five of the group’s six and combined offered just five goals.

Like Burkina Faso, it didn’t help that Cape Verde were somewhat found out and whilst Group B will be categorised by words such as dour and depressing, that damning assessment can be attributed more to being “one of those things” rather than any grand injustice on behalf of the draw. Moreover, it would be unrealistic to expect classics across the board – football simply doesn’t work like that.

Group D was, without question, the epitome of a “Group of Death”, yet in reality it is common practice for a tournament to contain such a fearsome compilation, where fortunes joins together the strongest sides from each pot. However considered, this collection contained three of the five highest ranked teams in the tournament, although that Senegal were ranked so highly despite missing the 2013 AFCON and the 2014 World Cup is another point of contention regarding the rankings. Similarly, though they have improved beyond recognition in recent months, South Africa failed to make the final round of World Cup qualification – falling victim to Ethiopia.

Group D consisted of four of the highest nine rated nations, but again a Cameroon side who failed to qualify for the two last tournaments can have little room for bemoaning their hand. Likewise, Guinea have accomplished little of note in recent despite a perversely high ranking of 38th in the world.

Despite the perceived imbalances, the quarter-finals have still thrown up four enticing contests. Having created some of the tournament’s most memorable moments, to still have Equatorial Guinea in contention is an undisputable positive for the tournament, whilst the Congolese derby between Claude le Roy’s Congo-Brazzaville and DR Congo is amongst the most intriguing ties on offer.

For those sides who navigated a passage through the more arduous section of the draw, there is now the carrot of what will likely be a favourable semi-final opposition. At the same time, prospering in such testing groups will bread both momentum and confidence. With that in mind, it wasn’t surprising to hear Asamoah Gyan report that belief was sky high following Ghana’s topping of Group C.

Ultimately, to rise above the rest in major tournaments you will at some point be required to beat off the cream of the competition –  should, say, Ghana, Algeria or Ivory Coast lift the crown, then they will certainly have earned it.

Yes, the draw has proven top heavy, but such a scenario has allowed the development of captivating stories involving both Congo and Equatorial Guinea; narratives which will only benefit the tournament.