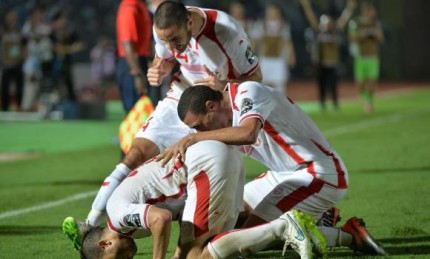 The Chipolopolos (Copper-headed bullets) were the first team to raise the curtain of this exciting Group B in a hotly anticipated TP MaZambia derby against their neighbours DR Congo last Sunday afternoon. The first half would see them taking an early lead thanks to Given Singuluma’s lovely finish. The second half would see Honour Janza’s men playing it safe and parking the proverbial bus, leaving the offensive ambition of the first half in the locker room. The Chipolopolos would be punished by Congo and were lucky to escape with a draw considering their second half performance.

Tunisia, for their part, had to face the Blue Sharks of Cape Verde in the closing game of the Group B first matchday. The Carthage Eagles struggled to break down a resilient Cape Verde low block and it was clear as the whiteness of rice that Tunisia was missing the injured Fakhreddine ‘El Rouge’ Ben Youssef’s profile and qualities.

A dull first half saw Tunisia disturbed by Cape Verde’s pressing, while the second half performance was more offensive albeit still fragile. Tunisia did have some chances (and a wrongly disallowed goal) to finally break the Cape Verde deadlock, and they did so thanks to a lovely move which started with a smart pass by Jamel Saihi to the flying left back Ali Maaloul, whose low cross found CS Sfaxien teammate Mohamed Ali Moncer. The advantage would only last a few minutes as Cape Verde were awarded a very controversial penalty.

As this group, and this AFCON in general, is amongst one of the tightest, each point gained or lost will be crucial in the race for the qualification. Both teams in tomorrow’s game will be revengeful.

Zambia, after a disappointing first game in TP MaZambia derby, will have to put on a much better display if they want to take something in this game. Do they have the ability to do so? On the paper, yes, with likes of Rainford Kalaba and Ronald Kampamba, but it’s worth remembering that the AFCON 2012 winners will have to face Tunisia without their dynamo and midfield conductor Nathan Sinkala, who’s been ruled out of the rest of AFCON after the injury he sustained versus DR Congo.

Tunisia are in the same case as Zambia. But the Carthage Eagles have to find the chemistry, especially on the attacking front, if they want to take something from this tricky game. They must be defensively wary to avoid the Chipolopolos’ counters, which are always very dangerous with the speed of copper bullets like Kalaba, Mayuka or even Kampamba.

5 – Tunisia and Zambia will meet each other in an African Cup of Nations for the fifth time of their history. Classic.

0 – Zambia have not managed to beat Tunisia in their previous four AFCON meetings. Jinx?