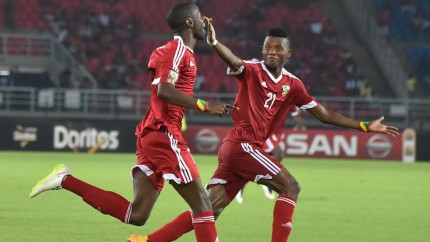 There was a reported bust up in the Burkina Faso team coach in the aftermath of their opening game defeat to Gabon, with the commitment to the cause of some players questioned and, allegedly, the lack of Aristide Bance in the starting XI.

Bust-ups are normal in football, particularly when emotions are higher due to the high stakes of tournament football, but no emotional voltage should disorientate anyone’s train of thought, including that of Burkina Faso players’, on Aristide Bance. He often lacks the mobility, awareness, finishing and general all-round play to play for a team with serious aspirations of winning the Africa Cup of Nations.

His unsuitability to the Burkina Faso attack was all on display yesterday as the Equatorial Guinea’s defence was rarely troubled. Burkinabe attacks were curtailed either by his lack of movement, poor decision-making, lack of pace or poor hold up play. Compare that to the trouble Thievy Bifouma caused the Equatoguinean defence in the first game of the tournament with all the hallmarks of a top level striker, and the difference is staggering. That Bance lasted the full game, despite Paul Put only having used one of his substitutions, was even more staggering.

The 30-year-old is living off his past reputation – and not even a lengthy reputation at that. Bance is exclusively living off a single performance: his fantastic all-round performance against Ghana in the semi final two years ago. In his last 7 AFCON appearances he has now only scored 1 goal (in that semi-final against Ghana), he only scored once during qualifying, and he has been bench-warming at HJK Helsinki all season. Loveable? Yes. Good enough? Not for Burkina Faso.

Despite having less possession, Congo won the midfield battle vs. Gabon. Prince Oniangue continues to find the net from central midfield. The Stade Reims man has a certain nose for goal, always appearing at the right place at the right time. His offensive tendencies blend in well with Delvin N’Dinga’s propensity to sit in front of defence. If Oniangue and N’Dinga can continue to win battles in midfield, Congo can make a deep run in this tournament.

Gabon fail to take their chances

With a dangerous front three of Aubameyang, Evouna, and Bulot, Gavon will always create chances. One of the Panthers’ biggest problems on Wednesday night was a lack of efficiency in front of goal. Bulot, in particular, was wasteful putting a golden opportunity to waste. Evouna needs to learn the offside rule or he will continue to throw away important attacking sequences of play. Gabon just need to sharpen their concentration levels in the final third, and they will be fine.

If Gabon can reate and merely can’t finish, Congo have a banal attack. The Red Devils rely on the individual brilliance of Bifouma or a defensive lapse to pounce, and though it has worked thus far, it is not a sustainable plan of action in a tournament of this magnitude.

Deficiencies of Gabon also on display

Undoubtedly the purest counter-attacking side in the tournament, Gabon’s deficiencies with the ball are apparent even in free-flowing games. Their build up play is either too rushed or the passing from their midfielders can go astray – even usually reliable, defensive-minded ones in the form of Didier Ibrahim N’Dong and Andre Biyogo-Poko don’t always make the best decisions with the ball.

This weakness was exacerbated further by them falling behind. As Congo retreated in the final quarter of the game, Jorge Costa’s side were even more inefficient with their usage of the ball despite having more possession. Out of all the players they have on the pitch only Levy Madinda at present seems able to provide the incisive pass, and even he can be too slapdash with the ball.