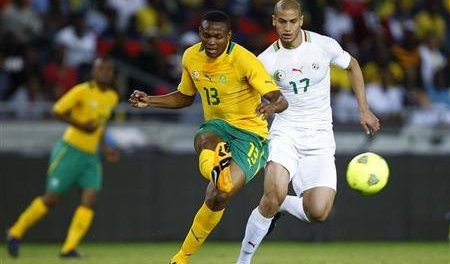 Andre Ayew’s early goal put Ghana ahead to make all look positive, but it was Senegal who made the Black Stars look good in the first place. Ghana sat very deep, thus making Senegal come onto them. Senegal, with few creative players, couldn’t break them down but left space at the back themselves.

With their wing backs advancing high up the field Jordan Ayew and Christian Atsu, to their credit, dropped into the spaces around the outside centre backs of Senegal’s back three and caused problems. They created clear chances and the penalty stemmed from there. However, this was Ghana’s only mode of attack and Alain Giresse was smart enough to block the flow in the second half.

Giresse wins it with his change to a back four

Giresse decided to bring on Lamine Gassama for Papy Djilobodji and all of a sudden there was no obvious space for Ghana to exploit. After an impressive first half performance there Jordan Ayew couldn’t get into the gaps he was before. With Avram Grant employing a new 3-5-2 system, the team weren’t making the movements required of the midfielder and strikers to allow their wing-backs to get forward and provide width meaning they were pinned back in their half.

On the other hand Senegal managed to pin back Ghana’s wing-backs by combining there wingers and full backs effectively. Senegal’s first goal came from good wing-play and having the quality of somebody like Moussa Sow coming off the bench won the match for them.

Giresse made a good tactical switch and should be given credit for that but what should be worrying for Ghanaians is the fact that Grant didn’t respond in any way to Giresse’s move. You don’t pay a man like Grant that much money to do a job you could get Kwesi Appiah to do for far cheaper…

It’s easy to dwell on Algeria not going down to 10 men for Aissa Mandi’s last-man foul for the penalty, but the simple fact is that Les Fennecs’s superiority told in the end. It wasn’t the sort of bullish, contemptuous superiority that breaks makes opponents throw in the towel. Rather, it was just South Africa not quite having the quality to really beat them, despite facing them on what can be classified as a bad day at the office.

Given Rantie’s penalty miss, was there an element of luck involved? Of course, but you have to dip into your mental reserves in these high-pressure games; such mental setbacks have to perish from the mind. Bafana Bafana had several chances to convert their thrillingly incisive and intricate style of football into something of substance, but they never looked like they were ever going to, before or after the goal.

And then there were the mistakes. Simple mistakes that teams which lack the quality end up making as the game slips away. The manner Faouzi Ghoulam brushed Manyisa aside, like a rugby forward would to a full-back, before Algeria’s second goal illustrated this difference, as did goalkeeper Darren Keet letting the ball sleep through his hands for Slimani’s final sealer.

Perhaps it was poor concentration, a lack of quality and a lack of experience, or a mixture of all those things. To put it simply, though, they were not good enough for 90 minutes.

One of the drawbacks of Algeria’s successful World Cup campaign is the onus, at least in a tournament like this, is now always on them to take the game to the opposition. They coped with the expectations splendidly in AFCON qualifying, but it’s one thing terrorising Joseph Kamwendo’s Malawi and Ethiopia, and quite another when you’re facing more polished, well-rounded sides in tournament football.

Due to their inexperience at the highest level, and lack of bona fide stardust, this South Africa team were not the stiffest of examinations to test Algeria to the brim. But they showed that the backline is not the quickest and can become quite panicky when isolated, deliberately lofting balls over the defence for Rantie to work with.

Ghana and Senegal, two of the better quality sides in the tournament with the blend of pace, power and top quality strikers, are likelier to test the likes of Rafik Halliche and Carl Medjani to the brim.

If they pass at least one of those tests, further tests are likelier to come from Group D in the knockout stages. A slow defensive pair is quite a severe weakness in an AFCON and it will be interesting to see how Algeria negotiate their way through AFCON with such a debilitating deficiency.