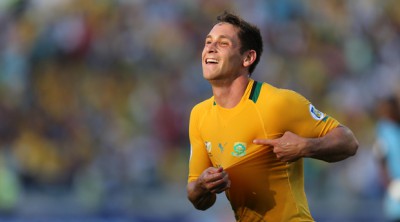 Back in December, during a soggy morning at Doncaster Rovers’ Cantley Park training ground, England, Dean Furman grins, and casts his mind to the warmer climes of Equatorial Guinea, hosts of the Africa Cup of Nations.

The South African’s affable demeanour seems at odds with his role as an enforcer in the centre of midfield. But having trudged through the lower leagues of British football after leaving Chelsea as a kid to losing international team-mate, and friend, Senzo Meyiwa, it is understandable Furman has another side to his determined character.

Tomorrow, Furman, 26, hopes to walk Bafana Bafana out for their opening round fixture against Africa’s top-ranked nation Algeria. They must then contest with Ghana and Senegal to escape Group C and secure a place in the knockout rounds. While dubbed underdogs, South Africa’s recent renaissance under coach Ephraim Mashaba, including a 10-game unbeaten run stretching across the Africa Cup of Nations qualifiers, offers encouragement.

Their progress, though, was dwarfed by the death of goalkeeper Meyiwa, killed by attackers while at his girlfriend’s home, midway through qualifying in October.

Given the captaincy at the start of their qualifying campaign, Meyiwa “did it with exemption, keeping four clean sheets,” Furman says, as he begins to reel off the talismanic leader’s qualities that helped rejuvenate the squad. “But off the pitch what a lot of people didn’t see was his character, his positivity and his big smile that got everyone around him going.”

With Meyiwa’s passing, experience was required and Furman found himself appointed captain for the last two qualifying matches in what “was the worst possible circumstances”. While Mashaba has been experimenting with the captaincy recently ahead of the tournament, did Furman have any doubts about accepting it at the time? “No,” he says softly. “I got offered the role in front of the team the night before the penultimate qualifying game against Sudan and it was definitely one of the proudest moments of my career. It’s something I would like to continue doing.”

Furman led the team out for his first match in charge to an emotional Durban crowd, the game moved from Nelspruit to Meyiwa’s home city. With title-holders Nigeria up next in their final qualifier, victory here was paramount and enough to seal their place in the tournament. Goals from Thulani Serero and Tokelo Rantie gave South Africa a lead Sudan were unable to come back from.

The locals were elated; the team meanwhile spent a quieter moment of reflection, enjoying dinner together and recounting their achievement. “We didn’t celebrate,” Furman says. “It was a nice feeling to know we’d got over the line with a game to go, but there were a lot of emotions about that game.”

Hosts of the 2013 Cup of Nations, so automatically given a place in the tournament, seven years have passed since Bafana Bafana last reached the finals through qualifying. “It was a very positive for us,” Furman says of a campaign that saw them top their qualification group. “The great thing for us is there’s such a big pool of talent in South Africa and having them involved in the national team at a young age can only bode well for the future.”

Yet Furman is adamant that it was in fact failure that demonstrates the team’s development. “I think one of the signs of how far we’ve come is to come off the pitch after both games with Nigeria and be disappointed we’ve not won. “Nigeria are a footballing powerhouse. They have top players who play in the best leagues in the world so it is really a sign that we are on the up and we can go into the tournament with a lot of confidence.”

Having previously been lost in the depths of the English Football League at Bradford City and Oldham Athletic, it took until 2012 for South Africa to select the former Chelsea trainee. “Sometimes I have to pinch myself,” Furman says. “It’s one of the things that I never thought would happen. I got the opportunity to join the squad, give it my all and see what happens. The next thing I’m starting against Brazil.”

His rapid ascent mirrors that of the national side, whose mix of gritted defence and forward flair could see them surprise a few in Equatorial Guinea. “We know Ghana and Algeria had a good World Cup, and Senegal have top players who are playing in the Premier League. But we also have some terrific attacking players, and we know if we give them a base to go forward then we can beat anyone on our day.

“We have a belief within our group, it’s a tight-knit group. We want to become one of the biggest nations in African football. To do that, we have to go and prove ourselves at the top level in the biggest tournaments. So for us, it’s important we control our expectations; but we believe we can go all the way, otherwise there’s no point in us attending.”

South Africa has only ever reached the Cup of Nations final once, in 1996, where they won in front of a home crowd. And Furman is quick to reply when reminded of their achievement, a smile emerging as he acknowledges the burden of almost 20 years without reward for the national team. “The ’96 team is incredible for what they did and we talk about it all the time. But we want to create our own history now. This bunch of players definitely has the ability to go on and do that.”