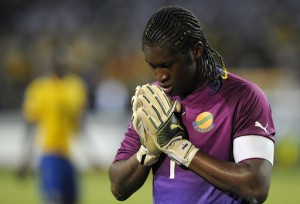 My Player of the Day on the opening day of the African Cup of Nations goes to Didier Ovono. The goalkeeper made a number of vital saves throughout their Group A encounter with Burkina Faso. Ovono has been a part of this Gabon set up for over a decade and he has previous for great Cup of Nations performances after his heroic display against Cameroon in 2010. It wasn’t quite as dramatic today but Ovono, who plies his trade in Belgium for Oostende, was excellent whenever called upon.

It all began in the 12th minute when he saved Bertrand Traore’s stinging effort. After half an hour he was faced against Burkina Faso talisman Jonathan Pitroipa and came out on top, although Pitroipa should have done better. Ovono got the better of Pitroipa again a few minutes later as Burkina Faso looked to pile on the pressure before half time.

That is also how the match unfolded early on in the second period. Gabon were pushed back as Burkina Faso looked to equalise and shortly before the hour mark they forced Ovono into his finest moment in the game. Bertrand Traore beat his man on the left flank and fired a shot at goal from a tight angle as Ovono got down and palmed it away. Five minutes later Gabon doubled their lead to ease the pressure.

He may not have made any blockbuster saves today, but he made important saves at important moments in the match to secure the vital three points for Gabon. With all the focus on Pierre-Emerick Aubameyang and the Gabon attack, if Ovono can play this well throughout the tournament then Gabon could be very tough to beat.