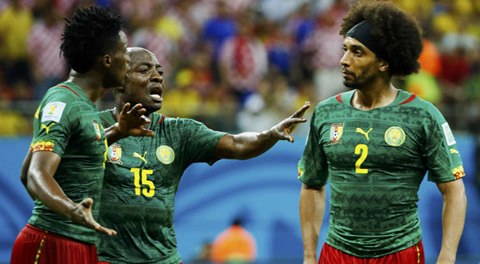 All the talk of ruined legacies post World Cup resided around the capitulation of the hopes, however in Cameroon African can boast its own nation whose historical star has most definitely burnt out.

Historically, Cameroon have been Africa’s standard bearers – with that status built on their exploits at Italia 1990 which saw the Indomitable Lions become the first side from the continent to progress to the last eight of a World Cup.

A golden generation between the late 1990s and early 2000s followed to further cement their place on the top of the African apex. Whilst that side disappointedly failed to leave a World Cup imprint they reinforced their country’s stranglehold in the form of successive African cup of Nations victories between 2000 and 2002. At the same time, a captivating Olympic Games gold medal success in Sydney only further endeared them to the worldwide masses.

Gradually, though, things have gone sour – although that fermenting process has picked up significant pace over recent years. Cameroon’s car crash showing in Brazil might have caught the casual supporter – still with memories tarnished by the romance of 1990 – by surprise. However, dig a little deeper and their catastrophic implosion was depressingly predictable.

A desperate showing in South Africa four years gave a glimpse of Cameroon’s slide, but it was the embarrassment of failing qualify for either the 2012 or 2013 African Cup of Nations that truly highlighted the depths of their fall – in 2012 being piped by neighbours Senegal, and a year later suffering the ignominy of being ousted over two legs by Cape Verde.

In truth, they were fortunate to have even made it to Brazil. Their first substantial slice of luck was delivered in the form Togo fielding an ineligible player when the sides met in the group stage second round – thus turning a point into three for Cameroon – which resulted in resolute yet unexpansive Libya visiting Yaoundé in the final round of games requiring victory rather than a point.

If that wasn’t enough Volker Finke’s side were handed a hugely favourable playoff draw in the form of Tunisia – by some distance the weakest of the five seeds – with that kind hand meaning Cameroon avoided the likes of; Ivory Coast, Ghana and Algeria.

In spite of the strife experienced in the years building up to Brazil, a 4-1 second-leg mauling of the Tunisians – in which Cameroon displayed cohesion levels that had almost permanently vacated their football in recent memory – hinted that a corner was being turned. It was, however, to prove a distinctly false dawn.

Even prior to the World Cup there had been plentiful evidence of the infighting and friction amongst the squad that typified their Brazilian nightmare – with their qualification campaign being plagued by speculation of rifts and disharmony amongst the group. This is no new sensation either, with failed showings in both the 2002 and 2010 World Cups being personified by inner squabbling.

Undeniably Cameroon’s much maligned players have not been aided by a football association plagued by corruption and mismanagement. Their current president resides in jail whilst that earlier mentioned pivotal clash with Libya might have not even gone ahead had FIFA not reversed a ban put in place due to government involvement. This hardly represents the sort of platform that success can build on.

Nobody quite expected their Brazilian disintegration to be quite so calamitous, nonetheless what the nightmare of Brazil does highlight is the sorry demise of a nation who once lit up the entire world for all the right reasons.

Regrettably the future offers no hint of light at the end of a never ending dark tunnel, for there is only so long that Cameroon can continue to mask persistent backbiting amongst players and constant hierarchy controversy – sooner or later the World Cups will stop coming, just as the African Cup of Nations have done.

A lack of talent is not the significant issue – at least in comparison to the majority of Africa. What must be addressed is the causes of a constant absence of even a hint of squad collectiveness and cohesion. Moulding a functioning side of a personnel dispersed around all corners of Europe is not an African issue unique to Cameroon, yet nobody can come close to their trend of consistent fracas.

In order to haul themselves out of similar doldrums Nigeria – under the guidance of the inspirational Stephen Keshi – elected to dispense with their much criticised experienced egos in favour of a young group. Cameroon could do well to utilise a similar philosophy, although unearthing a of coach of Keshi’s qualities represents a significant stumbling block.

You might think Samuel E’to’o – undoubtedly his nation’s greatest ever footballer in regards to ability – would have the power to set a positive example, yet the 33 year old only served to be the ignition to a plethora of bust-ups. In many ways the retirement of E’to’o – the man who last year accused teammates of deliberately avoiding passing to him – might aid the easing of tensions between a squad clearly divided.

The future for this once prestigious footballing nation appears bleak to say the least. As Patrick Suffo – capped by the Indomitable Lions 29 times – recently hinted, there is a tradition of brushing the all too familiar troubles under the table, which signifies no immense shock accounting for the dishonesty and exploitation of those at the helm.

What Cameroonian football requires is a complete overhaul from attitudes to organisation, yet that looks a distinct pipe dream accounting for the merits of the country’s FA.