In September 1954, a devastating earthquake shook the city of Chlef (then Orléansville), two hundred kilometres west of Algiers. 1,500 people lost their lives and an additional 25,000 were displaced. Chlef’s civil infrastructure was also decimated. The following morning, French sports magazine L’Equipe relayed a good idea to the French Football Federation: Why not organize a charity match with proceeds directly contributing to rebuilding the city and helping the displaced?

The FFF took the idea on board and decided to pit a ‘Metropolitan’ team, made up of French internationals, against a ‘North African’ select side, made up of players of players of North African descent. The match was to take place at the Paris’ Parc des Princes and though ticket prices were set at a steep 450 francs a stub, it did little to deter an excited crowd of 27,000 from attending such a unique fixture.

In the build-up to the match, French newspapers put forth different agendas. Right-wing publication Le Figaro predicted a resounding ‘French’ victory. On the 7th of October, L’Equipe said that the ‘veritable’ French side was going to play a North African side. A statement, which, if read cynically, reflected the undisguised structural racism inherent in colonial French institutions.

The AFN team would score a historic 3-2 triumph, changing perceptions at home and abroad about the inherent quality of players from colonized nations. Just fifteen days after the match was played, the Front de Liberation Nationale (FLN) declared the birth of an Algerian revolution. For Algerian players plying their trade in France, an inner tension began to flower as fellow countrymen were fighting for independence back home. The culmination of this identity crisis led to 13 players deserting their French football clubs to play for a team formed by the FLN, in 1958.

The aforementioned Zitouni and Ben Tifour would spend the next four years – the prime of their careers – travelling the Middle East, the Communist Bloc, and Southeast Asia in an effort to raise international sympathy for the Algerian independence movement.

Their efforts were successful and ten years after France vs. Afrique du Nord, Algeria had gained its independence. A crippling, honourable, and dishonourable war had been waged and won. Algeria was now a budding socialist nation desperately seeking recognition from the international community. Ahmed Ben Bella, the first President of this new republic, set about inviting celebrated personalities in a quest of legitimacy. During his presidency, Che Guevara, Malcolm X, Nelson Mandela, Pele and countless other notables visited Algeria to consolidate its status in the international arena.

Ben Bella was a handsome, charismatic athlete to boot. In his heyday he played for Olympique de Marseille before the revolution forced him to re-evaluate his priorities. The realm of sport was, thus, not excluded from the legitimization process.

On January 1st 1964, the Algerian Football Federation invited West Germany for a gala match. The infamous Sepp Herberger promised the best West Germany had to offer, and he delivered. Captain Hans Schäfer, Uwe Seeler, and Hans Tilkowski led a talented troupe of players into Algiers.

But Algeria had their own idols to call on.

A few FLN team veterans, who had spent the better years of their career in untelevised footballing hinterlands now had the chance to prove their worth to an adoring domestic public. Rachid Mekhoufi, the excellent Zitouni, Ahmed Oudjani, and Abderrahmane Boubekeur were bona fide Algerian footballing icons, and they were selected for this biggest of matches.

In reality, this encounter was but an innocuous friendly. Yet for a dawning postcolonial Algeria, it was an act of validation. The unquenchable thirst of substantiating Algeria’s legitimacy now manifested itself on a pitch.

Stade du 20 Aout was the preferred venue to host this mythical match, and it was brimming by kick-off. Former Algerian journalist, Djamel Benfars recalls the physical abuse he endured upon entering the stadium. “The entrance was a melee. Elbows were thrown and everyone ate a few. Though we forgot about the blows when seeing that one and true team. For me, the best ever team.” 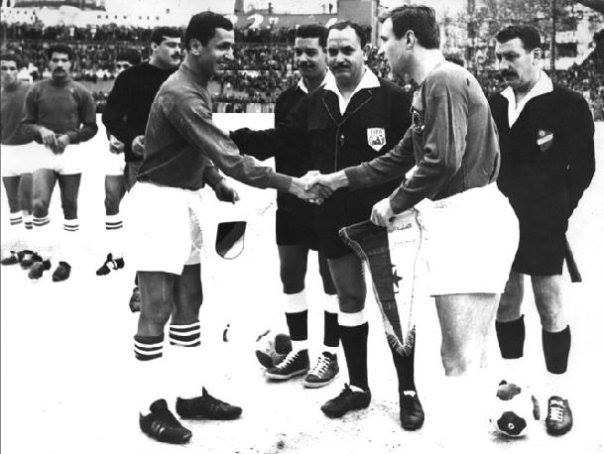 Captains Mustapha Zitouni and Hans Schäfer at the Stade 20 Aout

On the day Algeria were irresistible. The aging Amar Rouaï and Rachid Mekhloufi now had sore knees, but both were orchestrating affairs in midfield. Though he missed a few goal-scoring opportunities, Ahmed Oudjani was divine in attack. The best compliment that could be paid to Mustapha Zitouni on the night was that he played to his reputation.

Algeria broke through eight minutes in via Stade Rennais’ Mahi Khennane. Les Fennecs doubled their advantage when Oudjani finally converted one of his many chances before half. The final thirty minutes of the match saw goalkeeper Boubekeur solicited often, but he stood unwaveringly before each German assault. The former Monaco keeper would even save a Hans Schafer penalty kick, throwing his large frame to the right and parrying the shot out of play.

Algeria would win two-nil in front of a raucous crowd – a foreshadowing of their first ever World Cup victory 19 years later. That team was Algeria’s first golden generation and they spent their best years away from official competition. Their legacy transcends sport and exists in a political and social sphere. The FLN team never brought Algeria to a World Cup, but they did bring Algeria to life.

Les Fennecs would wait twenty years for a new golden generation to emerge. Algerian football next flourished in the early ‘80s when the likes of Rabah Madjer, Lakhdar Belloumi, and Djamel Assad burst onto the scene and represented Algeria in their suffocating polyester Sonitex kits.

Their World Cup was Spain 1982 and they were up against it from the outset. Group 2 consisted of European champions West Germany, a coriaceous Austrian side, and a tricky Chilean outfit. Though they played breathtaking football in World Cup qualifiers, no one gave Algeria a chance in Spain, least of all the Germans.

This German team were perhaps even more talented than the 1964 side that lost at the Stade du 20 Aout. The fearless Karl-Heinz Rumennigge, the evergreen Lothar Matthaus, rockstar Paul Breitner, they were all household names. But the quality in personnel seemed to translate to excess confidence.

Coach Jupp Derwall initiated the impudent remarks, claiming that if West Germany lost to Algeria, he would jump on the first train back to Munich. “One player said that he would play against us with a cigar in his mouth,” recalls Chaabane Merzekane Algeria’s right-back. 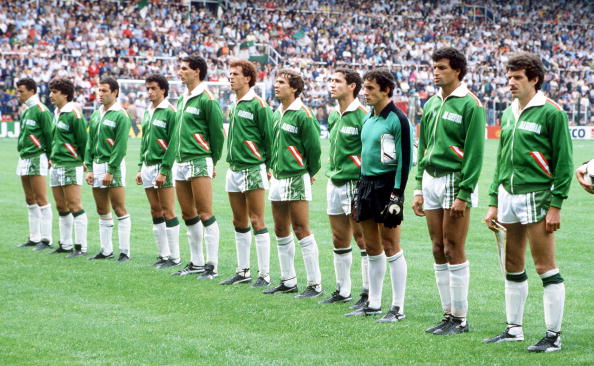 The Algerian XI vs. West Germany in 1982

Algeria would go on to win 2-1, playing their brand of sublime football. Madjer, Belloumi, and Assad wove intricate passing patterns that a well-drilled German backline had no answer to. Mehdi Cerbah was indomitable in goal as he frustrated Rummenigge time and time again.

After winning their first ever World Cup match, the inexperienced coaching staff failed to temper the subsequent euphoria. As a result, the Algerians were not prepared for a forewarned Austrian outfit, which cruised to a 0-2 victory. In the final match of the group stage, Assad led his teammates to a 3-2 victory over a tricky Chilean side. With two wins in the bag, Algeria was set to become the first African nation to progress beyond the first round. Only a 1-0, or 2-0 win for West Germany over Austria could deprive the North Africans of an imminent historic achievement.

What followed was dubbed the ‘Shame of Gijon’ as Austria and Germany played to a mutually beneficial scoreline. Horst Hrubesch scored early before both sides stopped playing, only hollowly going through the motions.

At one point in the match, Uli Stielike stopped the ball and looked to his left and right five times, before settling for a five yard pass. Paul Breitner spent 25 seconds walking laterally with the ball in his own half. Austrian midfield Reinhold Hintermeier feigned ambition, but his pantomime shot flew 20 yards over the crossbar, fooling no one.

In one corner of the pitch an angry Algerian spectator with malicious intentions tried a pitch invasion. Fortunately, he was stopped, but the rest of those present were equally irate.

‘!Que se besen(Just kiss each other),’ they sang at the 60th minute. ‘!Fuera (leave),’ was the chant at the 70th. Fans in El Molinon quickly sympathized with the North African victims. This time, they chanted, ‘!Argelia, Argelia.’ Incessant jeering drowned out Bob Valentine’s final whistle at full-time.

To add insult to injury, post-match comments were downright hurtful, if not borderline racist. An Austrian official, Hans Tschak ranted, “If 10,000 ‘sons of the desert’ here in the stadium want to trigger a scandal because of this, it just goes to show that they have too few schools. Some sheikh comes out of an oasis, is allowed to get a sniff of World Cup air after 300 years and thinks he’s entitled to open his gob.”

The Shame of Gijon left an indelible mark on Algeria’s footballing psyche. Algeria remains the only nation to have been eliminated in the group stage despite winning two matches. When asked what message he would like to pass on to today’s squad, Ali Fergani, captain of that golden generation paused, then said, ‘Help us forget 1982.’

That mental hurdle was cleared on Thursday evening when Algeria drew with Russia to advance to the knockout stages for the very first time. After Mekhloufi, Zitouni, Boubekeur, after Madjer, Belloumi, and Assad, Algeria have a new golden generation. And though they finally erased the handicapping memories of that injustice in 1982, fate has thrown this Algerian side a delicious curveball. 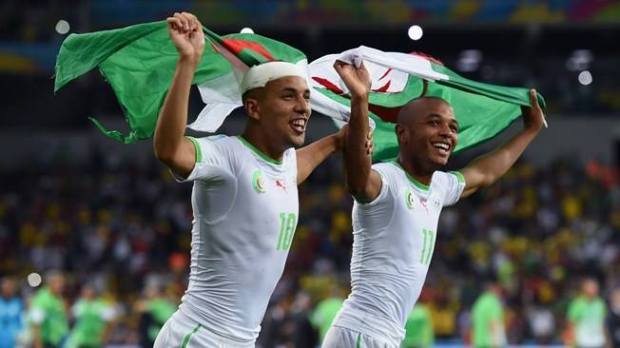 Algeria have a new golden generation

50 years after Afrique du Nord players were dismissed as not ‘veritable’ Frenchmen, the contemporary media has tagged this team, ‘France’s B team.’ 32 years after Jupp Derwall said that there was no point in studying this Algeria team. Oliver Kahn has come out blabbing, ‘Germany is superior to Algeria in all aspects. I can’t see how this team will hurt us.’ A statement of that is truly remarkable when taking into account the history of this fixture.

Today’s Algeria team should look to history as a guide for Monday’s clash. Answers to beating this German outfit lie in the white and green kit they don.

The second key will be to stay true to an attacking philosophy. As Madjer, Belloumi, Assad, and, before them, Mekhloufi, Rouai, Oudjani, played freely and with creative license; so too should Yacine Brahimi, Sofiane Feghouli, and Abdelmoumene Djabou.

Finally, a superb goalkeeping performance is in order. Boubekeur and Cerbah were two of Algeria’s greatest goalkeepers and they were both splendid against the Germans. Rais M’Bolhi is well on his way to being one of Algeria’s best ever goalkeepers, and no feat would greater solidify his rank than a stunning performance in the round of 16.

My father was 23 years old when Algeria beat West Germany in 1982. A salient image that remained with him was Derwall, the bewildered German manager, sitting in that punishing Spanish heat, murmuring, ‘I just don’t understand.’ Not giving it any attention, my old man helped his friends paint the score-line on a donkey’s side and rode the beast of burden fifteen kilometres from Constantine to Khroub as the country feted the triumph like a second independence day. He tells me that at the end of the night he found himself sitting on the edge of his bed, mimicking Derwall. His head in his hands, as he murmured, ‘I just don’t believe it.’

Football has the capacity to shock, and to confound. It’s what gives the World Cup its majesty, and it’s why no one should undervalue this cunning Algerian squad come Monday night.