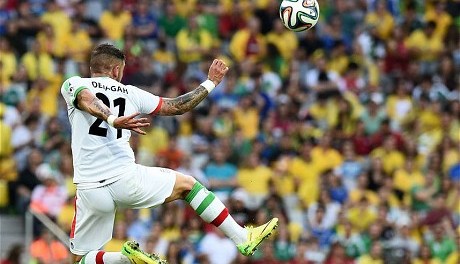 A raucous stadium welcomed the players on to the pitch in Curitiba for the second Afro-Asian tussle in the last few days, but the carnival atmosphere while never disappearing, soon gave way to some disillusionment. The fans realised they were being treated to the least exciting game of what has been a fantastic World Cup so far. Iran played no small part in ensuring this contest was stale-after all it’s the way they set up as a well disciplined team who rely on a sucker punch to floor their opponents.

Nigeria started the game at a ferocious pace, and for the first 10 or 15 minutes I was genuinely worried Iran would end up on the wrong end of a hiding, Emenike beating Hosseini for pace meant that Iran’s right flank was targeted several times. Nigeria had the ball in the net in the 7th minute, but only after Haghighi had been fouled. Thus the early pressure did not amount to anything, and instead Nigeria failed to fashion any real clear cut chances.

The half then settled into a predictable rhythm, Nigeria maintaining possession while not able to penetrate Iran’s two solid banks of four in midfield & defence. The only real threat to Haghighi during this period came from a 31st Musa free kick, which he sneakily tried to whip into the near post as everyone anticipated a cross. Haghighi reacted well to stop it. Iran meanwhile relied on the counter, pinging the ball to Ghoochannejad who at first was very isolated but was slowly found more precisely and had more impact on the game. The best chance of the half fell to Iran from their first corner in the match in the 34th minute, Dejagah crossed in and Ghoochannejad flicked a fine header on target, but Enyema was on hand to stop it with a wonderful save. The half eventually petered out.

The second half started much as the first ended, with limited action as Nigeria controlled possession. Iran were content to drop deep and looked comfortable. Queiroz was a happy man. As the half wore on, Iran became more adventurous and some well worked counter attacks resulted in Iran sending bodies forward, Dejagah’s free header miss in the 78th minute underlined the uninspiring nature of the game. Jahanbakhsh came on for Dejagah in the 78th minute but the young prospect who plays for NEC failed to make his mark on the game, which lacked an creative spark from either side.

The poorest game of the World Cup has been Asia’s most profitable, garnering a point for Iran. But after the showing against Nigeria, the weakest of the group opposition they have to play, it will take a gargantuan effort for them to progress. Another case of a West Asian side happy to keep the score low and go home with pride and honour intact then. But we can’t lament Iran too much in this affair, their lack of preparation due to an inept FA and limited European based players is a legitimate excuse.