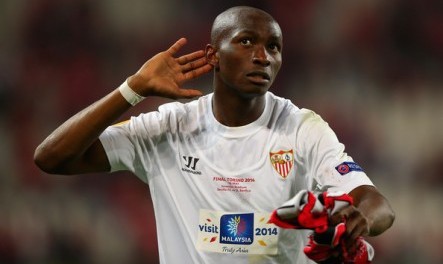 Maher Mezahi and Salim Masoud Said cherry-pick some of the outstanding African players in Europe this season. To the business at hand:

Coming in at just 5’11”, the Nigerian is short for a goalkeeper. When when you see him earn his dollars in the penalty area, though, you realise his size is not an issue.

Aged 19, he kept a clean sheet against England at the 2002 World Cup. Over the last few years, he has hit the sweet-spot of his career, with his form for Lille this season the zenith in terms of club form.

His flypaper palms and, unique for an African goalkeeper, command of his area, saw him go an incredible 1062 minutes without conceding a goal for Les Dogues.

Having endured an atrocious spell at QPR last season, which flushed away with relegation, the season-long loan move to Sevilla was meant to be nothing more than respite from the blood and thunder of the Championship.

Yet, after a bit-part start, he has ended up being a regular starter and useful addition to Sevilla, returning to London with a Europa League winner’s medal as a souvenir.

Described by Sevilla team-mates as someone who can head the ball farther than most of them can kick it, scoring the the goal that sealed the path to the final, a header in the dying minutes of injury time after Sevilla had squandered a 2-goal, first-leg lead, will give him a place in Sevilla’s history.

Enough has been written about the Toulouse defender. His all-action season, where he has played at right back, centre-back, left back (for the national team) and right midfield , as well as scoring and assisting six times, has seen five stars imprinted next to his name on scout’s notebooks. A move to a bigger club seems imminent.

When Roma cashed in on the French-born Moroccan at an apparently hefty fee of €13.5m, the figure, in some quarters, was inflationary enough to inflate cheeks with it.

In truth, accounting Benatia’s completeness as a defender and excellent consistency over the last few years, it was, even before he had set foot on the greenery where one justifies themselves, the best value for money signing this season. And he has gone on to prove that, delivering the world-class, season-after-season consistency he had shown at hidden Udinese. The Champions League awaits.

His glittering 2011-2012 season with Montpellier had appeared to be insurmountable, but the Cameroonian has, after falling out with the larger-than-life Montpellier chairman Lou Nicollin, had an even better debut season with Lyon.

In a side brimming with young talent, the peripatetic left back has had to shoulder the burden of being one of the most experienced players in the team.

Being a standard-bearer has not been a problem. He has proved to be one of the most devastating left backs in Europe in the opponent’s half, as his 10 assists show. The red-hot form has seen him, correctly, force his way into Cameroon’s starting XI.

Ogenyi Onazi has had a very solid 2013/14. Carrying on from his success with the Nigerian national team, the SS Lazio midfielder has been an all-action dynamo for the Roman outfit in midfield.

Onazi brings a generous level of energy to his side. His ubiquitous presence on the pitch lends his teammates time and space so that they can better operate in the final third.

This year, he has played 29 fixtures and scored a goal from his customary deep-lying position. Still only 21 years old, Onazi might figure on this list for many years to come.

The pettiness and ulterior motives of birthdaygate have tarnished the squeaky-clean image of the Ivorian forever.

On the pitch, he has had another excellent season. Under the management of Manuel Pellegrini, Toure has been the nucleus of a Man City team that has produced some sumptuous football, adding lethality from free-kicks, dummies and the subtleness that had diluted slightly in the latter stages of Roberto Mancini’s tenure.

Year after year, Sofiane Feghouli has ameliorated parts of his game. In 2011/12 he increased his defensive contribution, in 12/13, he began making runs into open space. This year, the Algerian ace has perfected his crossing notching, notching a career-high 10 assists.

Now 23 years of age, the Valencia midfielder is an elite midfielder. If he is to establish himself at one of the top clubs in the world, there is one last part of his game he must regulate: consistency.

To be fair to Feghouli, it hasn’t been easy at a club like Valencia where managerial changes have been the norm. But he cannot continue to have off-patches like he did during the beginning of the season.

Er Tendine (The Curtain), as Roma fans have affectionately dubbed him, has had a reversal in fortunes. A disastrous spell for Arsenal had plummeted his value and, with it, his confidence; his time at Lille completely overwritten.

Reunited at Roma with Rudi Garcia, his manager at Lille, a paternal figure and a mentor, the pacey and tricky Gervinho that was one of the most coveted wingers in the world in the summer of 2011 has been restored. His flaws remain but they have been flaws that have been embraced, allowing his confidence never to waver.

Due to scoring the majority of the initial 25 goals this season in games that were all but decided, it’s taken the Ivorian a while to receive public prominence. But after a more decisive second half of the season he has received the adulation he deseves.

His 12 goals in 2014 elevate him onto a podium with Liverpool’s deadly duo, Dean Sturridge and Luis Suarez. No one scored more goals than the trio from the turn of the year to the end of the season. And it’s not just his goal tally in a struggling side that has been impressive. His all-round play has also ignited the predatory instincts in the transfer market of bigger clubs.

The CSKA Moscow striker’s last 18 months have been hampered by a problematic  back injury, but his 18 goals in 22 games show that when he’s on the pitch there are no diminishing returns. Without him, CSKA were languishing in fifth. Once he returned, though, they went on a winning rampage that ultimately saw them crowned Russian champions.

Humility and hardwork have been the cornerstones of their triumph and in Doumbia, with that serene smile and unobtrusiveness, they have a snapshot of those virtues.

Surprisingly, despite making the provisional Ivory Coast World Cup squad, he failed to enter the final 23. Coach Sabri Lamouchi cited his back problems, but given his form at club level, no wonder he has subsequently chosen to retire from international football.