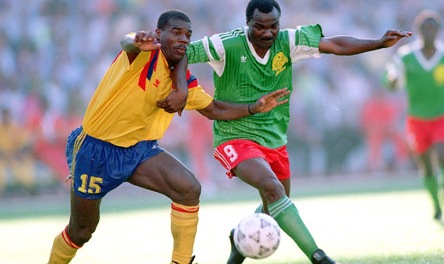 Our second instalment of the World Cup Wonders series is a shoo in. There are many footballing legends, but this particular legend is dangerously close to crossing the line where legend ends and myth begins. He captured the imagination of generations with his trademark celebration, but his goals were equally impressive. He came out of retirement at the request of his country’s president and then proceeded to dominate a tournament in which he helped his team defeat holders Argentina and an impressive Romania before making the knockout stages. I’m sure you know who we’re referring to here….Surely.

You could easily argue for Milla’s goal against Romania in the group stage of this very tournament, but we have to choose and his first goal against Colombia was a thing of beauty and hugely important as it came in extra time, paving the way for Cameroon to become the first African side ever to make the quarter final stage of the World Cup. The way he turns as he receives the ball then leaves the defender for dead before blasting the ball home, you’d think it was the start of the match and the man doing the scoring was 22, not 38. The corner flag wiggle of the hips is something Shakira herself would be proud of: