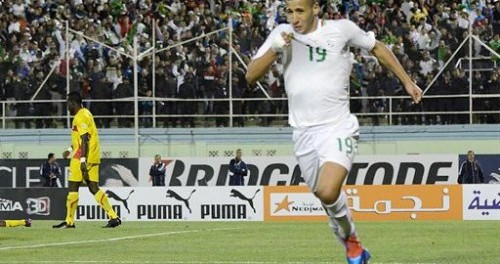 2013 was extremely kind to Saphir Taider. The Internazionale midfielder started the year as an indispensable player at Bologna where he marshalled matters in midfield. Though he isn’t particularly large in stature, Taider covers every blade of grass, imposing an auspicious physical presence. His all-action style often places him at either end of the pitch, but Taider’s skillset allows him to deputize. The spiky-haired dynamo can notch his name on the scoresheet, but can also make those important tackles. On the ball, his mature -sometimes ‘safe’- play belies his years, but connoisseurs will appreciate that metronomic aspect of his game.

Saphir-Sliti Taider emerged into the international arena in March of 2013. The general consensus on the internet fora was that he would follow in the footsteps of his older brother and represent the Carthage Eagles. So it was to much surprise when the Algerian quotidians indicated that the sly Algerian FA had convinced him to play for Les Fennecs. Allegations of bribery and corruption surfaced from sensationalist media, but Taider said that it was Mohamed Raouraoua’s ‘sporting project’ that attracted him in the country of his mother.

His impact was immediate and undeniable. Due to a host of injuries in midfield, Taider was thrust into a World Cup Qualification match against Benin, and boy, did he impress. His overall activity was too much for Benin side who were missing a midfield engine of their own: Mouritala Ogunbiyi. After putting in a complete shift, Taider drizzled honey on the zlabiya by scoring and making it 3-1; out of reach for The Squirrels of Sessegnon.

The added experience of international football seemingly made Taider an even more accomplished player. He matured into an essential cog at Bologna, and it was clear that he was at the stage in his career when a transfer would be beneficial. After purchasing the rights for his compatriot and ex-clubmate, Ishak Belfodil, Inter Milan would also bid for Saphir Taider. Initially, it was unclear where exactly Walter Mazzari intended to play him. He started some matches on the left of a 3-4-1-1, others, nestled in front of lynchpin Esteban Cambiasso. The answer is that there is no answer. Taider’s versatility is an asset that the former Napoli manager cherishes and Taider can only improve from playing different roles on the pitch.

If there’s an area where Saphir Taider can improve it is off the pitch. When it was announced that Taider would not start for Algeria in a crunch match vs. Burkina Faso, it was said that the Inter man threw a tantrum. Stories as such aren’t too worrying for players his age, but a change of attitude off the pitch could be conducive to greater improvement on it. 2014 promises to be a fruitful year for Saphir Taider. If all goes to plan, he could help Inter fight for a European slot, play in his first World Cup and establish himself as a starter in one of the world’s biggest clubs. The truth is that Algeria’s #19 has everything in his locker to be one of Africa’s best midfielders. It is now up to him to step up and fulfil his potential.