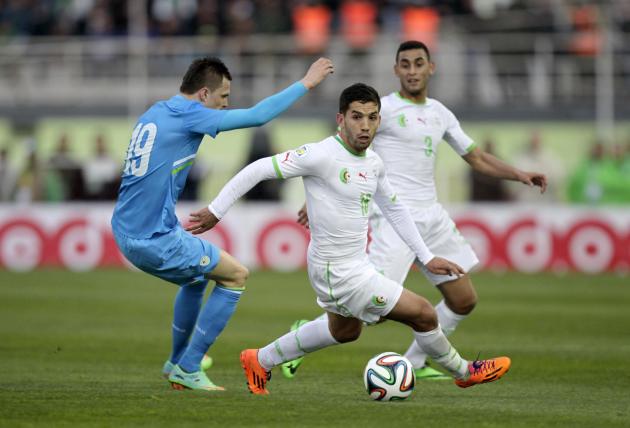 El Arbi Hillel Soudani and Saphir Taider scored on either side of half as Algeria cruised to a 2-0 win against Slovenia on Wednesday evening. Pele kicked off the evening (pardon the pun) in Blida as an honorary guest, but that was as much excitement as was produced for the first 20 minutes of the match. Algeria manufactured the first opportunity and it fell to Islam Slimani who was in on goal. The Sporting CP striker, who has been in scintillating form of late, shot right at Samir Handanovic who parried it out for a corner.

Algeria’s busiest player of the half was Abdelmoumen Djabou. Coach Vahid once called Djabou a ’10 minute player’, indicating a lack of aerobic endurance. But the impish attacking midfielder was very creative on the ball , and it was off of a foul that he won that Algeria scored their first goal. Saphir Taïder, who has become a sort of set-piece crossing specialist, poked in a cross for Soudani who put Algeria ahead. That goal was Soudani’s 10th goal in 20 matches for Algeria and he is now 10th on the all-time leading goalscorers list.

15 minutes later, Taïder would go from provider to scorer. The aforementioned Abdelmoumen Djabou wreaked havoc on Algeria’s left-flank before cutting back for the Inter midfielder who’s shot clipped the post and snuck past Samir Handanovic.

With the match slipping away from the Slovenians, Katanec threw in the big guns, bringing on Valter Birsa and Tim Matavz. But the Algerian defence held firm, conceding but a single dangerous chance when Birsa hit the post from a 20-yard strike. Madjid Bougherra, Liassine Cadamuro were faultless, if not superb. Faouzi Ghoulam occupied the left side of the pitch all on his own and stung the palms of Handanovic in the second  half.

But what was really impressive about the Algerian national team today were the performances of two debutants: Aissa Mandi and Nabil Bentaleb. Mandi did not put a foot wrong and many Algerian can attest that it was wonderful to finally see a competent right-back play his natural position (the Fennecs have played centre-halves and defensive midfielders there since 2009). As for Bentaleb, he grew into the match as Algeria got into their comfort zone. The Spurs midfielder produced two great pieces of play in the penalty box. The first was a double step-over that sent his Slovenian counterpart stumbling. The second was a clever cutback on his right foot before unleashing a venomous shot that just missed its target.

Coach Vahid will be pleased with the overall performance. The Algerians monopolized ball possession, played organized and compact defence, and successfully employed this opportunity to blood in young players. Algeria’s first preparative friendly can officially be declared a success.

Man of the Match – Abdelmoumen Djabou

The last time Djabou started for Algeria, he struggled to get into the match and resorted to hollowly carrying out his defensive duties. It was therefore imperative that he got off to a quick start on Wednesday evening and he did so, completing several dribbles in the opening stages of the match. He completed 4 dribbles (team high) and took corner kicks in an attempt to involve himself. He had a large part in orchestrating both goals and may have cemented his place in Coach Vahid’s World Cup roster with that performance.