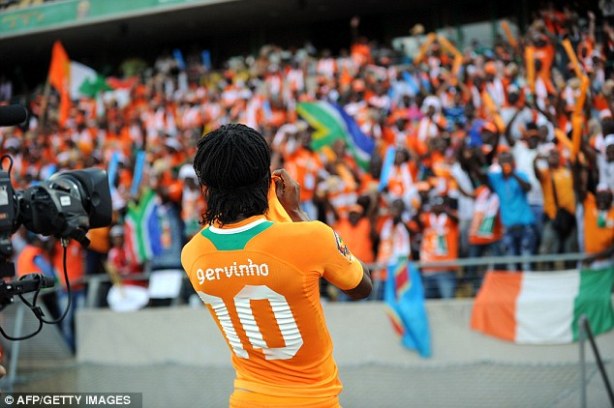 The outstanding individuals of 2013: Vincent Enyeama: When the debate of “who is the best African goalkeeper?” arose a year or so ago, discussion centred around Kossi Agassa, Itumeleng Khune, Boubacar Barry and Enyeama, with the final verdict inconclusive. But the answer, on current form, is definitely Enyeama, who also had a triumphant Afcon. The Nigerian keeper hasn’t simply been part of an impregnable Lille defence this season, but has been the outstanding member of it. His stunning shot-stopping and assured presence has ensured umpteenth clean sheets and propelled the Lille defence to an excellent one.

Serge Aurier: It says a lot about Serge Aurier that he is playing in his fifth season of professional football at the precocious age of 21. The Toulouse man has the skill and lung-power to play as a wingback, and the power and discipline to deputize at centre-half in Alain Casanova’s 3-5-2. Sabri Lamouchi and the Elephants of Cote d’Ivoire have certainly done well to secure Aurier’s services in the international arena. He has settled as a fullback on either side of a flat-back four to great effect. The future looks incredibly bright for Aurier who is surely on to bigger and better things for club and country.

Ludovic Sane: Mathematically and to the naked eye, the Bordeaux man has been a very efficient defender who has slipped under the radar; his acme a Coupe de France victory over Evian with the great Cheick Diabate. For Senegal, he has been the bastion in a defence that lacked coordination; delivering a string of performances that dripped with defiance (Liberia away in June was a particular highlight) and, ultimately, saw them agonisingly miss out on World Cup qualification.

Mehdi Benatia: In a world of football seriously lacking world class defenders that immediately spring to one’s mind, Benatia undoubtedly is; or is at least current No.1 left-field choice. A move from Udinese to Roma has finally started to give the Moroccan the adulation that he deserves, but he still isn’t getting the recognition his superb reading skills and forward dashes through the centre befit. He has been a revelation in a Roma side that sat second and unbeaten in Serie A at the halfway stage.

Pape Souare: Although he didn’t represent his nation in the diving, Senegal’s commendable performance at the London Olympics, as well as a season on loan at Stade Reims, gave the Lille left-back the springboard for success at club level. Since his return on loan he has been a model of consistency and, consequently, one of the most consistent left-backs in Ligue 1.

John Obi Mikel: The emergence of Ogenyi Onazi has finally given the Chelsea midfielder the water carrier to allow him to walk on it. The result is that the safety-first, two-yard passing we see in Chelsea colours is obliterated at international level where we see a playmaker of real pedigree. He combined the power and poise that went a long way to manhandling midfields and saw Nigeria crowned African champions.

Mohamed Aboutrika: Many local African players are often said to have ‘missed out’ on an opportunity to play in Europe. In the case of Mohamed Aboutrika, it is more the case that Europe has missed on Aboutrika than vice versa. The Al-Azhar Philosophy graduate, has capped his golden playing career with a remarkable final year of football. With Al Ahly, Aboutrika won his 5th African Champions League. He also led the continent in scoring during World Cup qualifiers. Unfortunately for Egypt, and for the world, Aboutrika won’t be gracing us with his presence this summer in Brazil. Nevertheless all of Africa salutes its son El Magico for an impactful career on and off the pitch.

Yaya Toure: The mundane methods of Mancini at Man City have been replaced by the pizzazz and pitter-patter play of Pellegrini, and the polarity in approaches is perhaps best exemplified by the change in the Ivorian’s style. Guile and brawn he has never lacked, but there has been the addition of flicks and blink-of-an-eye dummies that we never saw under the Mancini regime. And, still, there has been another addition to his repertoire: deadeye finishing from free-kicks.

Gervinho: Gervinho started 2013 mired in uncertainty. Arsenal fans had already lost patience with the Ivorian and much was expected of the braided buccaneer at the African Cup of Nations. He did not disappoint, putting in respectable performances in the first few matches. It was mainly in a fickle Emirates Stadium atmosphere that Gervinho struggled to impress. So for the rest of 2013, Gervinho was on and off: excellent with the Ivory Coast in their qualifiers, and inconsistent with Arsenal. It was only when his ex-coach Rudi Garcia brought him to Rome that we saw Gervinho really excel at the club level again. Buoyed by a renewed sense of confidence, he hasn’t looked back racking up 4 goals and 2 assists in his first 11 starts in the capital

Mohamed Salah: Another fruitful season with Basel and at international level with Egypt, finishing as Africa’s WC qualifying top scorer with 6 goals. 18 months ago he was playing for Arab Contractors, now the finest European clubs want to contract him. With the last members of Egypt’s efflorescence finished by their World Cup play-off obliteration to Ghana, the promising next generation of Egyptian players surely have their poster boy and talisman in Salah.

Pierre-Emerick Aubameyang: The accolades speak for themselves: Marc Vivien Foe Prize (Best African player in Ligue 1), a nomination alongside Zlatan Ibrahimovic, Thiago Silva and Blaise Matuidi for Ligue 1 Player of the Season and setting a Ligue 1 record by scoring in 7 consecutive games. It’s no wonder Borussia Dortmund came caling. His pace and intensity have resulted in him seamlessly consuming Dortmund’s high-octane brand of football, their second top scorer in the league at the halfway stage with 9 goals in 16 games.