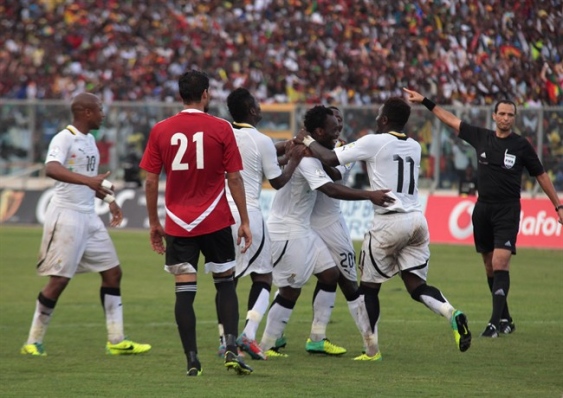 Surprise, surprise. The headline tie of the African 2014 FIFA world qualifiers, between outfits who have historically been heavyweight players in the region was won comfortably by the Ghanaians who had qualified for the two preceding World Cups, in comparison to Egypt who have continually failed to climb over the last hurdle since 1990. The real surprise though was the manner of the defeat. A 6-1 trouncing in Kumasi almost ensures Ghana’s imminent qualification unless we witness a collapse of epic proportions from the Ghanaians.

In the first leg Egypt simply couldn’t deal with the tempo, pressing and initiative the Black Stars exhibited. In Cairo, Egypt will be expected to at least appease the fans with a winning performance after their capitulation in the previous fixture, meaning they will probably like to start on the front foot and put in an attacking display. The 4-4-2 Bob Bradley employed in the friendly against Zambia indicates this. Of course a 4-4-2 formation doesn’t always lead to attacking football but in the previous leg, with the exception of Salah, the Egyptians hardly looked a threat in behind the Ghanaian defence. Bradley himself said “I included Shikabala in the Egypt line-up for the Ghana encounter to put stress on the opponent’s defence”, after Egypt had gone long periods without penetration. The use of Abou-Treika as a false nine was probably intended for the domination of possession but sometimes it can also be as crucial that the false nine is able to make runs in behind the defence in addition to dropping deep in between the lines and linking play, the most obvious case in world football being Lionel Messi (although this is a very unfair comparison) in recent years. Nagy Gedo and Amr Zaki starting as forwards should mean Egypt have a lot more attacking impetus and with Bradley having previous preference with the USA to employ a slightly narrower 4-4-2/4-2-2-2 then most national teams are accustomed to it should mean Salah and Abou-Treika have a lot of licence to roam inside and still dominate the lion share of possession against the Ghanaians.

Unlike his counterpart Bob Bradley, Appiah got his tactics spot on in the previous fixture and will probably use the exact same, if not similar, strategy in this game. Some managers would probably look to drop a striker and include an additional midfielder for an away leg of a crucial tie but with both Waris and Gyan on good form plus there being a ridiculous gap in score line both will expectedly start. The Egyptians looking to start on the front foot may play into Ghana’s hands on Tuesday night. The Black Stars have been a counter attacking team for a while and the pace of Gyan, Waris and especially Ayew could be devastating if Egypt get too many bodies forward early on although I expect for pride’s sake they might. There are however one or two issues to sort out in terms of personnel for Ghana, one of the main ones again being the keeper. Fatau Dauda was shaky when tested in Kumasi and Appiah may choose to go with Stromgodset keeper Kwarasey in between the sticks although both have been unconvincing for a while now. Harrison Afful will also be returning after suspension so Daniel Opare and Samuel Inkoom will be battling it out for the right back spot unless Appiah decides to keep Opare as a makeshift left back again for the sake of continuity. Then there’s the small case of Kevin-Prince Boateng’s return. He will most probably be sat on the bench for the start of the game but after recently being used in a wide role for Schalke he may be a surprise inclusion off the left flank in a bid to add even more countering power than previously.

As aforementioned barring one of the most significant collapses in football history happening in Cairo, Ghana have basically booked their tickets to Brazil and if the Burkinabe’s win their fixture it may be an all West African affair.