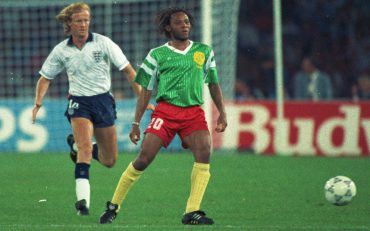 Nowadays Cyrille Makanaky fronts as a real estate agent. He shrouds himself in a normal life of anonymity and routine. Yet, as a player, his name was all but forgettable. Though never quite playing at the apex of European football, Makanaky’s memory has been engraved in the mind’s of supporters he’s blessed with his effervescent presence.

While shuttlecocking up and down the French top divisions, Makanaky managed to secure a place in Valery Nepomnyashchy’s 1990 World Cup quarter-final Cameroonian side. Following the barrier-breaking exploits attained at Italia ’90, Makanaky earned a move to Liga side Malaga CF. The fans took to his unorthodox and creative playing style. They also found his Jamaican dreadlocks and carefree demeanour endearing.

And it was in Malaga where Cyrille Makanaky first lost the identity of his last name. To this day, those who enjoy marijuana in the Andalusian city call a joint ‘A Cyrille Makanaky’. A moniker that the Cameroonian doesn’t necessarily abhor:

‘It doesn’t suprise me (the nickname) because people that have dreadlocks are often associated with drugs’, he said in an interview with SoFoot, ‘but I never smoked. Not even a cigarette.’

Makanaky and his celebrity became a global brand following his move to South America. In Chile, ‘A Makanaky’ is something completely different. It refers to being particularly apt with the opposite sex. The story behind it stemming from his travels with SC Barcelona of Ecuador. Makanaky says:

‘In our hotel, I came across Claudia Schiffer. We spoke in the elevator, but I didn’t take my clothes off or anything. People like to speculate about certain things.’

And when SC Barcelona could no longer come up with the funds to pay Makanaky’s salary, the Ecuadorian supporters speculated that he had cast some West African juju over the club. How else could one explain the string of poor results? Therefore a ‘Makanaky’ in Ecuador refers to an unbreakable curse. Makanaky’s curse continued until 2012, when SC Barcelona of Ecuador finally broke it by winning their 14th title.