In an ideal world for Didier Drogba, the so-called golden generation with sickening footprints of failure and unsustainable psychological scarring would finally win the Africa Cup of Nations in February 2015 in Morocco, with him, then aged 36, holding the trophy aloft. But such sentiments are quixotic, for sport seldom provides such ethereal Hollywood endings. Certainly, Ivory Coast coach Sabri Lamouchi has unlocked his inner Corleone to banish the man that is a national treasure from the squad to face Gambia, a first-step gesture to confirming his state as a footballing corpse.

Many would say his exclusion was deserved. Such is the reverence for him in the Ivory Coast that there had never been a cacophonous clamour for him to stand down. Before the Afcon, of course, it would have been sacrilege to suggest the Drog, the Captain, the Leader, the Legend, the Civil War-ending Hero, should be put away, but there has been a sotto voce-acceptance of his exclusion. Drogba is at the age when insipid performances that would have once been forgiven and forgotten are now interpreted as signs of the insidiousness of the dotage process. 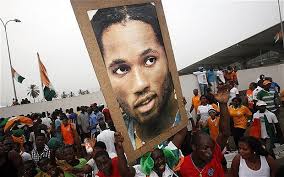 Drogba is idolized in Cote D’Ivoire

What’s more, the idolatry for him throughout the team and his monumentality makes him impossible to ignore when he is in the squad. That was certainly the case at the Afcon. The eldest member of the golden generation, there was a Do-It-For-Didier mantra flowing throughout the Ivorian set-up. Despite his indifferent performances, being dropped for the second match against Tunisia after Togo’s Vietnam-based Vincent Bossou marked him out of the opening game and his replacement, Lacina Traore, impressing, he was back for the crunch quarter-final tie against Nigeria. Although he would win a foul and subsequently assist Cheick Tiote’s equaliser, Nigeria’s callow centre-back partnership Kenneth Omeruo and Godfrey Oboabona were rarely troubled.

Merely blaming Drogba would only be a whiff of the post-mortem of the latest edition of the Ivorian Golden Generation Afcon-failing sequel. After all, it wasn’t the strikeforce that was the problem – they scored more than enough to win games – rather it was the disequilibrium in midfield and defence. Kolo Toure has since shown outstanding club form to dissipate the intermittent nanoseconds of narcolepsy that he displayed in January, Emmanuel Eboue has been dropped whilst composed left-back Siaka Tiene has lost his place due to a lengthy lack of first team football at PSG.

Drogba’s exclusion could also inspire a change of philosophy because he was not only a symbol of reverence but also one of reference. As I wrote in the Ivory Coast 2013 Cup of Nations preview: “the ex-Chelsea striker’s big-game bravura, completeness and leadership skills are crucial. Ivory Coast may have a phalanx of good and very good forwards on the bench, but their 4-3-3 system is tailored to Drogba and no other striker has shown they have the all-round attributes to replace him.”

Daddy Cool is ready to take over

My sentiments still stand. Les Elephants have myriad options to don the phosphorescent shirt, and all come with their coruscation and dimness. With 26 goals in 24 games for Vitesse Arnhem in the Eredivisie and a regular impact-stimulator from the Ivorian bench, Wilfried ‘Daddy Cool’ Bony is hitherto the most prolific of the contenders. He is endowed with the top-heaviness of Drogba and has the star aura that goes some way to filling Drogba’s spacious shoes, but tends to be lackadaisical when it comes to the hurly burly of pressing the opposition centre-backs and chasing lost causes. Wigan’s peroxide-haired Arouna Kona offers directness and intricate link-up play to function well in a front-two – which was experimented to devastating success in the 3-0 win over Austria – but isn’t the master-of-all-trades that Drogba was. Lacina Traore’s 6 foot 8 inches certainly provides instant grandeur and with 2 goals in 2 starts, as well as sharing a good understanding with Gervinho and Yaya Toure, it’s easy to understand why he has become a favourite of Lamouchi, he lacks mobility and remorseless finishing however. The dead-eyed Seydou Doumbia, fresh from a length injury lay-off that saw him miss Afcon, is next in line to the throne but he has often flattered to deceive at international level, albeit largely starting on the bench, and is more of a poacher. Turkish second division top scorer Gerard Bi Goua Gohou and Sochaux’s Giovanni Sio, both members of the 2010 Toulon Tournament Ivorian triumph, have received their first call-ups and are outsiders.

It will be interesting to see what happens from here on in until the 2014 World Cup, assuming the Ivory Coast qualify. It’s important they start preparing for a future without Drogba; including him in the upcoming squads would be more of a hindrance than help. Giving him a cooling off period, even for just the next 2-3 squads, whilst experimenting with the striking options only benefits Les Elephants in the long run.