"I am a battler, a striker who always gives 100 per cent, and puts in energy to defending as well as going forward," thus said Aristide Bance after the apogee of his career; a scintillating all-round centre-forward performance against Ghana in Wednesday's semi-final. In many ways, Bance’s self-assessment contains all the words that can be attributed to this valorous Burkina Faso side. Attribute 1: Battle. Football is like a war, there are no winners, just survivors. In stand-in captain Charles Kabore, who has assumed captaincy after the demotion of Moumouni Dagano to the bench, Florent Rouamba and Djakaridja Kone they have had trusted, fearsome foot soldiers who have offered the hybrid of destruction and control. Despite missing the first game due to suspension, Kabore has completed 157 passes in opposition territory – more than any other player in the competition. Attribute 2: Defending. Burkina Faso, with only one win in their 5 games over the course of 90 minutes, haven’t delivered the seat-squirming performances for future opponents, but they have got this far simply by being hard to beat - akin to Paraguay side that reached the 2011 Copa America final with five consecutive draws. Burkina Faso  haven’t conceded in 453 minutes from open play, since Emmanuel Emenike’s goal in the 57th minute of the opening game. Overall, the only goal they’ve conceded since that opening game came via a harshly-awarded penalty in the semi-final that was converted by Mubarak Wakaso.

Attribute 3: Energy. In their 4-0 win thrashing of Ethiopia, their fitness was stark contrast to the Walya Antelopes’ as they scored 3 goals in the final 15 minutes – despite playing with 10 men from the 60th minute after goalkeeper Abdoulaye Salama was sent off. They showed remarkable stamina to overcome Togo in extra-time in the quarter-final and looked the more dangerous side against Ghana in the semis. Not only was a legitimate goal disallowed in the latter match, but left-back Saidou Panandetiguiri, for instance, was free-wheeling down the left even when it was deep into extra time. Their endurance comes as no surprise to those who have watched their training sessions at close quarters, with a key emphasis placed on the recovery time of the players.

As the Greek adage goes: history is made by mates. In an era where club connections are more vital than ever if teams are to attain international success, it’s easy to understand why this Burkina Faso have consistently underachieved. The globe-trotting nature of their squad has undoubtedly been a hindrance when it comes to their cohesion as a team; all but six of their squad are based in France, you’ll find the rest dotted around the world, from Egypt to Moldova, from Japan to the United Arab Emirates.

The globe-trotters celebrating their penalty shootout win over Ghana.

Certainly, it was difficult to foresee their success in the tournament. It took a 96th minute goal by Alain Traore against Central African Republic to book their place; not the long-range howitzers we have become accustomed to from the young starlet either, rather a moment of madness from the CAR goalkeeper Geoffrey Lembet who came out and didn’t claim. At the 2012 Cup of Nations, they were widely tipped to progress as runners-up from group B, particularly under the guidance of the Portuguese coach Paulo ‘Mourinho of Africa’ Duarte, but they lost to Angola, Ivory Coast and Sudan; extending a winless run in the competition to 17 matches, a run that stretched back to the 1-0 win over Guinea at the 1998 Cup of Nations, which they hosted. Throw in that 16 of the 23 players that took part in the ill-fated 2012 campaign were retained for this year’s competition, then it’s logical that many predicted another Burkina fuss-o.

In short, this was a squad full of flops. Perpetually tipped as dark-horses by African football connoisseurs since 2008, the series of aforementioned disappointments diminished the pre-tournament whipping of the Stallions even by their most ardent fans.

Yet, if history is made by mates, Burkina Faso have morphed from mere team-mates to thoroughly good mates. If Belgian coach Paul Put is their caddy, then Burkina Faso have not Put-ted a hole in one, but a whole in one.”He knows how to talk to his players and he regards us all as equals,” Bance said of Put. “Even those on the bench have felt happy for our teammates. We are like a family.” Indeed, when Bance was dropped from the starting XI for the Zambia and Togo matches after poor performances and heavy criticism back home, he cut a gregarious figure on the bench; laughing and joking with team-mates.

Bance’s inclusion in the starting XI v Ghana came as a surprise, then, but he delivered the me-against-the-world performance that has had him mute the doubters and become a symbol of reverence. On Wednesday night, they were dancing in the streets of Ouagadougou and chanting Bance’s name. Kabore went one step further in his encomium of Put, “I want to take this opportunity on behalf of all the players to pay tribute to him for everything he’s brought to us and the confidence he’s given us to get us to this point.”

For Nigeria, the self-assurance of Stephen Keshi has been contagious to the rest of the team. Known as ‘Big Boss’ during his playing days, he was the leader of a group of players who would influence the tactics and team selection in the Super Eagles set up in the 1980s and 1990s. The Big Boss has shown the managerial acumen to live up to his alias. 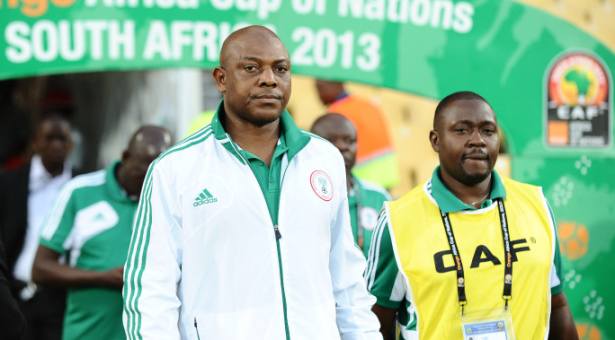 Although times have been rough and tough like leather, the Big Boss hasn’t embraced the Fist of Fury. Coming into the tournament, Keshi hadn’t won a game at Afcon despite leading Togo and Mali to the centrepiece in 2006 and 2010, respectively, bowing out in the group stages followed by swift sackings. When Nigeria drew their first two games, and Keshi had extended his Afcon winless streak to 8 games, a similar premature exit seemed to be on the cards. But if Arsene knows, then Keshi knows, and he’s known all along. He was eerily calm after the match against Zambia, not showing the flustered state of Zambia coach Herve Renard and his captain Christopher Katongo, even though he had every right to be aggrieved after Zambia equalised via a questionable awarding of a penalty and Mikel had missed a penalty.

His inaugural win in the final group match, a 2-0 win over Ethiopia which came via two late Victor Moses penalties, didn’t do much to silence the naysayers. What it did do, however, was lower the expectations going into a quarter-final against the Ivory Coast, which suited them just fine. With nothing to lose, the delivered an intrepid performance to break Ivorian hearts before their 4-1 mutilation of Mali in the semi-final.

Keshi has opted for youth over experience; plucking those with little-no footprints of the Super Eagles’ past failures and their well-documented recent nadir, when they failed to qualify for the 2012 Cup of Nations. It’s fitting, then, that the mature-head-on-young-shoulders centre-back partnership of Godfrey Oboabona and Kenneth Omeruo, 22 and 19 respectively, has been at the heart of their concretion as a team, and could be the furniture that has Nigeria set for years to come. Since their formation as a partnership –  in the second group game against Zambia when captain Joseph Yobo was unable to play due to injury – they’ve been solid; so solid that Yobo has had to settle for a place on the bench.

“4-4-2 or 4-3-3?” Keshi pondered before the Mali game. “These sorts of things are no more than map you might look at before you go out there. Once the game starts the players make decisions.” Nigeria’s strategy has been based on the pace and power of the team, granting the attacking trio the carte blanche to flick between the 4-4-2 and 4-3-3 during the course of games. Their interchangeability of their attacking three left the Mali defence disorientated in the semi-final; it was Moses down the right working Tamboura for the Echiejile’s goal, whilst for Ideye’s goal it was Emenike with a low cross down the right. For the Emenike goal against Burkina Faso in the group stages, it was through Emenike and Ideye functioning as a front two.

This is a repeat fixuture for both of these sides. The two sides met in their opening game of the Cup of Nations, an entertaining 1-1 draw, but a lot has changed since then. Burkina Faso played a more traditional 4-3-3 with three out-and-out strikers in Bance, Moumouni Dagano and Hugues-Wilfried Dah. Crucially, Charles Kabore was suspended and Prejuce Nakoulma hadn’t emerged.

For Nigeria, their attack hadn’t clicked and only John Obi Mikel remains from the three-man midfield that started in that match. More significantly, the match won’t be played at the Dakar rally-esque, continent-shaming Mbombela Stadium turf; a pitch that was understandably hard to negotiate through by both sides when they used it for the first time.

The composure on the ball and play-breaking of this duo have been integral to the structural balance of both sides. With Kabore playing just ahead of Kone and Rouamba, he’s likely to be face-to-face and Mikel in a more expressive role than the one he plays for Chelsea, we should see a fascinating battle between two individuals primed for battle.

Burkina Faso can win(g) it down the flanks

In the willowy Jonathan Pitroipa and Prejuce Nakoulma Burkina Faso have two wingers who will pose different types of problems to Nigeria, particularly with the precarious Nigerian full-backs; right-back isn’t Efe Ambrose’s primary position and Elderson Echijile has never been positionally convincing over on the left. When the teams met in the group stages, it was Pitroipa’s pizzazz which tormented the Nigerians; resulting in Ambrose’s red card and, crucially, in Alain Traore’s equaliser.

Nakoulma, meanwhile, came to the Cup of Nations as nothing more than a squad player, but the Stallions have looked far more noxious since his second-half unveiling against Togo in the quarter-finals; his combination of pace, directness and robustness grinded down the tenacious Togolese defence. As a result, he was fast-tracked to the starting XI for Wednesday night’s semi-final and he offered the same ingredients. In fact, he was very unfortunate to have a legitimate extra-time goal disallowed.

The leggy Bakary Kone has delivered good performances compared to his eyesores in last year’s competition but he remains suspect. The assuredness of Paul Koulibaly next to him will need to continue, as will the dependability of full-backs Pananditiguiri and Koffi.

There has been a lack of top quality strikers at this year’s Afcon, something Burkina Faso have benefited from. Zambia’s attack was about as effective as cotton-headed bullets and was the chief reason for their premature elimination; Ethiopia didn’t have a top class striker and lacked the physicality to cause the Burkinabes any problem; and Ghana failed to be cohesive from an attacking perspective.

Burkina Faso defence has looked worrisome against Togo, who had the quality of Emmanuel Adebayor, and Nigeria, who had the dynamism of Emenike, Musa and Ideye. Nigeria dominated proceedings for much of the previous meeting between these two sides, and should have been out of sight before an added-time equaliser by Alain Traore. Whilst the bulky Emenike is a major doubt, Nigeria still have Moses and Ideye, and plenty of firepower to call upon in Ahmed Musa and Ikechukwu Uche should the Spartak Moscow striker fail to make it.