by Maher Mezahi and Sam Crocker Ivory Coast 1-2 Nigeria We could tell you that it was supposed to be their year. We could tell you they were desperately unlucky in last January’s final, when the Elephants crashed out without conceding a single goal. We could tell you ’13 was supposed to be ironically lucky. That Lamouchi’s men had come into the Cup of Nations on a 22 match undefeated run. But you’ll read that elsewhere; instead, let’s give credit to Stephen Keshi and the Nigerian Super Eagles for turning in a spectacular performance. Here’s how they did it: Tactical set-up Keshi fortified his reputation of unpredictability when leaving Ahmed Musa out of the line-up. Musa, not unlike his trans-linguistic namesake Moses, nearly single-handedly salvaged a point in an earlier match. He was expected to start, but only the unexpected is to be expected with Stephen Keshi at the helm. The appropriately named Sunday Mba got his week off to a good start as he was pencilled in Musa’s stead. Keshi’s Franco-Tunisian counterpart made a host of changes to his line-up as a makeshift squad were carted out against Algeria. 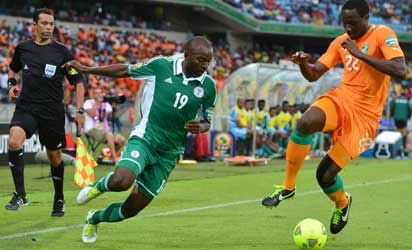 Sunday Mba was brought in by Keshi

The opening 25 minutes were played at a pedestrian rhythm as neither side wanted to open up in what proved to be a cagey affair. Although Victor Moses’ activity on the left flank was worth noting as he persistently sent Emmanuel Eboue signals of intent. The first real goal scoring opportunity of the match fell to the bullish Emmanuel Emenike in the 27th minute, but the CSKA Moskva striker disappointingly shot high and wide. Unconfirmed reports claim the ball has just landed in Lagos. The bad miss did not deter Emenike as his determination shone through the banality in Rustenberg. Breakthrough came right before halftime as the oft-mentioned Emenike turned Ndri Romaric and won a foul. John Obi Mikel toed the indirect free-kick onto the path of the onrushing Emenike who put his foot through the ball with the force of a locomotive train. The knuckleball changed its trajectory half a dozen times before zooming passed Boubacar Barry and into the Ivorian net. Nigeria took a deserved lead into half-time.

Sabri Lamouchi ensured his men emerged from the tunnel with ants in their pants. Salomon Kalou and Didier Drogba combined to produce a close shot in the first minute. Didier Drogba looked especially determined as he won corners and throw-ins. In the 50th minute, his persistence paid off. Drogba cleverly nutmegged Efe Ambrose before tumbling over an invisible challenge. The Shanghai Shenhua/Galatasaray man conned the red into awarding a free-kick on the edge of the area. We can take nothing from Drogba’s set-piece delivery though as he placed it right on Tiote’s head. 1-1.

Instead of pressing on, Cote d’Ivoire climbed back into their shells of complacency and the match slowed. Nigeria’s front 4 continued to buzz around for an opportunity and salvation finally came in the form of Sunday Mba. Mba, one of six players representing the Nigerian Premier League, showcased his long-legged skill as he pipped past a couple of players and hit a prayer; one that inappropriately hit the backside of Sol Bamba and trumped Boubacar Barry.

The remaining 15 minutes flew by and the Ivory Coast, once more, found themselves in familiar territory. Some cried, some looked forlorn, others grimaced. All knew that this was their final opportunity for the Drogba and co’s Golden Generation to win something together. A chapter of African football ends unfulfilled, but the rest of Africa still salutes one of the the continent’s most talented sides ever.

Man of the Match: Emmanuel Emenike

Emenike is starting to make a celebratory name for himself. He was a constant thorn in the Ivorians side, battling for every inch of turf surrendered to him. He won free-kick after free-kick which drastically improved field position. If he can interpolate finesse, he will soon join the top bracket of strikers worldwide.

In a tentative game that largely failed to inspire, it required the cruel beast that is extra-time to eventually separate these two teams, as Burkina Faso’s Jonathan Pitroipa got the vital goal 15 minutes from time to kill the game.

Livelier than a number of the games witnessed thus far in the competition, the minimal time the ball spent in the air will have been pleasing to see for most of the viewers of this game, as each team chose pace and skill over power and aerial prowess to beat their opposition. Burkina Faso were arguably the dominant side, patiently building up their attacking moves with some nice, expansive passing from one side of the pitch to the other, utilizing the impressive Jonathan Pitroipa at every opportunity to break down the sturdy Togo defence.

Indeed, despite the terrible condition of the pitch, the plan to keep it on the floor was perhaps an unexpected plan for viewers, with conditions almost permitting the more direct game that had been used for most of the tournament up until now. It was lovely to watch however, as Burkina Faso worked it around the pitch, Kabore dictating the tempo of the passing for his country. Sanou and Outtara looked lively on either side of the pitch, giving Burkina Faso a lovely zing to their play as the pair plus Pitroipa attempted to create themselves opporunities.

It was Togo who had most certainly the best chance of the half, however. One of the rare times they constructed their attacking move well and built up the play, from a team who had largely sat back and relied on hitting Burkina Faso on the break, a lovely move almost yielded a lead on 17 minutes. Working it from the halfway line, a one-two on the edge of the box gave Gakpe space to cut it across to Ayite, but the bobbling ball on the pitch that was 90% sand meant that he could only scuff it into the ground to allow Diakite to catch comfortably.

Burkina Faso did make more chances overall however. Good work from Outarra getting to the byline almost created a chance for Sanou had the cross not been too long, and then swapped roles later on, Sanou turning provider as Outarrra headed just wide. Togo stood firm however, showing relatively little ambition to commit too many players forward, willing to sit back and let their opposition come at them in order to hit them on the counter. Burkina Faso seemed to be aware of this, as the fullbacks Koffi and Pananderiguri seemed cautious with their overlapping, with the consequential lack of chances meaning that the first half was largely restricted to long-shots from either side.

The second half started off in extremely exciting fashion. After an excellent run from Ayite to open up Burkina Faso, Gakpe swung in a cross for Adebayor which just tempted Diakite enough for him to fly out of goal. Adebayor for there first, but Pananderiguri had the presence of mind to go behind his keeper, as he cleared it off the line just-in-time.

However, it’s safe to say the 2nd half did not remain like this. With neither team really committing enough players forward, nor the pitch cutting up further, the game descended into scrappiness. Togo had the best chances – Bossou heading over from a free header and Adebayor stretching his legs to beat several Burkina Faso players but could not dink it over the advanced Diakite. Prejuice Nakoumma’s introduction for Burkina Faso livened things up as he caused chaos down the left, denied an absolutely nailed-on penalty when he got in a tangle of legs with Bossou, but the referee (who had not had the greatest of games) did not see what everyone else saw.

Onto extra-time it was, and it appeared not much had changed. Whether it was the two sides balancing one another out or Mark Bright’s theory about running on beaches being more tiring (due to the quantity of sand on the pitch), the quality of the game continued to descend as it had done since half-time. With the even cruel fate of penalties seemingly inevitable, in the 105th minute the deadlock was finally broken.

Jonathan Pitroipa, completely unmarked, nodded in a corner with just 15 minutes remaining in extra time. Though renowned for his superb dribbling ability and frequence of chances that are created, it was in fact the other end of his body which did the damage, as he was not tended to by what had been a very thorough Togo defence to eventually send Burkina Faso through.

It was a sad end for Togo. Both being the teams that surprised people by getting through the group, it would be an undeserved end for whoever went out, and after a match where they had the better chances they must be thinking how it could have been different. As for Burkina Faso, they will fancy their chances against a Ghana side who did not look too steady when up against the Cape Verde, and on a decent pitch they have every chance of getting to the final. Their defence was very diligent tonight, marking Adebayor largely out of the game, as well as possessing a midfield able to dictate the tempo and control the game as they did tonight.

Man of the match: Paul Koulibaly

Forming an excellent partnership with Bakary Kone, Koulibaly had the unenviable task of marking Adebayor tonight, and largely managed to keep him quiet. With Gakpe and Ayite creating plenty to cause problems with their pace on the break, Koulibaly stuck to his task well, with their rearguard action keeping Burkina Faso in the game to mean that Pitroipa’s goal would be the one to send them through.