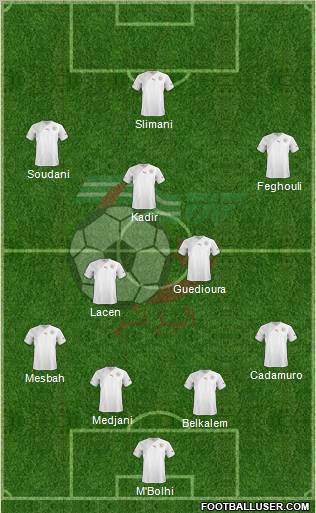 As Hamlet played the part, and spun folly, Polonius finally acknowledged that there was indeed method to his madness. This last year of observing Vahid Halilhodzic as caretaker of the Algerian national team has seen me sympathize with Ophelia’s father. I have inspected the Bosnian’s work and yet all he seemed to produce were arbitrary spells of entropy, lacking any real order or logical conclusion. But I find that one does his best thinking in the shower - an assertion Archimedes will reinforce. So as I recoiled from the first jettisons of icy water (old water heater), my Eureka moment came. To the benefit of my picket-fence neighbours, I didn’t run naked in the streets announcing my discovery. Instead, my laptop's chiclet keys endured brunt of my excitement which I now share with you.

Clearing Out the General

In France, Coach Vahid is known to be of the eccentric variety. His reputation stems from erratic absolutist tendencies. Like most great coaches, Vahid wants demands the prerogative of overseeing all aspects of his operation. Vahid wants to be pilot, co-pilot and air control. His players, like passengers, should have no say on how the plane is flown, or which route is taken. To assume a monopoly, Halilhodzic needed to shock the nation. It was, then, fitting that Vahid’s first line of action was dropping Algeria’s general (no, not Toufik): Karim Ziani. Throughout his career, the pixie-sized magician, whose mother is French, had always put Algeria first. He put it on himself to spearhead a golden generation of stars who put Algeria back on the map - and the nation still adores him because of it. Ziani and his troupe became legitimate national heroes and had attained near-invincible status. Removing Ziani was, therefore, more symbolic than tactical. Exiling Ziani was Vahid’s way of sending a message of intent. He was the undisputed leader of this new national team and there were no favourites, only pawns executing his gameplan.

Out With the Old, In With the New

Other pillars of the previous golden generation quickly followed Ziani out the door. Karim Matmour, Nadir Belhadj and Anthar Yahia retired from international football. Others like Mourad Meghni, Djamel Abdoun, and Kader Ghezzal were simply shut out.

With the old guard left behind, Vahid called up Sofiane Feghouli, who has since been in magnificent form for club and country. Carl Medjani, Djamel Mesbah, Hilel Soudani, Islam Slimani and Adlene Guedioura are players that grew into the new-look squad and became essential cogs for Coach Vahid’s Algerian machine.

The goldenboys were not the only thing Vahid rid the team of. Gone were the antics of defending a deep line and relying on set-pieces for three points. Algeria implemented an exciting new approach which entailed high pressing, quick tempo and fluid interplay among midfielders. The results were instantaneous as Algeria easily qualified for the 2013 AFCON; brushing aside tricky Gambia and coolly executing against fiery North African neighbours Libya.

A tough, tow-headed and controlling tactician. He is always on edge and clings to manic paranoia about the press and his players. Yet there seems to be some method to his madness as he has been invariably successful wherever his ventures land him.

Soudani has really come into his own under Vahid Halilhodzic. The Vitoria Guimares striker sports a scintillating scoring record under the Bosnian: six goals in seven games. Soudani starts on the left wing of a 4-3-3. From the perimeter Soudani utilizes his power and remarkable leaping ability to capitalize on the mismatch against smaller fullbacks to score at the far post. Feghouli and Kadir are usually whipping in delightfully tempting crosses.

Since his initial call-up in early 2012, Sofiane Feghouli has blossomed into one of the Africa’s most exciting players. Feghouli accurately exemplifies the fine details of Vahid Halilhodzic’s philosophy. He executes defensive responsibilities but manages to create a vast number of goals and assists.