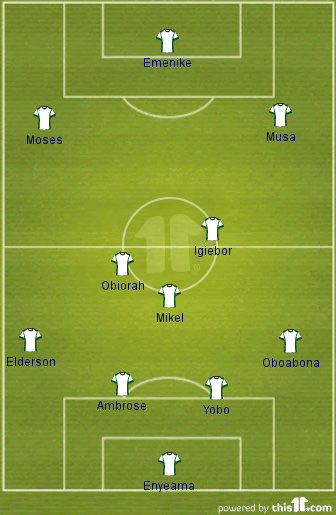 After disappointing third place finishes in 2002, 2004, 2006 and 2010 and reaching a nadir when failing to reach the 2012 edition, Nigeria return to the Cup of Nations with a mix of quiet optimism and a dilution of self-entitlement. Coach Steve Keshi, a stalwart in their late 80s/early 90s heyday when they played with an irresistible fusion of brain and brawn, has reverted back to the foundations that saw the original 'Green Eagles' sobriquet give way to the 'Super Eagles' when they started decimating all-comers. It’s nearly 20 years since Nigeria won the Cup of Nations. But after their consistent failures in the Cup of Nations and underwhelming performances in the World Cup, there has been a swift transformation in mantra. Indeed, Keshi is not doing what his predecessors have done: he is not relying entirely on household-name foreign-based players to win him games. Instead, he has constructed a squad which has a noticeable presence from the domestic league – six players - and then added a smattering of in-form foreign-based players, favouring a young generation with near unblemished footprints of Nigeria’s consistent failures. His slight focus on domestic-based players begs the, albeit minor, question: is the standard of players plucked from the Nigerian league of adequate enough quality to meet the grandiose expectations of its fans? Put simply, no. The likes of Tunisia, Egypt and Zambia have, of course, provided the antidote to the Cameroon teams that triumphed in 2000 and 2002 with entirely European-based squads.  But Tunisia had well-rounded teams which regularly challenged in latter stages of African continental competitions; Egypt plucked the majority of their team from the all-conquering Al Ahly team of the 2000s and a very good Zamalek side; and Zambia had a core of individuals from TP Mazembe and a very well-run and strong South African league.

As a by-product of Keshi’s methodology, even the most hardcore connoisseur of world football would be unable to recognise the majority of the names in the squad. The polarising figure that is John Obi Mikel is the most famous name and he plays in a similar role to the one he plays for Chelsea – he sits in front of the defence and leaves the creativity to others. Mikel is accompanied in midfield by the more creative Nosa Igiebor, whose intelligence and ability on the ball makes him a sure starter, and then one of Nwankwo Obiorah, Fengor Ogude or the highly-rated Ogenyi Onazi.

Who will start as Nigeria’s number one remains a debate. The experienced Vincent Enyeama has been one of Nigeria’s reliable keepers in recent years but error-ridden performances, and his understudy Austin Ejide’s assured displays in recent friendlies against Venezuela and Catalonia, has led to calls for him to be dropped. The key component of the backline is captain Joseph Yobo, and he is partnered by the tenacious Celtic centre-back Efe Ambrose.

Nigeria have a major migraine at right back. Godfrey Oboabona, a mature-head-on-young-shoulders defender who is primarily a centre-back, will probably start there, and Ambrose has been played there. The only specialist right-back is Chelsea youngster Kenneth Omeruo but he only has one cap to his name. You could quip that Nigeria also lack a specialist left-back; after all, Elderson’s game is filled with positional errors.

The front three give you what a stereotypical Nigerian strikeforce ought to give you: pace, penetration, power, trickery and goals. Emmanuel Emenike leads the line and will be supported from either side by Victor Moses and Ahmed Musa. If this front three click then the Super Eagles could go very far. With their second group match against Zambia most likely determining their fate and who, potentially, avoids the Ivory Coast, the front three will have to be on the top of their games to penetrate through an intransigent Zambian defence. Nigeria have further gusto in attack as they’re able to call on Villareal’s Ikechukwu Uche, who has 18 goals in 40 games for the Super Eagles and is the most nimble and technically-gifted out of the strikers, and the powerfully-built Dinamo Kiev forward Brown Ideye.

Just happy to be here?

Despite the humbling experience of missing last time out, the magnitude of the game in Nigeria  means their fans are unlikely to be content with mere qualification. The reaction to yesterday’s bone-chilling 0-0 warm-up friendly against Cape Verde provided a microcosm of Nigerian fans’ aspirations. Aesthetically-pleasing, coherent football would be ideal and, more imperatively, results. They are in a group where they can make an impact considering the out-of-sorts Zambia side, a Burkina Faso team which often flatters to deceive and an Ethiopia side which they should be able to beat. But one would have to favour the long-term experience of Zambia when it comes to getting their act together. Burkina Faso, for all their inconsistency, have more experience in their ranks. Ethiopia were minutes away from a famous win over the Super Eagles before Yobo salvaged a 2-2 draw during 2012 Cup of Nations qualifying.

If they qualify, they will probably face Ivory Coast, Algeria or Tunisia – three of the most complete teams in the tournament. Enyeama, Yobo and Mikel are experienced names but will the supporting cast’s young shoulders dislocate under the weight of expectations? 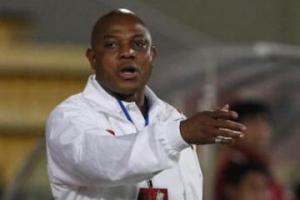 Known as ‘Big Boss’ during his playing days, he was the leader of a group of players who would influence the tactics and team selection in the Super Eagles set up in the 1980s and 1990s. He skippered Nigeria to the 1994 Cup of Nations triumph and came on as a substitute in the final when they won it for the first time in 1980. He is one of the few top African ex-footballers who has successfully made the transition into coaching.

While his commitment to the cause been questioned in the past, the Chelsea defensive midfielder’s importance to the Super Eagles is unquestionable. Without him, the defence lacks the sufficient protection and the midfield looks ridiculously easy to bypass.

One to watch: Nosa Igiebor

Flair, appreciation of space and goals – just three of the virtues Igiebor brings to the table, but I could go on as he brings so much more. ‘All-action’ would be the best way to describe him, a Nigerian midfield lacks impetus without the Real Betis midfielder.