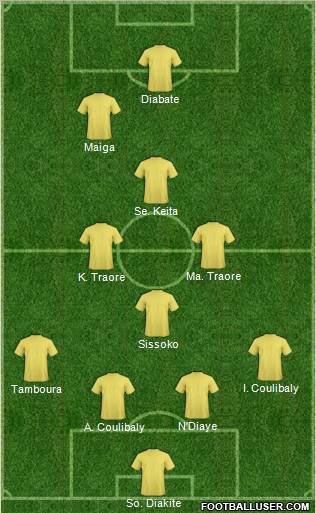 Until recently, it couldn’t have been much fun supporting Les Aigles. Some of Africa’s best and brightest hail from Mali but rarely have they ever been assembled as an oiled, coherent, well-functioning unit.

Take the 2010 African Cup of Nations. Nigerian icon Stephen Keshi took a squad peppered with household names: Seydou Keita, Frederic Kanoute, Momo Sissoko and Mahamadou Diarra were all in Angola ready to defend the green, red and yellow. In their memorable opening match, Mali mounted a late surge, scoring four goals in quick succession to salvage a point from the clutches of a four goal deficit. Their comeback predictably coincided with the introduction of Frederic Kanoute and Seydou Keita. The duo scored three of Mali’s four goals, as they were bizarrely left out for the then inexperienced Maiga and stale Bagayoko.

Under the tutelage of Alain Giresse, Mali began gaining measurable traction. The tested Frenchman took a few steps to rejuvenate his squad. First plan of action? Recruitment. In came leggy Sidy Kone from Lyon, QPR’s Samba Diakite and the massive Tongo Doumbia - now plying his trade in the midlands for Wolverhampton Wanderers. Giresse also scoured the Malien Premiere Division for reinforcements which he found in Djoliba’s Idrissa Traore and Salif Coulibaly. The final chapter consisted of extracting the maximum from an experienced core which constituted the Malian spine. Seydou Keita is the heartbeat of the side. Mali will always set-up with a bruiser alongside the former Barcelona midfielder. This emancipates Keita from his defensive duties and gives him licence to dictate attacks. Bakaye Traore, Momo Sissoko, Kalilou Traore and - recently - Mahamadou Diarra have all played the holding role with much success.

Off the Pitch Troubles

Off the pitch, the country is being torn apart. Indigenous peoples near the Sahara have splintered off, pushing for self-determination. The Tuareg of Azawad are now, allegedly, led by an Al-Qaeda surrogate group and look increasingly likely to form a regional government, repelling Western intervention, and, effectively, splitting the nation into two. The political turbulence has forced Mali to play their qualification matches on neutral pitches - it could provide a distraction or serve as motivation for the tournament.

The appointment of Alain Giresse in 2010 was met with jubilation and rightly so. The former French midfielder is a proven name in Africa. Under his wing, Mali stepped out from under their inflated exoskeleton and made substantial improvements. A bronze medal at the 2012 African Cup of Nations was the country’s best finish since 1972. Giresse looked to continue his work with Les Aigles, and he was offered a bumper extension but to no avail. The Frenchman could simply no longer sustain the unbearable work conditions set by the Malian Football Association.

Carteron had spent 3 years at Dijon, both promoting the club and relegating it. Mali represented a fresh challenge and it was one Carteron seized with both hands. Carteron can be praised for his adaptability, as he moulded his philosophies to the team’s strengths. He mostly employs the out-of-style 4-4-2 to accommodate his striking options. Modibo Maiga and Cheikh Diabate have formed a dynamic duo – one of them scoring in every game this year. Mamadou Samassa and Mustapha Yatabare are more than capable replacements for either of the two. Yet Carteron isn’t afraid to opt for a 4-3-3 when necessary. When Mali took on Algeria in Ouagadougou, Carteron lined up a 4-5-1. Overloading the midfield cut out the spaces Algeria’s attacking midfield tends to exploit. Sofiane Feghouli and Ryad Boudebouz were closed down by the likes of Seydou Keita, Kalilou Traore and Samba Sow.

One To Watch: Modibo Maiga

Failure to find form under Sam Allardyce has surely irritated Modibo Maiga. Reports have already surfaced, linking him back to French giants Marseille. Maiga will have everything to prove in South Africa and the Malian usually hits form when he plays with a chip on his shoulder. Look for him to terrorize defences as Mali attempt to improve on last year’s 3rd place finish.

For certain players, age, form, and personal issues are irrelevant factors, especially in international tournaments. Experience, symbolic worth and sheer skill envelope any outstanding negatives and render said players invaluable. Seydou Keita is that player for Mali. Keita has spent the last few months of his career in the Far East playing for Dalian Aerbin. When the Chinese league came to a close, he phoned Tito Vilanova asking him for permission to train with his former club. Vilanova allowed it, which should see Keita head to South Africa fighting fit.