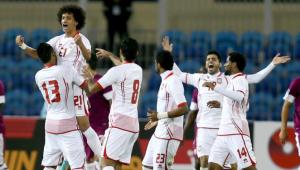 With the 21st edition of  the Gulf Cup kicking off on Saturday, it wasn't hosts Bahrain who grabbed the headlines - they played out a laboriously painful scoreless draw with Oman - but rather the UAE who thumped a Qatar outfit still in with a shout of making Brazil 2014, 3-1 with a head-turning display, full of exquisite touches, artistry and a free kick as good as you'll see in any level of football. A seemingly innocuous looking result to the untrained eye, but consider this, the UAE had not beaten neighbours Qatar since 2007 in an International match, a fact which mirrors the decline their national side has seen over the last half decade. A disastrous exit from the 2011 Asian Cup with one point and having scored no goals,  the UAE then crashed out of the 2014 World Cup qualifiers early on, in the AFC 3rd Round of Qualification with a miserable record having lost 5 games and won just one in their group.

As is customary amongst the football associations of  the Gulf states, a knee jerk reaction saw Slovenian manager Srečko Katanec replaced by Abdullah Masfar after they lost their opening two games of that round, but to little avail. The local coach was unable to work any magic and their dream of making the beaches of Rio in 2014 was shattered before many nations had even competed in a World Cup qualifier. Much was made of the demise of Al Abyadh, the Euphoria of the 2007 maiden Gulf Cup crown was a dim and distant memory, the future seemed bleak.

But soon murmurings of a golden generation began to spread, could there be a revival of fortune for the men in white? Who was the architect of this? Whispered exchanges in coffee shops & malls were beginning to turn to palpable excitement and anticipation. But how?

The awaited Mahdi…or so the case may be for Emirati fans. A local coach through and through, having plied his trade solely in his homeland, he harbours a rather undistinguished playing career and no real managing career to speak of. Taking over the management of the UAE U19 side in 2008 after a short stint as assistant to the U16 side in 2003, and aside from two minor spells as manager of Al Ahli and caretaker manager at Baniyas has no other managerial experience other than his first managerial duty, which involved training the U10 side of Al Ahli. The cap-donning manager is a quiet man and prefers to stay out of the limelight, choosing to take his boys on camps further afield to avoid the overbearing glare of the cameras. The media in the Arab world can be just as unforgiving as anywhere else when it comes to football and the manager has no desire for his starlets to be sidetracked by this: “We have tried to avoid media attention and it allowed the team to stay fully focused on the task at hand.”

His impression on the U19 squad was immediate, he led his charges to a spectacular victory of the 2008 AFC U19 Championship the very year he took over. The countries first ever win at that level, and did so sweeping aside teams such as South Korea (then 11  times champions) and Iraq (5 times champions), along with hosts Saudi. But it didn’t stop there, next up was the 2009 Fifa U20 World Cup in Egypt. Again, his side was impressive and came second in their group, the went on to beat Venezuela in the last 16 before going out valiantly against Costa Rica in the quarter finals-equalling their best finish at the 2003 finals hosted in the UAE itself. He built a rapport with his players which saw him extract the best out of them on the field: “Coaching is human development; as a coach you are managing employees and trying to achieve goals. You are a director trying to take the maximum output from your employees.”

But he got the results through nurturing the players through friendship and trust, as the players themselves testify: “Mahdi Ali,off the field, he is your father, brother, he will sit with us and we play cards, we joke. But on the field, he is very serious and I am scared of him on the field,” said Mohammed Ahmed of Al Ain and current national team player. With that the successes kept coming and a year later it was the Asian Games, and this time it was silver, falling in the final to Japan, yet again it was a record best performance for the country at the games.

So it was no great surprise to see the very same team make the London 2012 Olympics, where they played in a group which included hosts GB, Uruguay and Senegal. During that summer they captured many peoples hearts and imaginations. Their open style of play; the way the players expressed themselves on the ball was infectious. A style which is an amalgamation of the Barcelona style of play, Mahdi’s reverence of Arsenal manager Arsene Wenger and the local Arab passion for flair, it is a throwback to the days when football was pure and a far cry from the regimented discipline which can stifle many players and thus modern day tournaments.

The downside of course is the back line being exposed, and while they won the admiration of many they exited the tournament after 2 losses and a draw. However, young stars in the making such as Omar Abdulrahman were able to shine amongst the likes of Uruguay’s Suarez. Giggs is said to have made a point of chatting with the talented youngster in his dressing room after their game and Micah Richards heaped praise on him:  “The No 15 is a very good player who plays beautiful football, he’ll be one of those players we should keep an eye on in the future.” But Omar, who is aged 21, is one of many, and Mahdi’s starting XI against Qatar in the Gulf Cup opener was solely comprised of players under the age of 25, Ali Mabkhout is 22, goalkeeper Ali Khasif is 25, and the veteran of the side who came off the bench today was Ismail Matar, at the grand old age of 29.

This story bears many resemblances to Iraq’s rise under the much lauded local coach Adnan Hamed. That one ended with Iraq’s well known win at the Asian Cup in 2007. But this UAE side has distinct advantages, namely a professional league and stability. They could go far.

This team may not win the 2013 Gulf Cup, and if Mahdi’s statements are to be believed, that is not their aim: “Frankly, winning the Gulf Cup was not one of our priorities.” But we’ll be keeping a close eye on Al Abiadh’s development during this tournament and beyond, in the more important matter of the Asian Cup 2015 Qualifiers and beyond to the Russia 2018 World Cup Qualifiers. If the successes continue to pour in like they have, we may well be seeing this promising set of youngsters maturing and causing upsets  at those major tournaments, led, of course, by Mahdi Ali.