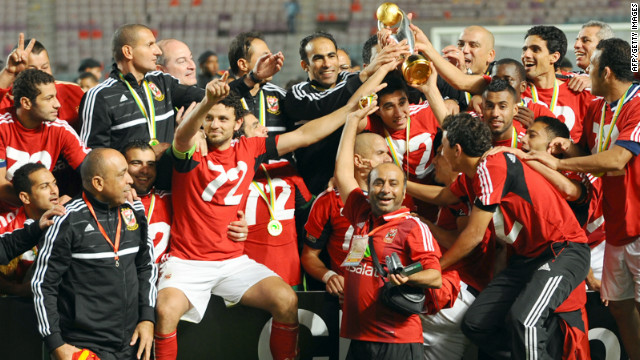 Al Ahly gave an excellent performance to overpower Esperance, and inflict their first home defeat in the Champions League since losing to Zamalek in August 2005. Al Ahly coach Hossam Al Badry gave Al Sayed Hamdy a start up front after his impressive cameo in the first leg where he scored the all-important equaliser. Hamdy’s place in the team came at the cost of veteran midfielder Mohamed Aboutrika, which hinted Al Ahly were looking for the prolonging of the urgency in the final third that was evident after Hamdy came on in the first leg. Ahmed Shedid returned at left-back in place of Sherif Abdel-Fadil after missing the first leg through injury. Esperance coach Nabil Maaloul, meanwhile, surprisingly started with talisman Youssef Msakni, even though the 22-year-old was a major doubt following an appendectomy, and Chaker Zouaghi came in for the suspended Sameh Derbali at right-back.

Ragued pressing on Houcine and co. by Al Ahly

The most interesting feature of the game was Al Ahly’s work ethic in pressing the Esperance backline, as well as the double-pivot shielding it, high in the first half. On the whole, Esperance looked unsettled, nervous and uncomfortable and couldn’t establish the rhythm that is usually pivotal for home sides in games of such magnitude. Despite the quality in their ranks, their inability to establish a rhythm came as no surprise; after all, Esperance’s visitors in the CL this season have been content with sitting back, so the Blood and Gold usually have plenty of time to knock the ball across their backline lackadaisically and generally play to their own terms.

The shield of the back four, Houcine Ragued, and the tempo-setter – and arguably the most important player in the Esperance team – Khaled Mouelhi were barely allowed any time on this occasion, however. The pressing of this double-pivot resulted in a fast-paced and scrappy midfield battle, and Esperance didn’t have the system or energy in midfield to cope with it.

Zouaghi, who came in for suspended right-back Derbali, was barely given time to get comfortable and ease himself into the game. Most significantly, the towering centre-back Walid Hichri was also pressed and his off-the-radar passing consistently gifted the ball back to Al Ahly, resulting in the second goal by Walid Soliman.

While Esperance had the most well-assembled defensive structure in the tournament, there had always been question marks about the mobility of their centre-halves, particularly Hicheri. In matches where sides resorted to long balls or lacked guile in midfield, their centre-backs were rarely given the sort of stiff all-round tests that prompt defenders to retire to bed early after the match.

But there had been whiffs of a weakness along the ground. For example, Sunshine Stars’ Izu Azuka – a diminutive and tricky but not overly skilful player – gave them myriad problems during the group stages. So good was the Nigerian against the Tunisians that they raided Sunshine Stars for his services so they won’t have to face him again.

Al Hamdy’s starting ahead of Aboutrika justly raised eyebrows, even though Al Hamdy had scored the equaliser in the second leg and Al Ahly had looked more incisive with him in the team in the first leg. After all, Aboutrika is a man for the big occasion and has scored more final goals than most of us have seen Lee Cattermole get sent off.

Hamdy had completely justified his selection by half-time, not only had he caused constant problems but his evasion of Hichri down the left and cut-back for Gedo’s goal had, crucially, cancelled Esperance’s away goal. His dynamism to play through the centre or on the wing was coherent with the attacking players alongside him and made Al Ahly’s juggernaut of ceaseless interchanging even more mind-boggling for defenders. Indeed, Gedo played through the centre and had shifts on the left wing; Soliman started on the left wing and moved to the right wing during the second half of the first half; and Hamdy did the opposite of Soliman but could also be seen through the middle. Aboutrika, as good as he is, is a playmaker and would have been unable to press and play on the wings as well as Hamdy did.

With the Esperance midfield unable to assert themselves on the game, every ball was hopefully launched to the big centre-forward Yannick N’Djeng, who, for the majority of the two legs, was consummately dealt with by Wael Gomaa.

Being devoid of the economical runs of Afful and Derbali made Esperance one-dimensional. All was left to Msakni to conjure something, but the 22-year-old still seemed to still be carrying the wounds of the appendectomy. He drifted in and out of the game and wasn’t anywhere near his usual self, his movement rendered to the rigidity of a robot.

Esperance pushed up higher in the second half and Yannick N’Djeng was surrounded with more men, but it was too little too late. Collective assuredness of the ball was ubiquitous in the Al Ahly team and with more space to operate in, it was only a matter of when before they scored the clincher.

Al Ahly were the better side by a considerable distance over the course of two legs. There was no hint of cautiousness – gven the state of their defence, this was a right move – from the all-conquering Egyptians as Al Badry aptly won his first away game as Al Ahly coach. The inclusion of Al Sayed Hamdy made the quick-quick passing even quicker and the high pressing transformed what was supposed to be a celebratory tea party for Esperance into another night of heartache. More pain is pounded into the hearts of Esperance (4 CL finals lost in 13 years now), while Al Ahly increase their continental eminence (5 CL titles in 12 years, 7 in total) during what has been a tumultuous time for the club, Egyptian football and Egypt as a whole.