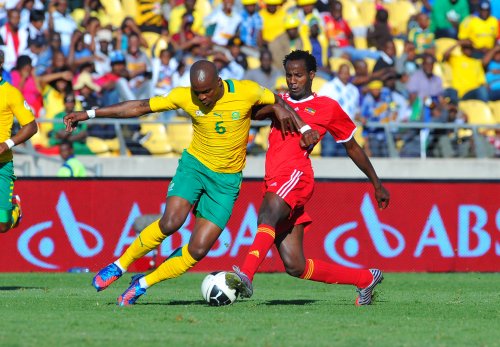 Can Ethiopia's Saladin Said (in red) be the hero again?

A revision of holding the Africa Cup of Nations to odd years, as opposed to even, has seen a fusion of haphazard, what-the-hell-is-going-on bamboozlement. To put it very simply, the round-robin system has been thrown into the lake, leaving countries which otherwise wouldn’t have qualified, or at least struggled to, with a two-legged contest for a ticket to African football’s centrepiece next year in South Africa; woohoo for the underdog! The final round of qualification draw produced a chock-full of spicy, tug-of-war ties. I’m not going to bore you with a look at Senegal v Ivory Coast because that has received enough coverage (and it's boring, unless you want me to post a 1000-word preview of Jean-Jacques Gosso), but I’ve cherry-picked some fixtures which may interest you. On with it:

In the lead up to the 2012 Africa Cup of Nations, Zambia’s most famous footballer and the current FA President, Kalusha Bwalya, predicted that the Chipolopolo would stun everyone and win Africa’s premier prize. Although there was no derision towards him – after all, a phalanx of big teams had failed to qualify and as Zambia were one of the strong teams it was perfectly plausible for them to have dreams and visions of grandeur – many dismissed it as the obligatory blind partisanship that comes as part of the package pre and during major tournaments; the majority of ears blocked by the superabundance of the Senegal strikeforce and the pluperfect Ivory Coast squad.

It’s also conceivable that Ugandan FA President Lawrence Mulindwa was equally dismissive when Bwalya raised concerns about Uganda minutes before the 2013 Cup of Nations final round draw was made. “If there is a country I want to avoid, it’s Uganda,” Bwalya announced when he turned to Ugandan counterpart, who was sat two rows behind him. “I told you,” he added a few minutes later when the two nations were drawn together, bemoaning his near clairvoyance.

Bwalya was concerned for good reasons. “Uganda is a country I have followed closely over the years. You look at the quality in the team and the performances they have had before and you see a team that poses a serious threat,” Bwalya told Uganda’s New Vision after the draw.”So, it’s going to be a very tough game for us.”

Indeed, a look at Uganda’s recent results shows that the Cranes have rightly stimulated an ominous cloud over the outcome of the tie for the Chipolopolo. Whilst they have not qualified for the Cup of Nations since 1978 (when they finished runners-up), under the tutelage of the avuncular Bobby Williamson, the Cranes have made assured strides in international football. They narrowly missed out on qualification for the 2010 Cup of Nations, and then they won the CECAFA Cup (a regional tournament for East and Central African national teams) a year later to complete a hat-trick as they added to their triumphs in 2008 and 2009. In the previous round of qualification, the Ugandans incredibly overturned a 3-1 first-leg loss to away to Congo with a 4-0 home demolition to progress   – with Williamson putting his bravura spectacles on and deploying three out-and-out strikers in his starting XI. Historically, this is also a tie that is near equilibrium – the two sides have met each other 30 times, Zambia have the slight edge with 13 wins and Uganda have 12 wins.

The pressure is certainly on Zambia, they have to win first leg and do so comfortably – Uganda have not lost at home since 2005, although there is a huge question mark about creativity in the side. Zambia have suffered three defeats in the six games they’ve contested since being crowned the African champions (though the 2-1 defeat to South Korea in a friendly can be mitigated by not having sufficient time to readjust to the change in time zones, and the fact that it was mostly a makeshift defence). It would be wrong to say they’ve taken their foot of the gas – sandwiched between the defeats was an impressive 1-0 win over Ghana to get their World Cup qualification campaign back on track, and coach Herve Renard has experimented in the friendlies – but they’re certainly no longer an unknown entity and teams are smelling blood, and the fact that they struggle to control the possession in games makes them very susceptible to a shock. Moreover, they’ll be fully aware of the demise of Egypt, who won the 2010 Cup of Nations and failed to qualify for the 2012 edition. African football is at the level where results on the pitch are no longer foregone conclusions due to your reputation.

Whilst this North African affair doesn’t have the historical vitriol of, say, Egypt versus Algeria or Morocco versus Algeria, the deteriorating political relations between these two countries have made this match-up spicier than the Spice Girls eating chicken tikka masala in a restaurant in New Delhi.  The relations have somewhat reached an impasse after the anti-Gaddafi National Transitional Council of Libya accused Algeria of supporting the late dictator by allowing him to traffic military paraphernalia and mercenaries through Algerian territory during the Libyan civil war.

On the green surface, Algeria are going through a reawakening after failing to qualify for this year’s Cup of Nations. Under the stewardship of peripatetic Bosnian Vahid Halihodzic, who was appointed last year, a much-needed dosage of creativity has been injected with the likes of Ryad Boudebouz and Sofiane Feghouli the pulse of the team, and in Rafik Djebbour, Islam Slimani and El Arb Hillel Soudani there finally seems to be roots planting for a strikeforce that is finally congruous with the country’s rich footballing tradition. Goals and creativity came at a premium under previous regimes, as those who saw the Fennec Foxes at the World Cup and the Cup of Nations in 2010 would attest, but good old-fashioned thrashings are finally being handed out.

Libya have also been through a reawakening of their own after decades of longueur (and having to do so with the ramifications of a civil war), making a splash in the Cup of Nations with a 2-2 draw against eventual winners Zambia in the torrential rain of Estadio de Bata, and slaying Senegal 2-1 in the final group game. Relative success from the tournament has been built upon with a memorable last-minute win over Cameroon in 2014 World Cup qualification.

Although the head to head record is 12-2-2 in Algeria’s favour, the recent renaissance of these two sides leaves it wide open.

This is a traditional rivalry and is made interesting by the fact that Ethiopia have their best of chance to qualify since 1982. Whilst they are a long away from their apogee just over fifty year ago – when they finished as runners up in the inaugural edition of the Cup of Nation, finished third in 1959, and were crowned champions in 1962 – qualifying would be a major achievement after years in the wilderness. Accomplishing qualification whilst slaying Sudan, their neighbours and bête noire, would make qualification sweeter than a sugar factory.

Sudan, the sole East African representatives in the last three Cup of Nations editions, had an excellent Cup of Nations campaign as they became the first East African side to reach the knockout stages of the tournament since Uganda in 1978, and recorded their first win in the tournament since 1970 (when they won the Cup of Nations on home soil). They bowed out to eventual winners Zambia, but they certainly gave them the biggest fright, and they got their revenge in June with a dominant 2-0 win over the African champions in the World Cup qualifiers.

Traditionally, it’s another close affair; Sudan have 10 wins and Ethiopia have 8 in the 24 times they have faced each other. As ever, Sudan’s players have been plucked from the oil tycoon-backed clubs Al Hilal and Al Merreikh. That coherency, and their bulging tournament experience, gives the Falcons of Jediane the big match temperament that will most likely see them through. Ethiopia won’t be any pushovers, though – even though it’s earlier stages, the Walya Antelopes currently sit proudly at the top of their World Cup qualifying group. In Saladin Said, who finished emphatically in their 1-1 draw away to South Africa, and scored a brace in their 2-0 win over Central African Republic, they have a shining star who thrives on occasions like these and one of Africa’s most unforgiving strikers at the moment. If there’s a shock, it’s hard to imagine him not being the protagonist.