The second semi-final was the last to be played in Poland, contested in the National Stadium in Warsaw. This game was a hotly-contested game between two powerhouses in the tournament: Italy and Germany. Italy came into the game into the game with an undefeated record against the Germans and planned to continue this outstanding record. Italy extended this record by beating the Germans 2-1, both Italian goals scored by Mario Balotelli and Mesut Ozil scoring a penalty for Germany. 1. Super Mario Shows His Brilliance 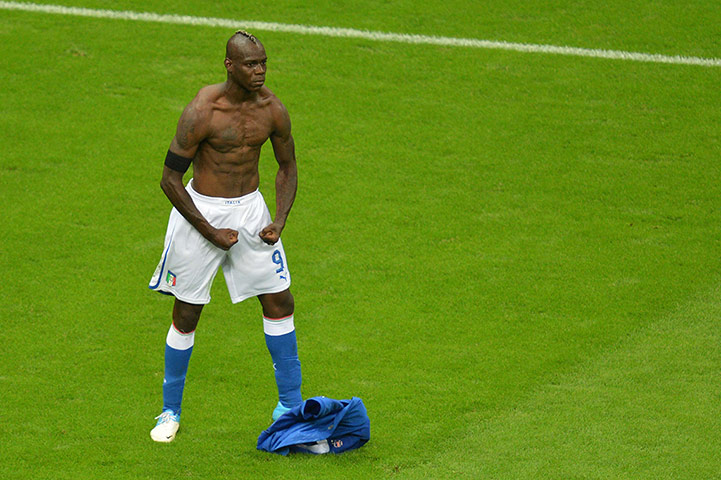 Adding to the collection of brilliant Balotelli celebrations

For all the criticism he has received from the pundits and media (I'm looking at you, BBC pundits), not to forget the amount of racial abuse he has received during the tournament. Mario Balotelli's mission was to not only make it into our Team of the Round, but also to prove all of his critics wrong. That's what he achieved tonight, scoring both of Italy's goals. He proved to be a handful for Badstuber and Hummels, both who have had excellent tournaments, by using his pace and knowledge of attacking positions in order to score the goals via a header and beating the offside trap. I told you to look out for him, didn't I?!

2. German’s Awaken In The Second Half…

A pretty dismal first half performance was improved upon in the 2nd half by German. The introduction of Marco Reus, who scored in the game against Greece, provided a new dimension to the German attack with more skill, pace and energy. Towards the end, Germany won a penalty (which was subsequently scored by Ozil) and Manuel Neuer made several advances up front to aid the attack. In total, Germany made 9 shots in the second half.

Depsite all of that effort, Germany were unable to equalise and take the game into extra time. Italy’s defence seemed to be solid, with Buffon, Barzagli and Bonucci having a solid game for the Italians. Just 8 out of their 15 shots were on target.

4. … Although Italy Were Just As Wasteful

Italy should have buried the game once they had the chance. Cassano and Balotelli leaving the pitch seem to have reduced the potency of the Italian attack in the second half, with the Azzuri throwing away so many opportunities to increase the daylight between the two sides. In the 2nd half, only 1 of Italy’s 6 shots were on target, which is pretty awful if you compare it to their 4 out of 4 in the 1st half. Di Natale and Marchisio were lucky to get away with their inaccuracy in front of goal

Italy vs Spain in the Final. Unbelievable. Most people wrote off Italy, but now they are only one step away from winning the trophy. The group stage game saw a 1-1 draw between Spain and Italy, but something tells me that this game will be different. Both teams will not only rely on what they learnt from when they faced each other in the opening group stage games, but also from paying attention to each other’s knockout stage matches. Preview of the final will be posted up soon!