A highly anticipated match, Portugal squared-off against the European and World Champions Spain in the first semi-final. With what was seen as a tense game by some, boring by others and alright by the rest, the game managed to go to penalties, with Spain winning 4-2 in the end, thus advancing to the finals. 1. Both Sets Of Full-Backs Were Brilliant... 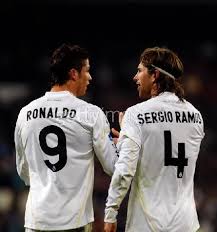 The Real Madrid teammates were involved in a key battle today

A vast array of attacking was exhibited by all four full-backs during the game. Portugal's two full-backs Coentrao and Pereira provided that extra dimension in attack that Spain found difficult to contain. Combined with Nani and Ronaldo on the flanks, Portugal seemed to be a threat, especially in the 1st half. The 2nd half, however, saw the Spanish full-backs step up to the podium, most notably Sergio Ramos who even outpaced Ronaldo at one point. To praise him further, Ramos had the highest pass completion in the whole match: 89 pass, 76 completed, 85% completion rate, which is slightly more than his teammate Xavi who racked up an impressive 84% completion rate.

2. … But Both Sides Were Wasteful

In the first half, shots on target stats were: Portugal 2-0 Spain. In the second have, shots on target stats were Portugal 0-1 Spain, with Spain having their first shot on target registered at 67 minutes. In terms of midfield and defensive battles, it was spectacular. In terms of making the most of their chances, both teams were relatively poor. Infact, Portugal did not even make one attempt on target after the 45 minutes mark, going 75 minutes without hitting the target. Spain did make things more interesting in extra time though, make 4 shots on target and forcing Rui Patricio to stay awake in the Portuguese goal.

3. Ronaldo Wanted The Moment For Himself

“Maybe I should have went first”

Probably wanted to be branded as a hero. To put things straight, he should have put himself forward to take one of the first penalties. Nobody questions Ronaldo’s talent, skill and determination to win a game, but all of these positive attributes seem to be shrouded in a thick cloud known as his ego. The chance to beat their neighbours and be in the spotlight was there, but he did not get the chance due to Alves missing his penalty kick.

4. Nothing Beats The Excitement Of Penalties

The first penalties for both teams saved. Ramos with a Pirlo-esque penalty. Fabregas scoring the winner. Ronaldo not taking a penalty. If you are a Spanish or Portuguese supporter, your heard would have been in your mouth during the penalty kicks. Some may have found the 120 minutes boring (although, I found it tactically interesting), but the penalty shoot-out at the end probably made their night. We saw that England and Italy provided excitement in their penalty kicks and it seems Portugal and Spain decided to replicate, if not improve, on the quarter final shoot-out. We may potentially see 2 more penalty shoot-outs in the remaining two games of the tournament, but we also would like to see a more intense 90 minutes.