The first Quarter Final match saw Portugal face off against Czech Republic. Neutrals were expecting to see Ronaldo continue his run of form and also to see Petr Cech improve his form, subsequently receiving both. After a tense tie, Portugal emerged as winners, with Christiano Ronaldo heading in the only goal of the match, concluding the game at 1-0. 1. Portuguese Talisman Shines Again 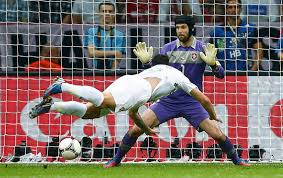 Ronaldo nods in the only goal of the game

Carrying over his blazing run of form from the previous game, Christiano Ronaldo is currently on fire, scoring the winner and only goal of the game after getting on the end of a superb cross to head the ball towards goal. He had numerous opportunities beforehand, hitting the woodwork on numerous occasions just like he did in the Group Stages. Not only he create a lot of opportunities, he also bullied the Czech Republic defence, who found him quite difficult to contain. With the semi-finals coming up soon, Portugal are one step closer to lifting the trophy, something that Ronaldo craves.

2. Cech’s Best Performance Of The Tournament?

Petr Cech has admittedly produced some of the nerviest performances we have seen from the Chelsea goalkeeper in a while, conceding soft goals and making clumsy mistakes. Maybe he steps up his game during the knockout stages, making numerous spectacular and important saves to prevent Portugal from gaining a hefty amount of goals in the match. He will also be placed in Martin Keown’s good books, after he collided with his own player to prevent a goal scoring opportunity, much to Martin Keown’s approval.

While Ronaldo gets the majority of praise from the press, Fábio Coentrão also deserves a share of the praise. The left-back is playing behind probably one of the most attacking forwards in the tournament who rarely tracks back, yet Coentrão constantly supplements the Portuguese attack down the left-hand side and still manages to track back. This was evident during the match, constantly bombing forward in order to help out with the attack, becoming an additional threat for the Czech Republic. 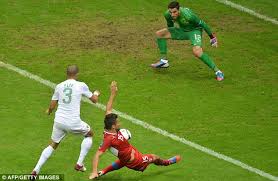 Baros fails to get on the end of a cross

What can I say? Milan Baroš did not have an impressive tournament, yet alone an impressive match. The only memorable moment of the match was that he committed two fouls. The striker announced his retirement straight after the match, which may pave way for a younger generation of Czech strikers to fill in his boots and (hopefully) put in a better performance than he did in this tournament. We wish him well.

SFG Man of the Match: Ronaldo