On Thursday night Portugal will take on the Czech Republic in the first of the quarter finals, here's a look at how the two sides have done so far, the battles that may shape the match and who will come out on top. 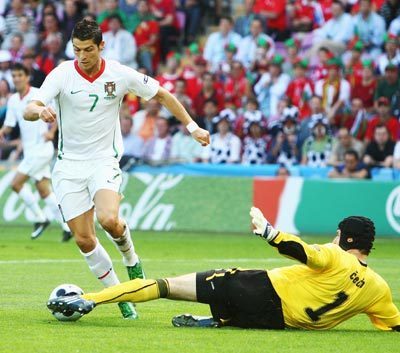 Road to the quarters

Czech Republic – After opening day humiliation at the hands of Russia, the Czechs looked a sure bet for an early exit, but 2 goals in the first 6 minutes against Greece saw them go on to secure a win and move back into contention. Coming into the last game off the back of a valiant fight back against their Russian rivals, many thought that co-hosts Poland would have enough in them to win. They didn’t. After surviving several early scares, the Czech Republic scored a well taken goal on the break and thanks to Greece’s shock win over Russia, they topped the group, setting up a quarter final date with Portugal. Portugal – Like their opposition, the Portuguese suffered a loss in their opening game, though being an unfortunate narrow loss to Germany perhaps there was less cause for concern in their camp. Despite letting a 2 goal lead slip, a late great Varela finish secured a win against Denmark which meant beating the Netherlands would send them through to the quarters, a draw being enough should Denmark fail to beat Germany. An early Van der Vaart effort put their hopes in doubt before Ronaldo came good, well, more than good, scoring 2 goals in a brilliant individual display he helped the Portuguese secure second spot and progression. 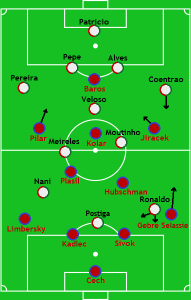 How they’ll set up

With Rosicky most likely still missing through injury, the Czechs should start the same team that faced Poland – Kolar filling in. Having been largely ineffectual thus far, Baros may be dropped for a quicker alternative, but the experience he brings combined with his contribution to the goal in that match against the Poles may save his space. Portugal will be expected to line up in an unchanged 4-3-3; Ronaldo coming in from the left and Nani drifting around on the right with both fullbacks pushing forward to join them. Hubschman has been an imperious figure at the base of the Czech midfield in their last 2 games, his ability to deal with Meireles and particularly Moutinho will be a decisive factor in the running of the game. Due to their relative lack of creative offerings through the centre of the pitch, Portugal have often looked to exploit their men in the wide areas throughout the group stages. With the Czechs’ main threats lying out there too, these are the areas in which we may see the other… 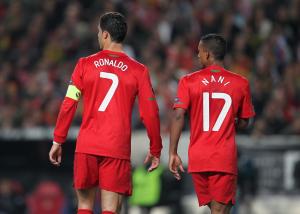 Can Ronaldo and Nani work wonders out wide?

Ronaldo vs Gebre Selassie – Theodor Gebre Selassie has impressed all so far with his dutiful defensive work and forays forward; his exchanges out wide and overlapping runs have been a crucial component in the Czech Republic’s attacking approach. However, having to deal with a player who possesses the pace and quality of Ronaldo will no doubt disrupt his game. Ronaldo failed to impress on his first 2 outings but having shone against the Dutch, the indications are positive for Portuguese fans. If he can bring that same level of quality to this game, Gebre Selassie will have a huge task keeping him quiet. Even if Ronaldo fails to deliver, the threat he poses merely by being on the field will significantly reduce Gebre Selassie’s attacking contribution which in itself is a bonus for the Portuguese. It’s worth noting that Ronaldo’s failure to track Lars Jacobsen was instrumental in the Danes’ comeback from 2-0 down, should the Portuguese take a lead and the Czechs be left in an all or nothing situation, Ronaldo will have to adapt his game or risk a repeat.

Nani vs Limbersky – Like his right sided counterpart, David Limbersky doesn’t lack the pace or confidence to get forward and join the attack. Brought into the side after the loss to Russia, the left back has put in 2 impressive performances and the way in which he handled the threat of Jakub Błaszczykowski has earnt him many an admirer. If the Czechs are to prosper, he’ll need to put in an equally inspiring performance against Nani, a player whose creative abilities have come to the fore in his last 2 games as he’s made an assist in each – a figure which may have been higher had there been a better central striker to pick out.

Or will Jiracek and Pilar punish the Portuguese?

Jiracek vs Coentrao – In scoring vital 2 goals and showcasing his ability to drop deep, pick the ball up and run at defences, Petr Jiracek has been one of the stars of Group A. Fabio Coentrao himself has enjoyed coming from deep to help overload opponents; it was his cross that assisted Varela’s all important winner against the Danes and he was unlucky not to get on the score-sheet himself against the Netherlands.

Pilar vs Pereira  – The last of the 4 fullback/winger pairings sees Joao Pereira up against Vaclav Pilar, a duo whose club form has seen them earn summer moves to Valencia and Wolfsburg respectively. Pereira did a great job of keeping the likes of Podolski and Sneijder quiet in the group stage whilst also making a crucial contribution at the other end – assisting the Ronaldo goal that put Portugal back level with the Netherlands. But Pilar perhaps stood out more – his pace, evident for all to see, has been a constant threat. He’s played his part in all 3 of the Czechs’ games; scoring against Russia and Greece and taking Piszczek out of the game against Poland. If he was able to have such an effect on Piszczek there’s little to suggest he won’t be able to against Pereira.

Summary – All 4 of these key battles essentially consist of the same idea: the match up of pacey fullbacks that like to get forward with pacey wingers. The pace the wingers all possess would be expected to incite fear and pin the fullbacks back, stopping them offering an extra option in attack. Portugal’s quality in Ronaldo and Nani may see Pilar and particularly Jiracek drop deep to help out defensively; this will make it easier for the Portuguese fullbacks to get into the game. However, if the Czechs are under such spells of pressure, their own fullbacks could be useful weapons on the counter attack. The game has the potential to become an enthralling encounter of cat and mouse at both ends and on both flanks, the question is…

The bookies have Portugal down as odds on favourites and few would deny they possess the greater quality in their squad, but the game isn’t a foregone conclusion. The Czechs’ have looked weak once taking a lead in both of their last 2 games, this may be an issue with mentality or may be that they’ve been instructed to primarily defend and they struggle in that department. If this is the case, perhaps sitting deep from the outset would be a bad idea. The alternative however, we saw in their opening match against Russia – a team, like Portugal, with a penchant for counter attacking – on that occasion they were punished and despite notable changes in personnel, such an approach would still be a risk. Having weathered an early storm against Poland, causing pressure to rise on their players who ultimately failed to deliver, perhaps sitting deep would indeed be the best approach to take – Ronaldo’s collapses under pressure have already been illustrated in these championships and if the Czechs can keep him at bay long enough, they may induce another one.

Prediction: Czech Republic 1-3 Portugal – the Czechs coming undone as they leave space in behind whilst chasing a deficit.